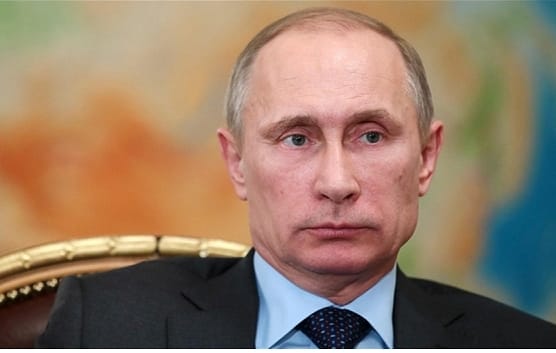 Russian President Vladimir Putin in a meeting with the Turkish Ambassador issued a verbal ultimatum calling for an immediate end to Turkey’s support for ISIS and violations of Syria’s sovereignty.  In doing to, Putin has drawn a red line over Syria, after weeks of escalating NATO moves against that beleaguered nation.

In a startling move, Russian President Vladimir Putin castigated Turkish President Recep Erdogan, calling him a “dictator” and threatening to sever diplomatic ties with Turkey over what Putin claims is Erdogan’s continued support of the ISIS terror organization.

It is believed that this is in response to Erdogan’s claim, pasted across the western press yesterday, that Putin had told him Russia was no longer going to support Syria in their war against al Qaeda, ISIS and their western backed sister organizations.

Putin summoned Turkish Ambassador to Moscow, Umit Yardim to the Kremlin for what turned out to be a two hour diatribe by Putin with fiery accusations returned by the Turkish Ambassador.  This is the best translation of key statements made by Putin:

“Tell your dictator Erdogan to go to hell and that unless he stops well established and easily proven support for ISIS, Russia will sever diplomatic relations.  We are  prepared to turn Syria into a big Stalingrad for Turkey and her Saudi allies and their vicious little gang of Hitlers.

Your little dictator is a hypocrite, attacking the military coup in Egypt while, at the same time, he is trying to overthrow the elected government of Syria. As it stands, China, Iran and Russia will guarantee the survival of Syria.”

In an article by the Moscow Times, a publication controlled by CIA contractor Booz Allen Hamilton, a different version is given with Ambassador Yardim shouting down Putin and blaming Russia for all of Syria’s ills.  As an illegally foreign owned media organization, the Moscow Times is being sold to Russian owners by government decree with change of ownership coming in September 2015.

The meeting is said to have lasted over two hours and to have been behind closed doors.  The version we have of statements made were leaked by sources close to President Putin. We believe the statements quoted above are to be considered an ultimatum

Yesterday, President Obama announced that the United States would provide air support for US trained jihadists fighting inside Syria.  The White House statement may well have been misquoted by the Murdoch owned Wall Street Journal.  The Journal, in another case of “mission creep,” quoted spurious anonymous sources in the Pentagon embellishing the president’s statement to include air attacks on Assad forces.

It is very possible that the White Houses’ failure to demand a retraction for the WSJ story until early this morning Washington time may have been a contributing factor to Putin’s rage.  To a large extent, the Wall Street Journal has become an organ of Netanyahu’s schemes since Murdoch bought the publication  in 2011.

Netanyahu has long seen himself as the ultimate winner in any military confrontation between Russia, China and NATO and Japan.

One other possible contributing factor in Putin’s attack on Erdogan is the issue of the downing of MH17, the Malaysian Airlines flight shot down over Ukraine.  Last week, Russia vetoed a move in the United Nations Security Council to set up an unprecedented investigative tribunal to adjudicate the issue based on the yet to be released results of the Dutch (NATO) investigation.

Russian Foreign Minister Lavrov made it clear that he has no confidence in a NATO run investigation and that Russia sees this as an attempt by the west to spin what Russia sees as a Kiev backed false flag terror attack into a propaganda victory against Russia.

Russia sees the continued attempt to blame the downing of MH17 on a Russian BUK missile when no evidence whatsoever exists supporting that scenario, one the western press has adhered to unflinchingly.

Russia has tried to present evidence, backed by German based forensic investigators, that MH17 was shot down by a Kiev based SU25 seen by multiple radars closing in on the Boeing 777 aircraft immediately prior to its downing. The west has refused to consider this evidence much as the west had refused to accept evidence of Turkey’s use of chemical weapons against civilians inside Syria.

In 2012, Russian investigators attempted to present scientific evidence of the use of Turkish sarin gas by al Nusra forces near Aleppo.  The west refused to look at the evidence even when Turkish prosecutors had ordered the arrest of both Turkish nationals and foreign backed terrorists who were operating sarin production facilities inside Turkey.

It wasn’t until the possibility of military confrontation between the US and Russia became a reality that President Obama accepted the Syrian version of events.  Investigative journalist Seymour Hersh outlines this confrontation and Erdogan’s role in the use of sarin gas against Syrian civilians in his book, The Red Line and the Rat Line.

In June 2015, Erdogan failed to win a majority in a national election, one swayed from Erdogan by a large Kurdish opposition vote.  Erdogan has continued to rule without forming a government giving credibility to President Putin’s claim of Erdogan’s dictatorial rule.

It is estimated that a minimum of 25,000 ISIS fighters have transited Turkey into both Syria and Iraq since 2011. In the last 18 months, a number of Turkish officers have been killed or captured inside Syria.  Additionally, most ISIS and al Nusra fighters captured by Syrian, Kurdish and Iraqi forces have told of Turkey’s full complicity in their terror operations.

It should be noted that the terror attack of June 20, 2015, purportedly by ISIS against Erdogan’s Kurdish political opponents in the town of Suruc, was used to provide a rationale for the Turkish air assault on Syria and Iraq.  Turkey has flown hundreds of sorties against Kurdish villages along with providing air support for ISIS terrorists fighting against Kurdish forces of the YPG and PKK.

Another major factor involves a sea change in Saudi relations in the Middle East.  In an article today from the Fars News Agency in Tehran, we read the following:

“In the context of the Russian initiative to sustain the Saudi-Syrian rapprochement, KSA Intelligence Chief may visit Damascus by the end of August, according to well-informed sources.

More than 200 Saudi are arrested by the Syrian authorities over their terrorist activities as 700 others have joined the militant groups which are fighting the Army, Al-Manar reported.

The sources added that the Russian side has managed to convince the Saudi leaders that battling ISIL and all the terrorist groups is of a great importance for all the regional countries.

Russia considers that preserving the Saudi-Syrian-Egyptian triangle will preserve the political and security situation in the Middle East and that if the terrorist groups manage to destroy this formula, terrorism will invade the whole region and reach Europe, according to the sources.

The sources note that the Saudi-Syrian convergence is expected to reach fruitful results yet that it needs time for KSA to arrange its internal files in preparation for a strategic change.”

With NATO moves in the region, including air defense weapons for Latvia, the militarization of Poland and America’s silence on Kiev’s continued violation of the Minsk peace accords, Putin may well have chosen Erdogan as the “weak underbelly” of NATO.  With Erdogan’s domestic political problems and his possible complicity in staged false flag terror attacks against political rivals, civil war in Turkey is a very real possibility.

With NATO voting last week to back Turkey’s moves against Iraq and Syria “without question,” Putin may well be extracting payment from the United States for 14 years of unreasoning bellicosity.