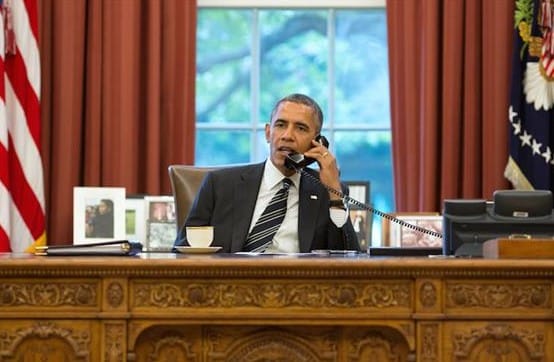 [ Editors Note:  Obama is calling out his troops to make a good showing in the Congressional lobbying for the Iran deal. He knows that the wavering votes want to see if there is grassroots support shifting to push back on the Israeli Lobby.

This is turning into a good heads up fight with the Israeli Lobby, and a big victory if they can be beaten badly, as that can sow the seeds of going over onto the offensive with them after this fight is over, with phone campaigns to poll all the Congresscritters about Israeli espionage and their lobby influence here, in terms of its being a national security threat.

They have never had it put to them this way in the past, and I assure you it can be a game changer. “Their” doing everything they can to kill the Iran deal has exposed them as they never have been before. They have bet there is no real downside to them, even if they lose.

Obama is clubbing them again with “these are the same people who brought us the Iraq war” — a good hammer to use now, and he even went after the NeoCon media shills, something I don’t remember seeing him do before. So we need to pay attention to the shifting ground here.

All the Dems and the few Repubs who will support the deal need to see they have support, as this is a two-flank fight… punish the NeoCons and Israel shills, and support those helping to change the game. Make those calls and write those emails… Jim W. Dean ]

US President Barack Obama has called on his Democratic allies to support his nuclear agreement with Iran, saying opponents are spending millions of dollars in order to sabotage the deal and try to make another war.

“As big of a bully pulpit as I have, it’s not enough,” Obama said on Thursday. “I can’t carry it by myself.”

He urged his supporters to stop “the same columnists and former administration officials that were responsible for us getting into the Iraq war.”

The US president made the comments when he spoke by phone with thousands of people from liberal activist groups, Organizing for Action, Center for American Progress and Credo Action, The Hill reported.

“The facts are on our side, but the politics are going to be tough if all of you don’t get involved and get active,” he said.

He also reassured that he has “never been more certain about a policy decision than this one.”

Obama noted that his opponents are spending $20 million on television ads lobbying against the nuclear agreement reached between Tehran and the six world powers in Vienna on July 14.

“If you’ve got a whole bunch of folks who are big check writers to political campaigns, running TV ads, and billionaires who happily finance Super-PACs and they are putting the squeeze on members of Congress, even well-meaning ones, and good folks, and they don’t hear from you, this opportunity could slip away,” he said.

A group affiliated with the American Israel Public Affairs Committee has raised $20 million to convince members of Congress to reject the Vienna accord.

Congress is reviewing the agreement and will vote on it in September.

According to the text of the agreement, Iran will be recognized by the United Nations as a nuclear power and will continue its uranium enrichment program.

Iran sanctions are set to be removed in exchange for some limitations on the country’s nuclear energy program.

Most Republicans oppose the nuclear agreement, but they need a two-thirds vote in both chambers of Congress to override a presidential veto and to reach that threshold, Republicans need Democrats’ support.