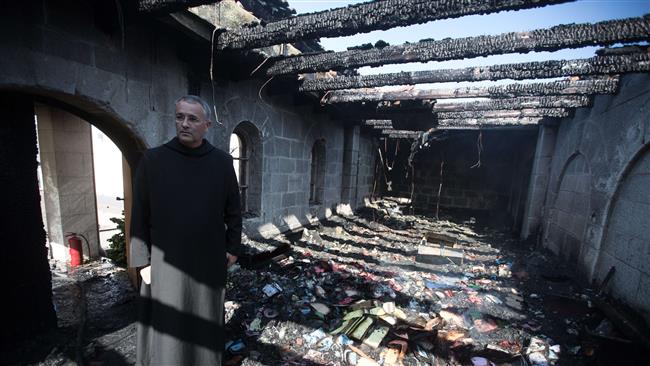 Photo Credit: This June 18, 2015 photo shows a priest inspecting the damage at the complex of the Church of the Multiplication on the northwestern shore of the Sea of Galilee after an arson attack. (AFP photo)

Many years ago I was listening to an interview on a radio station called 702 in Johannesburg South Africa. I was particularly interested because for many years, as any of you who have read my articles know by now, I have spent almost my entire adult life trying to make sense of that book called “The Bible.”

The interview was with a Rabbi from New York. His subject matter was the return of the Messiah, the end times and the rebuilding of the temple in Jerusalem. The gentleman who was interviewing him was a black South African. The interview took place shortly after the fall of the Apartheid system and Nelson Mandela was president.

The upshot of what he had to say as I outlined in my article Jesus Was A Palestinian, was that only the “chosen people,” the descendants of Adam, being the Jews, would be allowed into the holy city to worship Messiah David. And the rest of humanity, because they are not sons of Adam, would only be allowed to worship outside of the city walls. The fact that this construct is an Apartheid system, racist on many levels and a total insult to all South Africans especially after what the country had been through, seemed to escape him.

Many of us phoned in and pointed out that in southern Africa we have a black Hebrew tribe called the Lemba. He immediately responded that the ten tribes were lost, never to been seen from again and was adamant on this point. Something I have previously discussed and something that the “Jews”were as misguidedly adamant about 2,000 years ago as they are today. He concluded that the Lemba must be converts and certainly not Jews. He also pointed out that Noah had cursed Ham, but if you read the text Noah cursed Canaan, the father of the Canaanites, a Semitic tribe and what is more Tamar, the wife of Judah, was a Canaanite. So now you know what that makes David. Son of Adam and a Canaanite.

But the Rabbi was right. The Lemba are not “Jews,” ie, from the tribe of Judah, as I have made very clear in my previous articles concerning Israel and the difference between the Northern Kingdom of Israel and the southern Kingdom of Judah. The evidence proves that the ten tribes are most certainly not lost and many of them can be found throughout Africa today and they are black, not Semitic.

The radio listeners also pointed out that the Lemba had been genetically tested and their bloodline had been traced to the high priesthood, the Kohan of Samaria, in other words the descendants of Ephraim and Manasseh and in turn Mosis. He had no reply to that and the airwaves remained deathly silent. Everyone, including the black announcer who interviewed him. Put it this way, we were all being polite. In truth this reaction was a clear indication of disgust.

There is one thing I have learnt in life. We often learn more from those we disagree with than from those who we do agree with. His interview, which I found to be an alarming religious and political perspective sent me on a new quest for truth. He had, in effect, pointed me in the right direction. So I guess I should thank him for that.

The crisis in Syria in the last couple of years has also left me horrified, particularly the persecution of the oldest Orthodox Christian communities in the world. What has compounded this issue is the assistance given to the ISIS terrorists by Israel on the Golan heights. They have in effect, lent a had to the decimation of the Orthodox Christian Church.

Today I scanned through Press TV. One headline screamed out.

Dare I pose the question? Surely it is obvious by now? Is this not  what is called the Anti-Christ as it was 2,000 years ago?

The torch bearer Benzi Gopstein, justifies his statement by accusing Christians of idol worship. So I put the following to him:

1. When the Jews, ie the tribe of Judah returned from Sumeria the first thing they did was build a temple. The Samaritans objected because a temple in and of itself is an idol and a form of idol worship. Today they worship in front of the “Wailing Wall,”bowing down to it. Seriously? They pray to a wall? You can see them in their black hats and ringlets bobbing up and down and they even put pieces of paper into it like the wall is going to talk back to them. “Jews”dream of rebuilding this temple. It is their reason de etre. Perhaps in this quest for stone and mortar they have forgotten the Covenant and the first commandment?

2. The Menorah. Isn’t this candle stick holder that is found in every “Jewish” home an idol?

3. The Star of David, idolised the world over by “Jews.” Isn’t this idolatry?

This then is the world of Messiah David. Christian/Zionist fundamentalists should think long and hard about that. And remember, you are NOT descended from Adam. Only the Jews are. And they will tell you that in no uncertain terms. Which means that you are not responsible for any of the “sins” committed by Adam and Eve, this is the sole preserve of the “Jews,” the chosen people, for this function.

So, let them have it, let them get on with it. It is not your concern. And they can have Messiah David all to themselves couped up in that little city on, quite frankly, a crummy piece of real estate. The Lemba left long ago, and for 2,700 years and been enjoying the beauty of Africa instead.

You have no need for this salvation. Hand them Genesis 2 with your blessing, then turn around and embrace Genesis 1 where you are welcomed and loved with open arms. Male, female, black, white or green. We are all made in Elohim’s image, within the seven holy days, not outside of it.  We have no need for pot effigies made of clay. God is the God of the living, not the dead and you cannot worship two masters, for you will surely betray one of them. The Kingdom of Heaven is the size of a mustard seed not a temple.

I am the light that is above them all. I am the all; the all came forth from me, and the all attained to me. Cleave a (piece of) wood; I am there. Raise up a stone, and you will find me there.