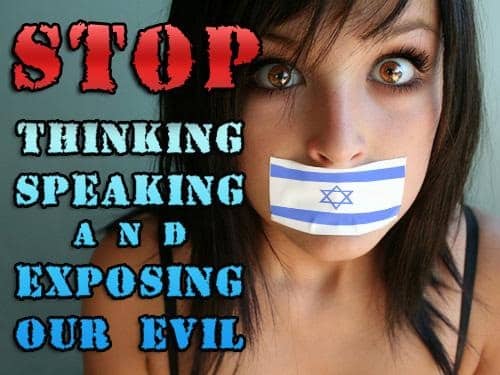 As I wrote in my recent article “Canadian police target conspiracy theorists,” the B’nai Brith – a Jewish freemasonic group – harassed organizers and tried to shut down my book talk in Edmonton, Alberta last week. When they failed to get the event cancelled, they called in the Hate Speech Squad of the Edmonton Police Department…who listened to the talk and found nothing wrong with it.

Now we learn that the same B’nai Brith also tried unsuccessfully to get my Jasper talk cancelled.

Monika Schaefer, the organizer of the Jasper talk, reports:

“It was indeed the B’Nai Brith who tried to shut down the Jasper event too. What a surprise, isn’t it?!”

B’nai Brith’s attempt to silence me failed even more spectacularly in Jasper than in Edmonton. The Zionist censors not only failed to convince the United Church of Canada to cancel my talk, but were likewise unable to intimidate the media.

Check out the excellent coverage provided by the Jasper Local:

“Nobody except those with their head deeply in the sand could deny it.”

He doesn’t care if you think he’s a loonie, or a nut, or if you roll your eyes when you hear the word “truther.”

If he cared about all that, he wouldn’t have staked his career on exposing the official story about 9/11. He would have simply put his head down like a good academic and shut his mouth.

Instead, he pursued his research, finding gaping holes in the U.S. government’s official version of the events on September 11, 2001.

As such, rather than earning tenure, he earned a “Scarlett T.” Rather than accepting an offer for a cushy post-doc at the University of California, Barrett joined the Scholars For 9/11, making him the subject of a witch hunt. Rather than bow to pressure from 61 Wisconsin legislators who signed a petition to remove him from the university where he taught, he wrote a book called Truth Jihad. And so, no, Kevin Barrett doesn’t care much if you think he’s a tinfoil hat-wearing, inside job-professing wacko.

What Barrett cares about is engaging with anyone who’s interested in questioning the powers that be.

“I think it’s the most important issue of the 21st century,” he said about the Truth Movement. “Anyone interested in participating responsibly in democratic governance needs to investigate this issue.”

Barrett, along with Canadian author and professor Anthony Hall, spoke to a Jasper audience on August 14 about his new anthology We Are Not Charlie Hebdo: Free Thinkers Question the French 9/11. In it, Barrett and 20 other leading public intellectuals argue that the murderous shooting spree at a French satirical newspaper office in January was not the work of Muslim extremists, as reported. He and Hall make the case that the Paris attacks—as well as the October 2014 Ottawa shooting—were “false flag” operations: set-up jobs to further the persecution of Islam and to justify enhanced national security legislation such as Canada’s recently passed Bill C-51…

[For the full story in the Jasper Local, click here]