The Edmonton Police Department’s  Hate Speech Squad has launched an investigation of a scholarly book that questions the War on Terror. 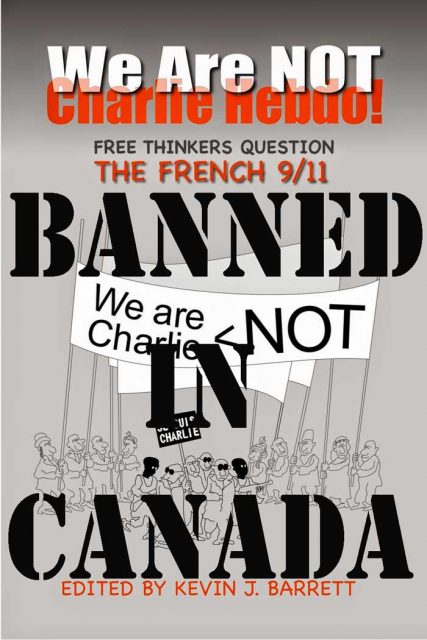 On August 16th, two undercover EPD officers attended a book talk at the Rossdale Community League Hall in downtown Edmonton. The officers were investigating  We Are NOT Charlie Hebdo: Free Thinkers Question the French 9/11, which has apparently elicited complaints from B’nai Brith Canada.

Out of uniform and posing as ordinary audience members, the Hate Police officers watched my book talk.  During the intermission between my lecture and the subsequent presentation by University of Lethbridge professor Anthony Hall, the officers flashed their badges and identified themselves as members of the Hate Speech Squad. They said they had received a complaint referencing “conspiracy theories” and “anti-Semitism.” (How a scholarly book that includes essays by several highly accomplished and reputable Jewish contributors, as well as one by an even more Semitic Arab Muslim, can be called “anti-Semitic” is a mystery.)

The lead officer told me: “I didn’t see any problems with anything I heard during your lecture.” On behalf of the Department, he accepted an autographed copy of We Are NOT Charlie Hebdo dedicated “To the Edmonton Police Department Hate Speech Squad – thank you for thinking freely.” The officer said the book will be placed in the Departmental Library.

The Edmonton PD’s We Are NOT Charlie Hebdo investigation raises interesting questions. Are Canadian police departments now charged with giving a “thumbs up” or “thumbs down” to books and book talks? Are Hate Speech Squad officers getting training in literary criticism, investigative journalism and historiography so they can serve as competent peer reviewers and censors? Had the officers disapproved of the lecture, could they have arrested us? If they later read the book and dislike it, will it be banned in Canada? Conversely, if they like it, might they offer a blurb: “Terrific stuff! Certified 100% hate free by the Canadian hate police!”

But seriously, folks: Doesn’t the policing of books and book talks have a chilling effect on freedom of speech and academic freedom? And how and why did this particular book draw the attention of the Hate Police?

“The person who stated you were involved in hate crimes is Amanda Hohmann” emailed Joanne David, the Edmonton event organizer, to Anthony Hall. Amanda Hohmann is the Coordinator of the B’nai Brith Audit of Anti-Semitic Incidents.

Professor Hall was outraged: “They call themselves the B’nai Brith Audit of Anti-Semitism. Auditing! We live in an era of auditing fraud. The banksters are experts in disguising what’s going on through creative bookkeeping. It’s interesting that the concept of audit is now being applied to policing people’s ideas.”

So who was responsible for sending the Hate Police to our book talk? Anthony Hall was unable to get a straight answer:

“I called the B’nai Brith office but wasn’t able to speak to Amanda Hohmann. I asked to speak with CEO Michael Mofton and Senior Legal Counsel David Matas. I indicated it is a serious matter and that I have never been associated with a hate speech crime. So I want to know who complained, what is the nature of the complaint, is there  a text involved? It seems that someone said that our speaking was going to somehow be a violation of some hate speech principles. I wanted to know what the rules are, if there are any rules. Are people just free to snitch anonymously? Can people turn in their partner because they’re mad at him or her? It gets to the whole essence of the Global War on Terror, that people are subject to these repressions. They don’t know what they’re accused of, who is doing the accusing. There’s no due process. It’s an authoritarian police state atmosphere, an East German Stasi type of worldview. And this is creating maximum dissension, distrust and suspicion of one another. And this seems to be the agenda of neocon tyranny. Here we are right in the midst of an election. These issues are front and center. Bill C-51, now the Anti-Terrorism Act 2015, is like the Canadian Patriot Act. (Bill C-51 was passed in the wake of Canada’s 9/11, the Ottawa shooting of 10/22/2014.)

“The Anti-Terrorism Act empowers CSIS, the Canadian Security Intelligence Service, to become a kind of Canadian gestapo. This raises the question: Is the B’nai Brith now an adjunct of CSIS? How are we to tell the difference between the B’nai Brith and the Harper government? And of course there’s so much irony, because the specious interpretations of 9/11, 10/22 (the Ottawa shooter event), the Charlie Hebdo event, and so on amount to hate speech! Their purpose is to generate hatred towards Muslims, and to whip up and instrumentalize and exploit Islamophobia for political gain to the neocons. So the agencies responsible for policing and arbitrating hate speech are deeply involved in generating a type of speech, and defending a type of speech, that creates great hatred towards Muslims.”

As of this writing, B’nai Brith has not returned Professor Hall’s phone calls asking for an explanation. Neither, for that matter, have the Edmonton Hate Police:

“I called the Edmonton Police Department. I couldn’t even find out the name of the officers. They gave me the phone number of the Hate Speech Unit. I called and left a message, but they haven’t gotten back to me.”

Richard Awid, manager of the Rossdale Community Center in Edmonton, said there had been several complaints asking him to cancel the event. The complaints were apparently vague and unsubstantiated. Awid, to his credit, stood his ground and allowed the book talk to proceed.

The Edmonton talk was the final episode of my five Canadian events with Anthony Hall. Two days earlier, our talk in Jasper was introduced by a forceful disclaimer disassociating the owner of the venue – the United Church of Canada – from the event.

“This experience we went through in Jasper and especially in Edmonton seem to be a prelude to the kind of relationships  we can expect with the police, the government, and one another. This kind of thing is going to make the university as we’ve known it impossible. I can foresee security clearances for classes and Hate Police officers sitting in.”

In today’s Orwellian world, it seems that critical inquiry is being redefined as hate speech, radicalization, or even  terrorism.

The B’nai Brith Canada website states: “In the future, the League will explore further use of legal means to halt or disrupt the operations of known terrorist organizations with representatives in Canada. The B’nai Brith legal department will play a key role in this effort.”

Are scholarly books now considered a form of terrorism?

Anthony Hall adds: “I find it very troubling that there is this notion of ‘radicalization,’ that everyone just nods their heads assuming it means something. Are universities being defined as agents of radicalization, and professors considered their representatives?”

Hall adds: “The most extreme agent of radicalization in Canada right now is Stephen Harper and the cabal he represents. Imagine having a hate speech hotline when the Prime Minister is running on hate speech! The term he always uses (to incite hatred of Muslims) is ‘jihadism’.”

Will anyone ever explain who sent the Hate Police to my book talk, and why? If those people made slanderous accusations, will they have to answer for them? Stay tuned to TruthJihad.com for updates.