Home Investigations The quiet killings in Qandil: ‘Silence is consent’ 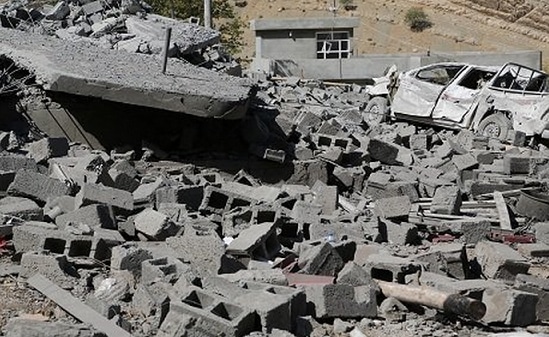 Turkey’s airstrikes on Zargali resulted in the deaths of eight civilians, including two elderly women, Peshmerga fighters and a local mayor. Several more were injured
By Kurt Nagl and Hajir Sharifi

ZARGALI VILLAGE, Kurdistan Region – When the first bombs fell, Shirwan Ahmad saved his children. Then, he went back for his parents.

Bleeding from shrapnel wounds, Ahmad raced through the village he had lived in since he was a child. It was now in flames.

He stumbled through mangled metal and crumbled cinderblocks, his heart pounding and ears ringing. He passed his cousin Jutiar Ahmad Khadir, who had Ahmad’s badly injured father thrown over his shoulder.

“My whole family was hurt,” Ahmad said. “[Warplanes] targeted and hit people who were dragging the victims out.”

By the time he reached his parent’s house, it had collapsed on his mother. He and four others had to dig through the rubble to reach her.

“She was doing her morning prayer when the bombs hit,” he said.

This scene of carnage and confusion occurred in Zargali, a remote and usually bucolic Kurdish village that was bombed by Turkey on August 1, killing eight civilians, including a local mayor and two elderly women, and wounding many others.

The targets, according to Turkey’s ministry of defense, were meant to be Kurdistan Workers’ Party (PKK) guerillas, mountain fighters who use the desolate Qandil range as a safe haven to launch attacks inside Turkey.

On the morning of the attack, however, the PKK were nowhere to be seen.

An investigation by rights watchdog Amnesty International concluded that there were no PKK fighters stationed in Zargali at the time. The report also stated there were “no checkpoints, police stations, or fixed military positions in the village of Zargali, confirming accounts from residents who said no PKK fighters were positioned or residing in the villages.”

This offers little consolation to Ahmad and other villagers whose lives have been ruined.

“Our village is deserted now,” he said. “That is not a solution. This is a massacre.”

In between drags of a slim cigarette, Ahmad tries to understand what comes next. After Zargali was devastated, officials and activists arrived to assess the situation, but so far humanitarian aid and accountability have been slow coming.

These days, the trickle of a stream and the occasional buzz of Turkey’s drones are the only sounds in Zargali.

“We don’t know where we should seek justice,” he said. “Everybody has stayed silent. Silence is consent.”

Mohammad Amin suffered serious injuries after a Turkish airstrike destroyed Zargali. He is currently in a hospital in Turkey

Amnesty expressed serious concerns about the lawfulness of the attack and what appear to be blatant human rights violations. Turkey said it was “saddened” by the deaths of civilians in Zargali.

“The recent attacks in Qandil maimed, killed, and displaced residents, destroying homes and terrifying locals in an area where no military targets appeared to be present,” said Lama Fakih, a senior crisis advisor, in the Amnesty International report.

The investigation’s findings include witness accounts of first-responders being targeted and killed. Peshmerga fighters near the area were among those who died.

“The Turkish government has displayed a flagrant disregard for the lives of local residents,” Fakih said.

The Kurdistan Regional Government (KRG) officially condemned the attacks and called on both sides to reach a peace process. It also advised the PKK to remove fighters from Kurdistan to ensure safety of civilians.

“We condemn the bombing, which led to the martyrdom of the citizens of the Kurdish region, and we call on Turkey not to repeat the bombing of civilians,” read a statement from KRG President Masoud Barzani’s office.

Iraq’s Prime Minster Haider al-Abadi said Turkey’s offensive was unacceptable and the country had no permission to attack across its border. Ibrahim al-Jaafari, foreign minister of Iraq, condemned the attacks and Turkey’s campaign of “fear and intimidation” in northern Iraq.

Ankara has continued to claim the airstrikes targeted “many PKK high-ranking leaders and officials,” according to Turkey’s foreign ministry.

“Hearing that many civilians were killed due to airstrikes, we were saddened, and we attempt to avoid civilian casualties in the future air raid operations,” read a statement from the ministry.

The village of Zargali was leveled by Turkish airstrikes. Mangled metal and crumbled bricks are all that is left

Ahmad’s father lies on a bed in the corner of a stuffy, unfinished home a few kilometers from Zargali. A blue-checkered blanket covers his torso, concealing several broken ribs and bandaged wounds. His broken leg is propped-up on the bed’s frame.

Five families live in the house, said Ahmad, explaining a local villager offered it to them for temporary shelter.

Ahmad looks after his father and worries about his sister who suffered severe injuries during the attack and might lose her eyesight. She was transported to a hospital in Turkey.

“I think it’s hilarious: they are bombing us, then treating us,” Ahmad said.

As Ahmad speaks, his cousin, Zaria Ahmad, scrolls through grisly photos taken with a mobile phone right after the attack. He lands on an image of a man with a gaping hole in his face. It’s his uncle, Mohammad Amin, also being treated in Turkey.

“We don’t believe Turkey launched the attacks without consent of the other countries,” said Ahmad, speaking calmly and staring intently with hazel eyes.

Victims of the attack visited with [Masoud] Barzani, said Ahmad, but aside from medical expenses, all they have been given is promises.

“The KRG has little power to stop this,” he said.

PKK fighters maintain a checkpoint a few kilometers away from Zargali. A few flags and pictures of Abdullah Ocalan mark the group’s presence

A few kilometers from Zargali, two PKK fighters stood on the side of the road with Kalashnikovs slung over their shoulders. Their presence, so near to the ravaged village, proves the complexity of the situation in Qandil.

A PKK spokesperson told the Amnesty investigators that “in order to ensure civilian protection, PKK fighters did not mix with the residents and that as a general principle they maintained positions at least 5 kilometers away from them.”

Yet, high above the guerillas, a red PKK flag fluttered atop a mountain. Nearby, there were massive portraits of Abdullah Ocalan, or “Apo,” the iconic founding father of the PKK who has been jailed in Turkey since 1999.

“There are no PKK in the village, but we came and ran to the help of the people,” said Zagros Hiwa, a PKK spokesperson, adding that there was no warning before the attacks.

He said there are hundreds of PKK fighters in the area, but none in Zargali, which was primarily Peshmerga.

The PKK and villagers had a shaky relationship before the attacks, but now tempers have flared. The PKK are unwanted, many villagers said, and their presence puts the area at risk for more airstrikes.

“Our relationship with them is terrible. They are treating people badly,” said one villager, whose name has been withheld for safety reasons.

Another added: “The PKK say they’ve gotten this area with blood, but if they did, it was our sons’ and daughters’ blood.”

For Ahmad, it comes down to keeping his family safe, and the PKK pose a risk.

“For the longest time, we begged PKK to stay away from our villages,” he said. “We respect them. We value what they’re doing. But passing close to our villages is outrageous.”

Hiwa said any relationship the PKK and villagers have is built only on the common ground of being Kurdish.

“We say hello, but we don’t have an organizational relationship,” he said.

Turkey is the reason for all the bloodshed, Hiwa said, and Erdogan’s main goal is to “annihilate” the Kurds.

“We are retaliating by attacking Turkish soldiers within Turkey,” he said. “We have to. We have no other way. No international body has ever criticized Turkey.

“You have to depend on your own resources and strength to defend your people.”

Mohammad Amin, left, suffered serious injuries during the Turkish attack on Zargali. Aishah Ahmad was among the eight civilians who were killed in the attack

Zaria Ahmad continues flipping through pictures taken after the attack, reliving the devastation.

His 4-year-old nephew, Sarkawt – “Victory” in Kurdish – crawls on his lap and cranes his neck to see the screen.

His uncle twists the phone out of the child’s sight. He holds a picture of a badly burned body half-covered by a tattered blanket, surrounded by rubble. The head and legs are charred. The hair is stained with blood.

The almost unrecognizable body is Ahmad’s mother, Aishah. The family pulled her from the ruins of the house only to realize she had died. It was an instant death, her sons hope.

Aishah, 69, was well-loved by the community. She left behind eight sons fighting in the war against the Islamic State.

Her sons in Zargali recalled how their mother would visit every home in the village during Ramadan, just to wish her neighbors well.

“She was very kind, not only to her children, but to all villagers,” said another of her sons, Ahmad Khadir. “She would cry while we were away working. She was so impatient to see us back at the house.”

Her body was buried near the village, along with the others who were killed on Aug 1. Gathering for a proper burial in Zargali would have been too dangerous, the family explained.

Ahmad and the villagers can only wait for justice. They have hope, but are doubtful it will ever come.

“I sent my mother’s prayer rug to Erdogan,” Ahmad said, “to send a message to Turkey.”

Jutiar Ahmad Khadir stares away as he recounts the Turkish attack on Zargali. His mom was buried under rubble and died. She was 69

The Turkish airstrikes on Zargali resulted in eight civilian deaths, including two peshmerga fighters and a local mayor. Many others were injured

The village of Zargali was leveled and reduced to piles of mangled metal and crumbled cinder block after Turkish airstrikes on August 1, 2015