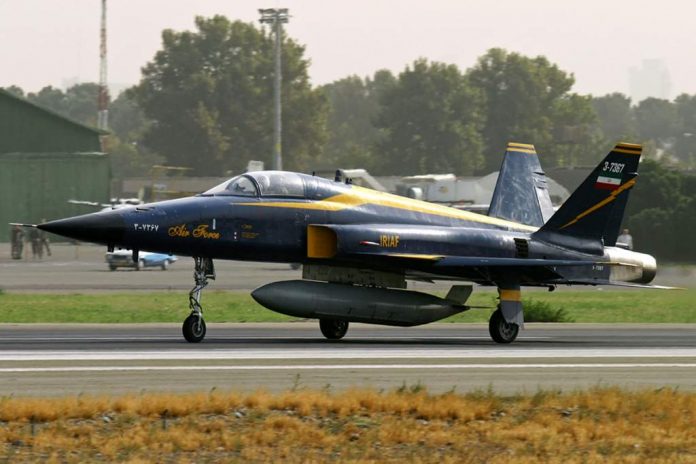 This week, the Iranian FARS news agency reported that the new Saeqeh 2 (Thunderbolt 2) fighter jets have been delivered to the Iranian Air Force. The announcement was made in Tehran by Iranian Defense Minister Brigadier General Hossein Dehqan on Tuesday – the National Defense Industry Day. Dehqan told reporters “Saeqeh 2 fighters have been delivered to the Air Force and a training jet has also been tested and is ready for manufacturing.”

The new fighter jet was unveiled to the public in February this year; Iranian Deputy Defense Minister Brigadier General Amir Hatami said, addressing the unveiling ceremony: “The double-cockpit supersonic fighter jet, which has been designed and built by the defense ministry’s aerospace industries organization in cooperation with the Islamic Republic of Iran’s Air Force, can be used for combat missions, close-range cover and backup in tactical missions, and also advanced pilot training programs.”

Hatami said the aircraft had been built on the basis of a new design which had maximized its combat power, adding that the plane had also been equipped with advanced electro-avionics and weapons systems to train pilots for flying with the existing or new heavy fighters.

Also in February, Iranian Air Force Commander Brigadier General Hassan Shah Safi announced that his forces had focused all their power and energy on building fighter jets as they believed that future wars were fought and won in the sky.

“It is obvious that future wars will be in the sky with massive air and missile raids; therefore, the Air Force has adopted a new approach and focused all its internal power on building fighter jets in a self-driven, but organized way,” Shah Safi said while addressing foreign states’ military attachés in Iran.

He said that the Iranian Air Force’s efforts had resulted in the building of Saeqeh fighter jets but also reiterated the defensive doctrine of the Islamic Republic, saying Tehran had the narrowest military budget among the regional countries.

The Saeqeh is a joint development effort of the Iranian Ministry of Defense and the Iranian Air Force to produce a budget-minded local multirole aircraft platform equipped with modern avionics systems and possessing the qualities and capabilities of contemporaries from other nations.

At least 140 American F-5 Tigers were delivered to the Iranian Air Force in the 1970s with some 60 or so still believed to be operational today. It is therefore logical that Iran reverse-engineered and then further developed an aircraft that it is very familiar with and has given decades of reliable service. The Saeqeh looks a lot like a modernized, modified indigenous version of the American F-5E Tiger II with some aerodynamic changes that appear to draw inspiration from the F-18, such as the dual canted tail fins. Militaryfactory.com gave a description of the aircraft:

“Outwardly, the Saeqeh is of a conventional design and layout, appearing as something of a slight cross-breed consisting of the American-made Northrop F-5 Tiger and the McDonnell Douglas F/A-18 Hornet. It is more in the class of the former however, due to Iranian experience in the operation of the F-5 from decades prior. The cockpit is situated in the forward fuselage which consists of a long nose cone housing a radar system. The cockpit is covered over in a large canopy and only the rear view is covered by the fuselage spine – the rest of the views out of the cockpit are unobstructed. Wings are low-set monoplane assemblies fitted amidships. The fuselage is straddled by a pair of intake ducts that run three-quarters of the fuselage length and aspirate the two engines. Each intake features a smallish rectangular opening at the front and exhausts through a pair of circular rings at the rear. Instead of the F-5 Tiger’s single vertical tail fin, the Saeqeh fields a pair of outward canted vertical fins similar in scope to the F/A-18 Hornet. The undercarriage is of a conventional tricycle design made up of two main legs and a nose leg. The main legs retract inwards towards centerline while the nose leg retracted forward, under and ahead of the cockpit floor. The twin engine arrangement and twin vertical tail fins are the key differentiating features of the Saeqeh when compared to the F-5.”

Due to the lack of available published information, the technical aspects of the Saeqeh are largely unknown. The aircraft will most likely feature a modernized digital cockpit with avionics and armament systems that allow it to compete on the modern battlefield. The armament stable will most likely be largely Russian in origin and include access to the latest in guided-missile and bomb technology. The defensive suite is said to be entirely locally-produced within the Iranian military

complex, negating the need to procure expensive or limited-function systems from foreign parties.

While Iranian authorities compare the Saeqeh favorably to the United States Navy’s F/A-18 Hornet, its true capabilities remain to be seen. The Saeqeh is not a 5th Generation design by any scope and does not incorporate any known stealth technologies as may be found in the American F-22 Raptor and F-35 Lightning II series of jets or the upcoming Russian Sukhoi T-50.

Commentators in the West have been critical of the new Iranian Fighter, a typical comment came from a staff writer at militaryfactory.com, dismissing it as “nothing more than a Iranian take on the American F-5 Tiger.”

Of course, the Saeqeh is not just a copy of the old F-5E, it is an evolution of that design with improved aerodynamics and fully modern electronics systems and avionics. The engines are undoubtedly more modern and powerful than the J85s of the F-5 giving the Saeqeh superior performance to it’s ancestor.

An evolved, improved, more powerful version of the F-5 has been produced before, by Northrop themselves in the form of the F-20 Tigershark which made it’s maiden flight from Edwards Air Force Base, Calif. on Aug. 30, 1982.

In his article “What Might Have Been: F-20 Tigershark – The best fighter never bought?” Robert F. Dorr described the aircraft:

“With a General Electric F404-GE-100 turbofan engine rated at 17,000 pounds of thrust, the F-20A was 40 percent more powerful than the twin-engined F-5E Tiger II that preceded it. Northrop said the F-20A would have a low price tag, operate from short runways, and outfight the Soviet Union’s best.”

Northrop developed the Tigershark as a lower cost alternative to the General Dynamics F-16 which was being introduced into U.S. Air Force service at that time. The Carter administration had initiated a Department of Defense (DOD) project called “FX” to sell less-advanced fighter designs to U.S. allies in order to limit the possibility of front-line U.S. technology falling into Soviet hands. Northrop anticipated foreign sales of the Tigershark under the FX programme, particularly to countries like Taiwan that already operated F-5s.

“Northrop believed its product was superior to the General Dynamics F-16A Fighting Falcon. Both began as no-frills lightweight fighters and gradually became heavier and more complex. The F-20A was a better point-defense interceptor, but for most missions the two were comparable. And the F-20 was less expensive.”

With the election of Ronald Reagan as president, the FX programme fell by the wayside as the administration relaxed export restrictions. Then the 1982 signing of the U.S.-China Joint Communiqué on arms sales blocked sale of the F-20 to Taiwan. Worse for the F-20’s chance in other markets, the Air Force had an iron in the fire with regard to foreign military sales as every F-16 sold to a foreign country meant the overall production cost of the Air Force’s own F-16s would go down.

The final nail in the F-20As coffin was hammered home by the crashes in Korea and Canada of two of the three prototypes. In both instances, G-loc (unconsciousness induced by high G forces) was found to be the cause. – The F-20A was so manoeuvrable it could easily perform turns that induced more G than the pilots could withstand.

Robert F Dorr provided a neat summary of the F-20:

So the F-20, an evolved F-5 was at least a match for the F-16. Two decades later, the F-16, albeit in evolved form, is still the backbone of the US Air Force and many NATO air forces too; Israel has over 300 F-16s of various variants. The Iranian Saeqeh is an evolved F-5 with modern systems and capabilities. Therefore, it is reasonable to assume that the Saeqeh represents a serious opponent to the current F-16 models just as the F-20 was to the original F-16, despite the dismissive attitude of Western writers.

Let us all hope that the F-16 and Saeqeh never get the opportunity to prove themselves against each other in a conflict.