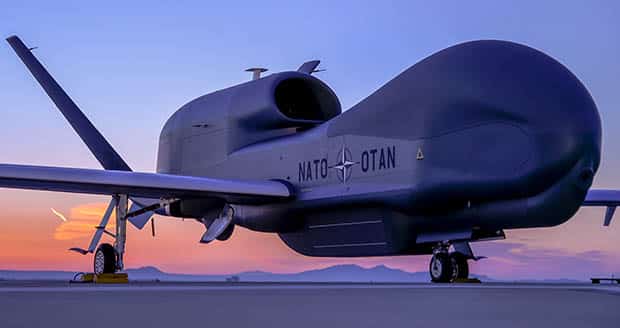 [ Editor’s Note:  Only by reading both sources can you uncover the lies and spinning you are getting from military media people who can be ordered to spin the news, treating the public like potential adversaries in terms of not wanting them to know what really is going in threat analysis.

Endless NATO press statements have been released on Ukraine that were largely fictional, done as cover for building public support for planned and desired military expansion toward Russia’s western border. Moscow’s necessary reaction to this is spun as aggression on its part, when that shoe is actually on NATO’s foot.

I thought this was an excellent piece to show how easily Russian media can shred the NATO fairy tales using public-sourced material, and giving the spies and Intel people the weekend off.

The so-called Democratic publics are the ones being short-changed in all this, with their democracies under attack by a constant flow of lies and disinformation. The Vet orgs have never said a peep about any of this, but rubber-stamp whatever passes in front of them.

All of those involved in these charades feel they are beyond criticism, and that has to change, if we are not to be treated as plantation animals, being fed whatever the Masa chooses to feed us… Jim W. Dean ]

The military activities of aircraft of NATO member states near Russian aerospace is a far cry from the pace of operations of Russian long-range aircraft. The conclusion has been drawn in the Russia-NATO: Facts and Myths analytical review released by Russia’s permanent mission to NATO.

“NATO leadership’s statements about more proactive Russian Air Force operations in the Baltic area and over the Black Sea is an example of fact spinning,” the permanent mission states in its review. “Russia had to respond to the military buildup and increasing activities of the alliance’s member countries near our border.”

The hype about civilian air traffic “risks’’ stemming from Russian military planes flying near NATO borders “with their transponders off”, which the West is fanning in earnest, is another ruse on the part of the alliance.

“Russian planes fly in full compliance with the rules governing international air traffic, i.e. over international waters without entering the airspace and violating the border of other states,” the mission stressed. “This can be proven using flight recorder data on a case-by-case basis.”

“The West is hyping up the so-called violations of the [international air traffic] rules by the Russian Air Force to distract the international community from the buildup of NATO’s air power in the vicinity of our borders,” the publication carries on. “It is NATO that resorted to a substantial – fourfold – increase in the number of their air patrols in the Baltic States, with the patrols flown very close to Russia’s border.”

US Air Force (USAF) RC-135 strategic reconnaissance aircraft fly virtually on a daily basis. Lately, NATO reconnaissance planes have flown over the Black Sea twice as more often as they did in 2013. In addition, USAF Global Hawk strategic surveillance unmanned aerial vehicles have been flying in the area regularly since January 2015. In March 2015, they appeared in Ukrainian airspace as well.

The alliance is active in using its E-3A AWACS aircraft for monitoring the airspace in the western part of the Black Sea over Ukraine and Russia’s western regions. The overall number of their missions in the area increased by over 20 times in 2014, while the total number of sorties flown by NATO tactical aircraft in the areas adjacent to Russia and Belarus doubled, exceeding 3,000 sorties.

“Thus, the facts point to an unprecedented increase in NATO aircraft flights near the Russian border,” the review emphases. “These steps are accompanied by provocative calls by NATO leaders for ‘containment’ of Russia and by an aggressive propaganda campaign unleashed recently against the backdrop of the developments in Ukraine. Obviously, this does not facilitate a reduction in the tensions that are running high.”.