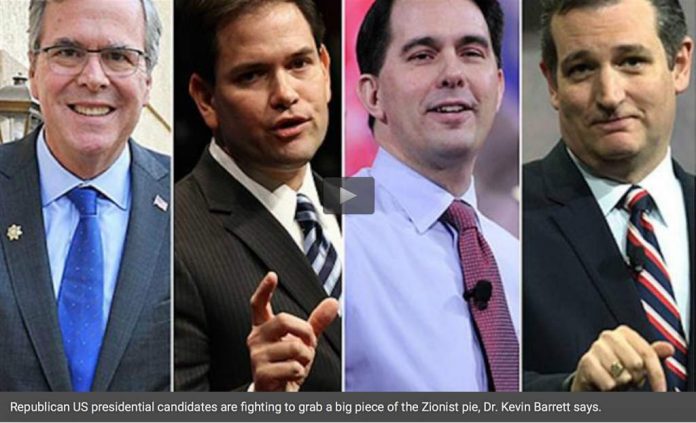 As Republican US presidential candidates speak against the Iran nuclear agreement, an American scholar and journalist says what they are actually doing is obediently groveling to get a big piece of the Zionist pie.

Dr. Kevin Barrett, a founding member of the Muslim-Jewish-Christian Alliance and a host of Truth Jihad Radio, made the remarks in a phone interview with Press TV on Thursday while commenting on a statement by Republican Senator Marco Rubio.

Rubio told Fox News on Wednesday that if he becomes the US president, he will strike down the Iran nuclear agreement and reimpose sanctions against the Islamic Republic on his first day in the White House.

The Republican White House contender said the nuclear accord with Iran can be undone by the next US president. “This is not a treaty, there’s nothing about this that’s binding on the next administration.”

“There is a zero chance that Marco Rubio is going to be the next US president, so his threat to torpedo the Iran deal on his first day in office is not a very serious prediction of anything that is likely to happen,” Barrett said.

“But it is kind of amusing. It shows how the Republican race has become a kind of circus, and one of the side shows is this rush to the bottom as they all try to grovel even more obsequiously than the others for Zionist money,” he added.

“Sheldon Adelson has apparently regretted that he only gave $100 million of his mafia money to the Republicans in the last presidential race. That couldn’t succeed in getting Mitt Romney – an organized crime figure – elected. So he is apparently going to pour even more money into the race this time,” he stated.

“And each of these clowns in the Republican Party – and they’re all clowns with a very few exceptions – actually Donald Trump is even a little bit less of a clown than the others, Rand Paul is the only one with the slightest shred of integrity and even Rand is saying things that would bring him money – but these people like Rubio, they have completely lost their dignity,” the political commentator noted.

“And they are essentially trying to get a piece of that, God knows if there’s going to be a billion dollars this time from Mr. Adelson as well as other big-time Zionist crime family people,” he continued.

The September 11 attacks, also known as the 9/11 attacks, were a series of strikes in the US which killed nearly 3,000 people and caused about $10 billion worth of property and infrastructure damage.

US officials assert that the attacks were carried out by al-Qaeda terrorists but many experts have raised questions about the official account, saying it was a false-flag operation and that Osama bin Laden was just a bogeyman for the US military-industrial complex.

Dr. Barrett stated that the hard-line Zionists, the Likudniks, the neoconservatives, the extremists “pulled off 9/11 precisely to take out seven countries in five years as was revealed by General Wesley Clark, and Iran was the seventh [on that list] and the most important.”

“And blowback from patriotic American military people and the realist party led by people like Brzezinski and General Martin Dempsey have prevented them from getting their war on Iran. And it’s not going to happen now, it’s too late, the entire world community has gotten behind this Iran deal,” he observed.

“But being petulant and egocentric like two-year old babies, these neoconservative Zionist extremists are still yelling and screaming and crying,” he said.

“And the rich ones, like Adelson and his friends, have so much money.  [The Republicans] are more interested in getting money than actually becoming president. So I think that’s the way we have to interpret this. It is really all about grabbing a big piece of that pie that’s out there and available,” the analyst said.

“Now, on the off chance that any of these clowns, who are promising to scuttle the Iran deal actually did become president, I suspect that we would have a crisis in the halls of power in the United States,” he predicted.

“And the real power, of course, here in the United States is not purely exercised by elective representatives. There is a deep state, there are shadow governments, there are eminences grises behind the scenes,” the scholar said.

“And I think there will be a very serious discussion with someone like Rubio, if somehow such a person actually got elected president, but I am quite sure that won’t happen in the case of Rubio. So we’ll see how it all plays out,” he stated.

“But here we in the United States of America living in the shadow of the 9/11 big lie, we are cursed to live in interesting times,” Dr. Barrett concluded.