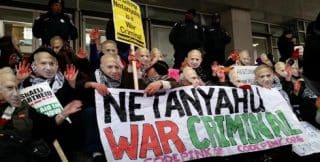 The British Parliament has come under increasing fire over its decision to skip a debate on a petition calling for the arrest of Israeli Prime Minister Benjamin Netanyahu.

“It’s quite disappointing that the Parliament has refused to play by its own rules. The fact is that it’s a particular issue which receives over 100,000 signatures that ultimately allows to be debated on the floor of the House. The fact that it has been declined, gives rise to many questions,” said Anas al-Tikriti, chief executive of the Cordoba Foundation.

Al-Tikriti described the petition as an important bid, which shows the British people want an end to their government’s support for the Israeli regime.

Earlier this week, the British parliament announced that it will not debate the petition calling for the arrest of Israeli Prime Minister Benjamin Netanyahu over war crimes.

The petition has already received over 112,000 signatures, well above 100,000 signatures necessary to qualify the motion for a debate in parliament.