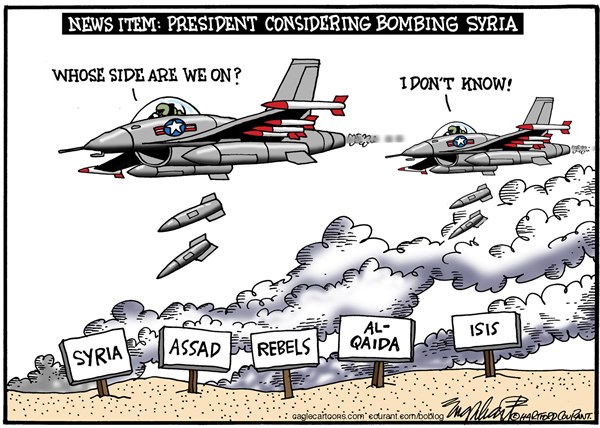 [ Editor’s Note:  This article was written during the Syria trip that we just got back from last weekend. Although we will not be able to write about most of our discussions other than with the Grand Mufti, the refugee situation, the war and the continued backing of ISIS by many Western players were all major concerns.

A game changer approach is needed to get out of the phony War on Terror paradigm that we are all trapped in now, running around in circles and getting nowhere, as that was someone’s objective.

Gordon has gone back in history, further than the Bush (43) doctrine that “we will hunt down and get all those supporting terrorism wherever they are”, back to the Vietnam war where he was blooded… Jim W. Dean ]

With recent talk of mysterious Russian forces inside Syria, forces no one has been able to locate, including Syrian President Assad, wondrous possibilities open to redress the both regional and global threat that ISIS represents.

It isn’t just the ISIS safe havens, certainly the many ISIS bases, prison camps and slave markets set up inside Turkey. It goes much further and a stronger military involvement by Russia could make lightning strikes against these terror centers a reality.

The legal precedents were set during Vietnam and, particularly, during the War on Terror, rendition, secret prisons, assassinations and drone attacks on facilities, now a useful tool when deployed against terror supporters across the Middle East, Europe and North America.

Only when we decide to get tough on real terrorists and use the legal tools the United States government has granted the world, can we finally be safe, just as Dick Cheney had wanted for us all.

Last week Syrian artillery began decimating hundreds of ISIS fighters fleeing their last hiding places in Zabadani, scene of a month long battle with Syrian and Hezbollah forces, one of a string of successes in reducing the dwindling ISIS footprint in that beleaguered nation.

This has happened many times and been reported many times, never with any attempt at denial.

Back in 1970, a famous American military strategist and political advisor named Henry Kissinger was faced with a similar situation. American forces inside South Vietnam were being attacked from strongholds inside the neighboring nation of Cambodia.

First, Kissinger sent in B52’s to carpet-bomb the region. Then Kissinger announced a US invasion of Cambodia, May 1970, with tens of thousands of American troops entering that country legally, by American standards, going after the militant forces that now constitute the legal government of a reunited Vietnam.

Daraa Province in Southern Syria has been plagued with forces trained inside Jordan at CIA camps entering Syria and butchering thousands of civilians. These forces leaving Jordan fly the black flag of ISIS. Managing their operations is a command center outside of Amman, Jordan, staffed with US, Jordanian, Israeli and Saudi officers.

The large logistical facility that handles both trucked and air dropped supplies for ISIS in both Syria and Iraq is staffed by members of MEK, a pseudo-Islamic cult established during the 1960s in Iran by the Mossad, the same group responsible for fighting alongside Saddam against Iran and gassing 30,000 Kurds to death between 1991 and 1993.

From October 2014 onward, an endless stream of top of the line TOW missiles has been shipped by Raytheon Corporation to US Army supply depots. There is no record of end user certificates transferring these to any other nation.

These missiles ended up at a US Air Force Base in Constanta, Romania. From there, they were flown to Tbilisi, Georgia and from there trucked by British Petroleum and Bechtel Corporation through Turkey and into Syria where they were turned over to al Nusra/al Qaeda forces.

More high tech weaponry paid for by the American taxpayer was flown into a US Air Force Base in Adana, Turkey. From there it was trucked to an ISIS/al Nusra logistics facility run by the Turkish Army in the town of Rehanli, Hatay, Turkey, only miles from ISIS bases inside the Syrian city of Aleppo.

When tracking down the TOW missiles, it was found they had been consigned to the CIA as secret supplies to the Kiev junta.

Evidence is accumulating that Kiev is actively supplying ISIS with weapons and, more interestingly, actively advising and assisting with chemical warfare against the Kurds, in exchange for promises from Turkey which may include a Ukrainian gas hookup to the new Turkish/Russian southern route through Romania.

Online maps showing this spur have been purged from search engines and wrapped in malware.

Going further afield in order to find terror supporters who can, according to US law, be subject to drone strikes, we can begin to finally, years later, start degrading the material supporters of ISIS, not just Senator John McCain but others as well.

We know ISIS gets considerable funding from selling stolen oil. We also know who is running this for them; British Petroleum and Exxon Corporation.

These terror supporters are vulnerable, they have tanker fleets that can be seized and assets around the world. Were Exxon headquarters in Irving, Texas or several of their terrorist operational centers north of Houston at the Woodlands to be hit by the Delta Force aided by Russian Spetznaz, it would be the first real step in a very real war on global terror. Is America ready for that?

Remember, it is American law that makes everyone involved in supporting terrorism subject to non-judicial killing.

Let’s not forget the theft of Syrian and Iraqi antiquities. Interpol has carefully traced thousands of items worth hundreds of millions of dollars into auction houses in London, New York, Vienna, Paris and Berlin.

Nearly every major auction house has some terrorist items with some well-known houses taking major positions in terrorist finance.

America has to be given credit for using some of the greatest legal minds the world has seen, bringing them together, all members of the noted Federalist Society, and putting together the laws that will bring ISIS to its knees.

That America, though poor judgement, kidnapped and assassinated almost entirely innocent people under these provisions is unfortunate. Perhaps others will do better.