Home Government US for unchanged status quo in Syria 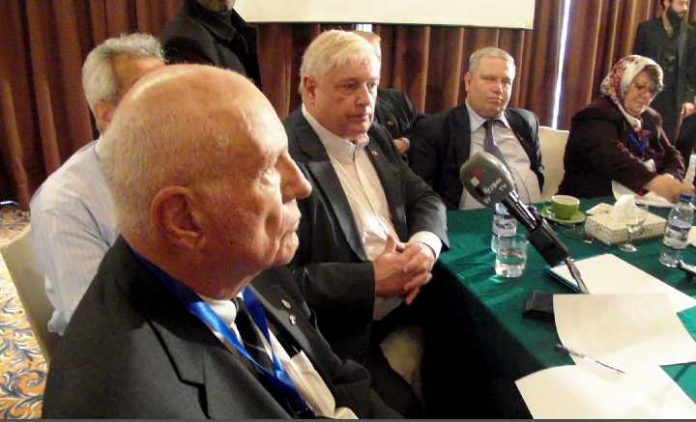 [ Editor’s Note: Nahed did a great job of juggling so much of the coordination for this trip. She met us in Beirut, making sure we ate at least one good meal there before we made the border run over the mountains to Damascus, a harrowing experience in itself, as there seem to be no traffic laws whatsoever. Gordon will have some videos.

Having good interpreters for meetings is absolutely critical when handling complex discussions. A lot of proper names are being used frequently — companies, military equipment, names of people, etc. — that may be unfamiliar to an interpreter. The Syrians would often have two or more of their own, and at times they would powwow quickly to agree on the best wording to convey the meaning intended.

One of the main topics was of course the massive media disinformation about the Syrian war. While doing a Press TV Debate show earlier this week, I had a fellow guest, an Asian expert, actually claim Assad only controlled 15% of Syria. He should have done his homework better. Even the Israelis only claim that Assad controls 35%.

The game being played here is a lot of the country in the west is desert, and the Syrian Army was not so stupid as to spread itself out, when defending the population centers was more critical. But the lies told about America’s bankrupt foreign policy in Syria are now out in the open. The lie machine does not work anymore. Barrel bombs in Syria will go the way of the nanothermite ruse on 9-11.

You will be hearing more from the Syrian side of the conflict on VT, as we wind up what has been a busy 2015. The terrorists have been aided and abetted via a well-financed and coordinated media campaign, which itself comes under “providing material support” to terrorism, which by the way is a serious felony.

Most all of those involved think they are untouchable, but as this war winds down, which they all eventually do, there will be a huge rebuilding tab to be paid by someone. I would be willing to bet that the Intel files are going to flood the world with all the proof that could be asked for, as to whose fingerprints are on graves of the dead and the destruction of the towns and cities.

The world will be faced with a big challenge to enforce laws already on the books as to financial liability, in such cases. Collecting would be another matter, as those with large standing militaries can use them as human shields to protect themselves.

But those guilty are betting that their militaries are going to continue to allow themselves to be abused like they have in the past, fighting for special interests under the guise of their country. People are wising up to that scam… Jim W. Dean ]

“The United States wants the status quo to remain the same in Syria, so the war goes on and neither the government nor the militants prevail.” This is the warning from the Syrian Minister of Justice Dr Najim Hamad Al Ahmad.

Dr Al Ahmed cautioned Western powers that still think that they can exploit terrorism for their own selfish ends that “the US and Europe will not be safe from the terrorist groups, especially when their many foreign fighters return home.

“Certainly, they will not go back and plant Jasmine in their countries of origins,” the minister said. On the plight of Syrian Refugees, Dr. Al Ahmed noted that “this issue is employed by the West as an umbrella for achieving political purposes.”

The Minister confirmed that his country is open to any political overtures, but determined more than ever to combat terrorism in all shapes, citing the courage of the Syrian army in fighting this current war, just as in past regional conflicts, including the struggle for justice in Palestine.

In the same context, the Secretary-General of the European Department for Security and Information, Dr Haissam Bou Said, underscores that “private US intelligence units from the CIA and Mossad set up the so-called ‘moderate militants’, using funding and logistic support provided by Saudi Arabia, Qatar and Turkey.”

The United States has lost control of the ‘Militants’

“The United States has lost control of the ‘Militants’ and its policies are now being made up on the hoof,” Bou Said said, cautioning that the “situation in Syria requires tremendous acumen and precision vis-à-vis security and political issues, especially those pertaining to arming the US-backed moderate militants in Syria.

This is not just destabilizing Syria, but other countries in the region, and additionally threatens Europe in particular with the problem of ‘blowback’.”

Dr Bou Said added “we are at the threshold of new Sykes-Picot in the Middle East, that bears different names, where Russia and the United States become the key players in the region, and the new map of the Region will be implemented if and when the International Forum reaches a comprehensive political settlement after defeating the extremist groups that are the main blocking hurdle in the international project.

The election of the UK’s new Labour Party Leader (above) has enormous potential significance beyond Britain. The outspoken and charming leader has rallied support among his party members and now has the potential to harness British public concern about UK foreign policy as a major plank of his campaign for the country’s next General Election.

Jeremy Corbyn’s very honest assessments of the situation in the Middle East, his long-established opposition to Zionist aggression, and his more recent statements about the role of MI6 and the CIA, have all earned him the relentless hostility of Britain’s corporate media.

He must know that, whatever he now does, he will win no friends there, but his warnings on the dangers to Britain if the Conservative government continues to play with fire, and his call for Britain to try to take the road of peaceful negotiations rather than once again using expensive war jet ‘diplomacy’, will surely strike a chord with millions of people in Britain facing brutal austerity cuts.

Can the passionate speeches made by Corbyn made a difference? Yes, they can. The public wants to hear a distinctive voice spelling out the truth. Corbyn’s authenticity and courage are the points he must trade on to build support for his real Labour Party among the British public as a whole.

With the Syrian crisis and its consequences grabbing the headlines day after day, an intelligent and principled involvement with the effort of Russian President Vladimir Putin to form a genuine coalition against terrorism, could see Corbyn outflank the Conservative government’s knee-jerk plan to “bomb Syria in order to save it”.

For such a coalition to work, it is of course necessary for the Syrian body politic to include wide effective political opposition and choice. Corbyn’s long record on the Middle East and his strong stand for human rights give him unique status in the region as an ‘honest broker’. As such there is an opportunity for him to play an important role in the peace-building process which is so urgently needed both for the Syrian people and the wider world.