Home World What will Obama and Putin talk about? 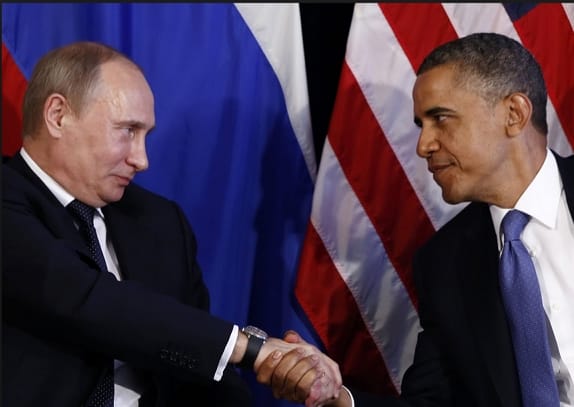 In this final week before Vladimir Putin addresses the UN General Assembly, there has been a flurry of contact between Washington and Moscow. And by that I don’t just mean the Sept. 18 telephone call between the defense ministers of Russia and the US.

Russia’s beefed up military presence in Syria has clearly sparked a whole series of informal consultations, the culmination of which should be a meeting between the leaders of Russia and the United States on the sidelines of the General Assembly.

The key topics during their talks will undoubtedly be the refugee crisis and the fight against the Islamic State, the latter having about as much to do with Islam as ‘Russian dressing’ has to do with Russia.

There is no question that it is the US and her NATO allies who must provide the refugees from Syria and other destabilized regions with political and economic refuge within the borders of those Western nations – even if their numbers grow to tens of millions. That means providing them with what they need to survive, including a roof over their heads, appropriate health care, and any other assistance they may need.

But meanwhile there is also the issue of the approximately one million people who are fleeing the wars and armed conflicts that have erupted as a result of various “color revolutions” that have been staged and sponsored by Washington and many other Western capitals.

As soon as this group of countries stops supporting and expediting terrorism in the Middle East and Africa, the wave of “war” refugees converging on Europe will immediately subside.

The United States and her NATO allies should spend less money on large-scale military training, introducing surplus nuclear and conventional weapons throughout Europe and other regions of the world, and deploying a global missile-defense system, as well as supporting Kiev’s undeclared but ongoing war – which includes the use of heavy weapons – against its own citizens in the Donbass.

The large sums of money that could be saved by following this advice could be used to provide shelter for refugees from the Middle East and North Africa within the borders of those states that are both EU and NATO members.

The US has announced her readiness to raise her own refugee quota to 100,000 in 2017, which seems unachievable. Throughout the many years of the Syrian conflict, the United States has only taken in about 1,500-2,000 refugees, which is approximately how many arrive each day on the Greek island of Lesbos.

In 2014, 105 of these “lucky ones” made it to the US. Washington also takes far too long to make a decision about whether to grant or deny refugee petitions for asylum – from 18 to 24 months. But one must keep in mind that nearly 12 million people have already fled Syria, and this torrent continues unabated.

[ Editor’s Note: This 12 million figure is incorrect. This is the number of all “displaced Syrians and Palestinians”. Many of the Palestinians are in the bursting Lebanon camps which are hell in bad weather. And most of the Syrians are inside Syria under rough conditions, also…Jim W. Dean ]

Importantly, the US budgetary spendings for asylum seekers are constantly decreasing (e.g. down to $2,45 billion in fiscal year 2015 from $3,05 billion in 2014) and there is no indication the federal government would ever comply with its commitment to receive extra refugees from the Middle East. Russia was the first country to organize a large-scale evacuation – without considering the nationality of the displaced – from war-torn Syria and Yemen, at times even putting the lives of Russian flight crews at risk. According to immigration officials in Moscow, approximately 12,000 Syrian refugees have found a haven in Russia.

In addition, Russia has taken in over a million Ukrainian citizens who have fled the genocide and civil war that have been unleashed by the new regime in Kiev. Furthermore, Russia has not asked anyone to provide outside assistance with these tasks and is dealing with that problem on her own.

The “coalition” vs. ISIS?

There are many reasons to question whether the US would prove a reliable partner in a viable, effective, anti-terror coalition. The fact is that Washington itself created this terrorist pseudo-caliphate, actively arming and generously funding it and sending its “fighters” to do battle against the elected Syrian president, Bashar al-Assad.

In addition, the White House has openly advocated for the armed overthrow of the current Syrian regime, and has never renounced that goal. It would be interesting to know how the current US administration intends to both utilize jihadists to depose the Syrian president while also battling against them.

Washington’s “contribution” to this matter has been laughable: at first, the Pentagon planned to train 75 fighters to battle IS, and then reduced its proposal to 60, eventually managing to instruct no more than five, which was recently acknowledged at a US Congressional hearing.

On Sept. 16, General Lloyd Austin admitted to the Senate that a special military program with a budget of $500 million to train more than 5,000 Syrian fighters has ended up with only “four or five” combatants who are actively battling IS. The chairman of the Senate Armed Services Committee, John McCain, called the program “an abject failure” and also pinned the blame on the Pentagon for the refugee crisis that has erupted in Europe.

The frenzy of activity on the part of Washington and the members of NATO, criticizing Russia for fulfilling her military and technical contracts with Syria, has also attracted notice.

Furthermore, one must take into account Russia’s previous negative experiences with the US and Great Britain on the anti-terror front. Russia has discovered that her Western counterparts in the quest to fight terrorism have not been nearly as willing as she is to fully share “sensitive” information, often providing Moscow with only outdated information about terrorist activity and under various pretexts reducing the number of meetings between counter-terrorism experts, even (as was the case with Great Britain) completely severing those contacts.

One gets the impression that the primary, secret purpose of Washington’s interest in talking to Moscow about ways to resolve the Syrian conflict is actually to block any expansion of the military-technical cooperation between Russia and Syria, thus depriving Russia of some of her best leverage in her efforts to defeat ISIS.