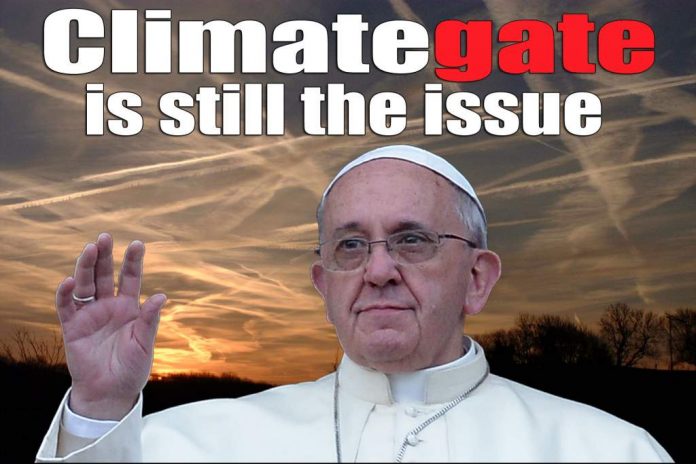 The Laudato Si’ (PDF): It’s more than a disgrace that the Vatican would censor alternative climate perspectives by highly respected scientists from inclusion in the Pope’s “Laudato Si’.   Instead, only the most radical ideologues from the extreme corners of the carbon debate were allowed to advise the Pope.  Reading the “Laudato Si” could give the uneducated a false impression that the Pope is a qualified climatologist speaking in the first person from his own career of research and published work. (more)

Although the “Laudato” could be seen as adulterated with cherry-picked assertions on climate change, neither the speech to Congress or to the United Nations contained explicit reference to “climate change” or “global warming”. Instead, both speeches more appropriately focused on man-made environmental damage, loss of species, damage to forests, destruction of war, nuclear weapons and reckless harvesting of natural resources as the dominant theme. Pope’s Congressional Transcript (PDF) — UN Transcript (PDF)

“The Climategate Inquiries” is a detailed assessment of the Climategate inquiries set up by the University of East Anglia and others which finds that they avoided key questions and failed to probe some of the most serious allegations. The Climategate Inquiries, written by Andrew Montford and with a foreword by Lord (Andrew) Turnbull, finds that the inquiries into the conduct and integrity of scientists at the Climatic Research Unit of the University of East Anglia were rushed and seriously inadequate. (Report – PDF)

The term “global warming” was abandoned  and replaced with “climate change” for at least two reasons:

(1)  Persistently low solar activity warned of a new mini ice-age (Maunder minimum) that could soon begin to noticeably cool the climate, however unevenly.  The rising CO2 levels released from oceans as a normal consequence of the current post-glacial rebound became awkward to explain when temperatures failed to rise, but now we know why.

The Myth of 97% Scientific Consensus: The media propaganda alleging a 97% consensus that climate change is man-made comes from a handful of surveys and abstract-counting manipulations now debunked by more reliable research. Andrew Montford (PDF)

“Climategate is still the issue”

In 2014, Dr. Tim Ball released:  “The Deliberate Corruption of Climate Science”, an astonishing book detailing the massive fraud where climate authors indulged in the incestuous practice of “peer reviewing” each others’ papers in order to make the best case for the IPCC’s repeatedly failed climate models.

James Corbett easily debunks the myth that climate denial is a well-funded conspiracy when $Trillions in profit are revealed to be in the global industry of “climate change” – a term with no meaningful definition such that climate can be usefully distinguished from the more ordinary term, ” weather “.

“The global warming industry has generated over $140 billion in government grants, a $315 billion carbon market and is expected to generate 10s of trillions more in government-sponsored investment in the coming decades.”

Controlling the Weather Yields $BIllions in Profit for Rothschilds

How the Media Reports Fake Weather as “Climate Change”

In March, 2015, Davidson posted a video outlining what he regards as the top 6 problems with the flawed IPCC version of Climate Change.

Many of Ben’s observations look outside planet earth to explain how the sun, galactic forces and observed changes within our own solar system exert influences on the earth and other planets revolving around our sun.

GEOENGINEERING:  In Problem #6 Ben discusses the covert geoengineering operation that is “messing with the weather”.  Geoengineering is widely known to exist by the global population but rarely acknowledged by IPCC investigators, corporate media, government agencies or elected officials.

Occasionally, a climate expert, not subscribed to the cult network of climate corruption, may comment openly on the aerosol climate engineering operation until they are threatened to keep quiet.  In the video below, Dr. Jasper Kirkby, presents the evidence for climate engineering and forced drought to an audience at CERN:

Failure for IPCC workgroups to acknowledge this aerosol deployment is the smoking gun that these geoengineering eco-weapons combined with electromagnetic transmitters and ionospheric heaters, are creating the weather disruption being sold to the public as man-made climate change.

The following video was captured by an astronomer to reveal the release of chemicals from several jet aircraft. Although the evidence for chemical aerosol releases is confirmed beyond a reasonable doubt, there is no evidence that these aircraft were actually carrying passengers.

Above: This curious Vatican commemorative coin was minted in 1985 under Pope John Paul II.  The artistic detail of jet aircraft releasing persistent contrail emissions over the north pole is seen as a “revelation” that a covert agenda to warm the arctic has been underway for years.  Climatologists have known for decades that cloud cover from persistent jet contrails and thin high clouds tend to warm earth’s surface.

President Kennedy’s 1961 address to the United Nations predicted today’s capability of “weather control” and arrays of global satellites. (More)  Kennedy’s weather control prediction was followed by NASA’s creation of a National Weather Modification program in 1966 that was soon hijacked by the military into a secret climate weapons project. (Continue)

Below: Kennedy Predicts Future of Weather Control in 1961