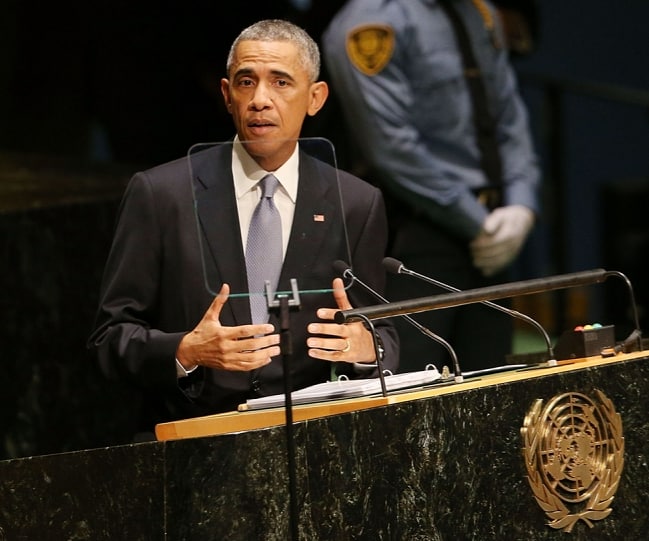 Obama walked into the UN thinking it was 2011, the year America opened its coffers and bought itself a civil war in Syria, paying off military leaders, booking al Qaeda terrorists and manufacturing an axis of evil that spread from Ukraine to Northern Nigeria and the maniacs of Boko Haram.

Obama hit a low note attacking Syria’s President Assad using the tired and ultra-fictional branded lie, the “barrel bomb.”  Were it not for Obama being burned back in 2013 when he planned to carpet bomb Damascus over phony claims of Sarin gas use, a repeat of the Bush era lies that pushed America into two losing wars that killed nearly 3 million so far, he would have tried to push that fairy tale to the UN also.

Putin to Obama:  “Do you realize what you have done?”

Mind you, Cameron and Merkel have abandoned Obama’s position on Syria and joined Putin as have so many other nations, the count is difficult to keep straight.

Putin to Netanyahu:  “We are deeply concerned about Israeli airstrikes against Syria”

Obama’s mistake is that he has lived with fantasy for so long, surrounded himself with weak people, has allowed intelligence agencies still controlled by Bush holdovers to lie to him daily.  Obama has been flying totally blind since taking office, with no understanding of intelligence, of the corruption he inherited and too gutless to clean out the 16 agencies that helped manufacture the War on Terror, turning America into the global advocate of kidnapping, torture and assassination.

Let’s get a few points out early on.  Obama came to New York with dirty hands.  It isn’t just the resignation of General Allen and the $500 million dollar farce that has, thus far, turned American trainees into al Qaeda cadres with first line American weapons being publicly turned over to terrorists at war with the United States.  Though this was done on television, Obama and Kerry have chosen to ignore their failure and are, of course, doomed to continue arming terrorists who will eventually use the weapons the US gave them against American targets including commercial airliners.

Yes, the US has given al Qaeda dozens of newer Stinger missiles capable of ranges above 15,000 feet, capable of downing airliners under the right circumstances.

Obama had been warned by everyone that there was no moderate opposition and that attempting to recruit Syrian fighters to be trained in Turkey in bases shared by al Nusra/al Qaeda cadres was going to blow up in his face.  Obama’s bluster about the “tyrant” Assad just isn’t going to gain anything.

This again is Obama advisors who read Huffington Post and Bloomberg and think they are dealing with high level analysis done by failed chatroom bloggers.

Last month, VT caught the Pentagon peddling a number of absolute hoaxes through its “Earlybird” news service.  Totally false articles were planted by unfriendly foreign intelligence services specifically to be channeled into Pentagon information circles by highly paid contracting firms that use taxpayer dollars to misinform and propagandize America’s military.

Another point is the “ratline” of advanced weapons going to ISIS and al Nusra, sworn enemies of the US.  The most dangerous weapons are the TOW and Stinger missiles that are being used against the Syrian army and the Kurdish allies of the United States.  Additionally, these same American weapons are used in Iraq, in particular against the Iraqi army in the fall of Ramadi earlier this year.

The missiles going to ISIS and al Nusra are airlifted from the United States to the American airbase in Constanta, Romania. The missiles, both TOW and Stinger, are part of a CIA program to arm the Kiev junta against a possible Russian confrontation.  Congress had blocked the use of these weapons by Ukraine but the CIA had “dark funded” and “greenlighted” the program.  Problem is, the weapons were sold to ISIS and company by Ukraine and openly transshipped by American aircraft to Tbilisi, Georgia from which they were trucked into Turkey and later to terrorists in Syria.

VT personnel on the ground tracked the entire transaction, observing the loaded trucks, owned by British Petroleum and Bechtel Corporation, driven inside Georgia by Turkish intelligence personnel.  We saw the trucks, talked to the drivers and observed the crated cargos heading into Turkey.

This is quite different than “accidentally” spending hundreds of millions for the public humiliations dealt America through the defections of its “moderate rebel” trainees.

This is the US sending advanced weapons to ISIS and company to attack the Kurds, the Iraqi Army and Syria.

Let’s find another huge Obama gaff.  Back in May 2015, America supposedly sent the Delta Force into Syria, to Der Ezzor, to capture the ISIS oil baron.  First of all, anyone who wanted to stop ISIS oil revenue only needs to look to Spring, Texas where Exxon Corporation is located.  Exxon and British Petroleum have purchased over 80% of the stolen oil from Syria with the rest going to small refineries inside Turkey.

The May 2015 attack was supposed to signal a new American program of “lightning strikes” inside Syria, mean to cripple ISIS capabilities.  Problem is this was the only attack, there were no more attacks, there was no program of “lighting strikes.”  Our intelligence, based on documents seized by Syrian Spetznaz indicated that the US sent in the Delta Force when America found out that a retired US Army General, commanding ISIS forces in both Iraq and Syria, had been located and was facing capture by Damascus led forces.

Let’s take a second here to look at one of the biggest stories in the Middle East today, one totally boycotted and censored by the western press.  This isn’t just a “blogger/conspiracy theorist” issue.  It starts with documents recovered by the Syrians when the Delta Force blocked their attempt to capture the American commanding ISIS operations from Palmyra to Baghdad.

The documents recovered included emails from an Israeli command center asking ISIS forces in Palmyra to look for the “2nd Temple of Solomon” and to blow it up.  That temple, supposedly built by superhumans, perhaps aliens or even angels, is said to be tied to the first temple in Jerusalem.  The stories filling the press in the Middle East and even discussed by national leaders, stories verified in these captured documents, says that once the temple in Tadmoor or “Palmyra” is destroyed, Israel will mount an offensive on the al Aqsa mosque in Jerusalem.

VT published this in May and, as the world well knows, several temples in Palmyra have been destroyed and Israel has begun the attacks on the al Aqsa mosque.  The hypothesis is the American general, a religious extremist tied to Fox News, agreed to serve on the ground inside Syria directing ISIS operations, in order to accomplish the destruction of Palmyra.  This is well beyond conjecture.

There is one more Obama failure, one of nightmarish proportions and one quite unforgivable.  VT nuclear specialists including top level weapons design personnel and IAEA NNP (International Atomic Energy Agency Nuclear Non-Proliferation) specialists are preparing a White Paper outlining advances in nuclear weapons design from the late 1950s onward.  These new weapons, 4th and 5th generation nukes, use up nearly all their fuel unlike the earlier weapons which used as little as 5%.  These weapons leave no residual radiation.

Under directives from the Nixon era, directives directly from Henry Kissinger, America has empowered field commanders with the authority to freely use tactical nuclear weapons.  Conventional weapons have no flash, no mushroom cloud, no ball lightning.  VT has discovered inexorable evidence that the US has used tactical nuclear weapons against Serbia, Iraq and Afghanistan and that Israeli and Saudi nuclear weapons have been used against Syria and Yemen.  Further, we have access to classified US investigation findings that show that terror organizations directly under the control of national intelligence agencies have full and open access to nuclear weapons.

Here is the criteria, simply put, for knowing you are nuked:

Undeniable proof exists that Syria was nuked by Israel on May 4, 2013.  VT, in meetings in Damascus that included representatives of Washington’s legal community, confirmed this attack.  The question to examine is why Syria and Russia remained silent.

The other issue is why and how President Obama has the nerve to pretend he has a bully pulpit with Iran or others when it can be safely assumed that Israel would not have used nuclear weapons without approval of President Obama.

https://www.youtube.com/watch?v=vm7ObVSix7w
This makes every word said by Obama since then a bare faced lie.  Top Syrian officials admitted to me that they were the victim of nuclear terrorism.  The United States is capable of detecting even the smallest nuclear event through its VELA satellite system.  On September 22, 1979, on Prince Edward Island south of Capetown, South Africa, America detected an Israeli nuclear test and remained silent, claiming a sensor error.

No one doubts America’s nuclear attack on the Baghdad airport in 2003.  It was “allowed” as retribution for 9/11, a terror act where Iraq was, perhaps, the least complicit of any actor in the world.

Let me reiterate, America has been using tactical nuclear weapons for decades, dozens, perhaps more all the while pretending to take the moral high ground.  To American commanders, the tactical nuke is the “go to” solution where large airstrikes might be simply “inconvenient.”  We stand ready to prove all of this using open source documentation.  It is that easy and we continue to wonder why no one else has bothered?  We all know the answer to that one, don’t we.

Watching Obama talk about “tyrants” and “barrel bombs” turns my stomach.  America runs ISIS, let’s all admit it.  America planted the brutal dictatorship in Kiev and has been warmongering against Russia since.

America knows its thugs downed MH17 and America has been totally responsible for the coverup and quite likely for the act itself.

America and Turkey have staged the refugee disaster that is crippling Europe today, part of a global strategy planned at the Rand Corporation by failed academics and “hangers on.”

There are very few opportunities like today where President Obama could have risen out of the filth and ignorance of his predecessors and spoken truth.  What was he thinking?