LOS ANGELES SKID ROW — The VA bureaucrats under direct supervision of VA Secretary Robert A. McDonald and in collusion with Los Angeles City and Neighborhood Council officials, hijacked a well-conceived plan by the Old Veterans Guard, Vietnam Veterans of America, Region 9, and Justiceville USA for an emergency Skid Row Humanitarian Relief Crusade and “Search and Rescue” mission for homeless Veterans.

And once again, the victim is a multitude of war-injured and impoverished Veterans who remain homeless and hungry on Skid Row. 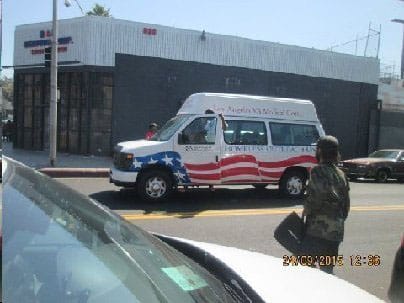 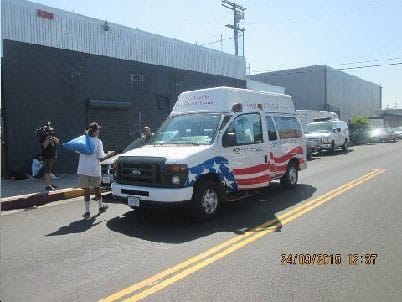 In spite of numerous requests, it’s been nearly three days since this VA “outreach” van left Skid Row on Thursday and we still do not have a legitimate and confirmed count as to how many homeless Veterans were transported to the Los Angeles VA — not a peep from the government hijackers.

We counted a maximum of eight homeless Veterans climbing into the VA van above, while Secretary McDonald’s “homeless expert” Vince Kane, claimed there were between “25 to 40” and KABC TV said the “organizers” claimed there were 25 by mid-afternoon — when the above photo was taken.

At least Vince Kane is consistent with his self-promotion and self-serving lies to puff up his failed image as a homeless expert representing Secretary McDonald.

On Thursday after boldly proclaiming at the VA that there were “25 to 40” homeless Veterans transported from Skid Row, that evening, Mr. Kane sent an e-mail stating that he was “told” there were 25 transported to the VA and promised that he would confirm the final count by Friday morning.

Mr. Kane remains consistent with his overall irresponsibility and refusal to be honest about anything.

In fact, it’s been one steady stream of lies from this incompetent and dishonest VA bureaucrat who must be fired, posthaste!

We’ve reached out to the “VA Outreach Team” for the accurate homeless number count, but they claim they haven’t been given any results by top VA officials.

We’ve asked Charles Green, Chief of Public Affairs at West Los Angeles VA as well as VA Secretary McDonald, and nothing but silence.

We’ve requested the total count from the Los Angeles Neighborhood Council Coalition — the VA’s “partner” in this sham — and absolute silence.

So, why is something as basic and public knowledge as providing the homeless count at Thursday’s event being silenced, shielded and stonewalled? 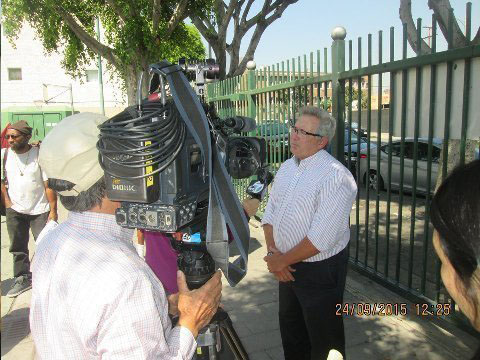 However, at the Skid Row event, Vincent Kane was very vocal and controlling of the KABC TV reporter even though he had zero to do with organizing or planning Thursday’s event (his underlings and LA Neighborhood Council Coalition worked in collusion to hijack the event), and he made sure the VA “homeless outreach” van was there to be filmed for TV coverage, instead of larger LA City Buses that were originally promised by a Neighborhood Council official.

In this one-sided TV coverage, Vincent Kane proclaimed: “We need to be doing this on a regular basis. We need to be sweeping the streets with our partners to ensure there are no veterans left on the streets.”

He’s already failed at his job and promise to end Veteran homelessness in Los Angeles by the end of 2015 — because he wasn’t “doing this on a regular basis” over the past several months, nor were his “partners.”

The only thing Vince Kane has done on a regular basis is to lie and steal the ideas of others idea’s and then take false credit while failing to properly execute the stolen ideas and plans. He must be fired, posthaste!

All in all, it was more lies and deception to give the illusion that Vince Kane — Secretary McDonald’s “homeless expert” — was getting credit for something he had absolutely nothing to do in reaching out to give aid and comfort to our homeless Veterans.

For more than seven years, the Old Veterans Guard led the cause to expose the biggest land-fraud scandal in American history in our nation’s capital for homeless Veterans.

Then VA hacks Robert McDonald and Vince Kane showed up a few months ago at the Los Angeles VA.

They’re like blisters … showing up after the work has been done and then producing more pain than comfort.

The foregoing notwithstanding, on Thursday afternoon while arriving at the Los Angeles VA to receive homeless Veterans from Skid Row, our professional documentary film producer who covered the Skid Row meeting with do-nothing politicians, was blocked from filming at the VA by Charles Green and VA police, as was another independent photographer, while KABC TV was given carte blanche.

If Mr. Kane and Mr. Green worked as hard at producing the actual number of Veterans who were transported from Skid Row to the VA as they did in dominating KABC TV and blocking others from covering this story, they’d be living up to their entrusted responsibilities as public civil servants to do the right thing.

The Old Veterans Guard, Vietnam Veterans of America, Region 9, and Justiceville USA — it was our original plan — were all denied equal access to the secretive “revised” planning of the recent Skid Row project, while LA City and Neighborhood Community officials met behind closed doors and accomplished what always happens with this type of secretive collusion with the VA, and that is failure at the expense of a multitude of war-injured and homeless Veterans

And let us not forget that the City of Los Angeles — the VA’s “partner” — controls 12 acres of Veterans land — RENT FREE — for a public dog park, public baseball diamonds and soccer fields, and a public parking lot.

And anytime you mix Skid Row with VA Secretary McDonald and his bureaucratic henchmen, expect more lies and corruption.

Have we already forgotten that when Secretary McDonald was at Skid Row the day after he fraudulently vacated the Federal Judgment nine months ago, he lied about his military service claiming he was a member of the Special Forces, when he was not.

Responding to the Secretary’s falsified exaggeration, then National American Legion Commander Michael Helm proclaimed: “A lie is a lie.”

Robert A. McDonald is a pathological liar and fraud who must be fired, posthaste!!

When the Old Veterans Guard, Vietnam Veterans of America, Region 9 and Justiceville USA submitted our plan to end Veteran homelessness beginning at Skid Row with a Humanitarian Relief crusade and “Search and Rescue” team, the sinister VA bureaucrats operating directly under Secretary McDonald along with the VA’s partners — LA City and Neighborhood Council officials — hijacked and destroyed the good will and possibilities of success for this noble cause — and they did it behind closed doors.

VA Secretary McDonald guaranteed transparency and openness with the public, but so did Josef Stalin.

Robert A. McDonald must be fired, posthaste