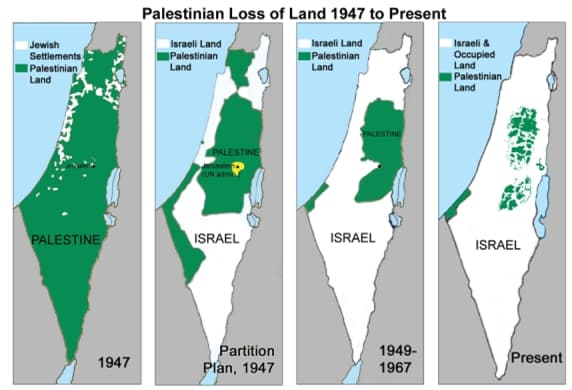 Israeli Prime Minister Netanyahu was right about one thing (and only one thing) when he addressed the UN General Assembly. “Israel’s values,” he said, “are on display every day.”

Indeed they are, clearly visible in

The values reflected by those realities are welded together in many Israeli Jews who have been brainwashed by Zionist propaganda of which Netanyahu is the master by a sickening self-righteousness.. (Way back in 1987 this self-righteousness was described by a former Director of Israeli Military Intelligence, Yehoshafat Harkabi, as the biggest real threat to Israel’s existence),

I think the key to understanding what is driving Netanyahu to tell bigger and bigger propaganda lies to support his assertion that Israel is the victim and in danger of annihilation was in a recent analysis by Jonathan Cook.

He described Israel as (my emphasis added) “growing ever less sophisticated, ever less capable of concealing its central goals.” He added, “It looks uglier, not simply because things are getting worse but because they are finally out in the open“.

And his end thought was this (my emphasis added).

“The popular shift rightwards in Israel means that even the left can no longer afford to keep its racism hidden from view. That is why it is past time for the international community to admit there is no prospect of an Israel, of either the left or right, becoming a partner for peace.”

My speculation is that when Netanyahu allows his mind to engage with reality he is aware that a day may be coming when, in order to protect their own best interests, the governments of the major powers, including the one in Washington D.C., will say to Israel something like: “Enough is enough. If you do not end your defiance of international law and become serious about peace on terms the Palestinians could accept, you will be totally isolated and sanctioned.”

That’s why I believe that Netanyahu’s main message from the General Assembly platform was addressed not to the world but to Israel’s Jews. On Israeli primetime television he was saying to them, implicitly but effectively, “If the UN does not stop bashing us and the world turns against us, we must be united in our determination to tell the world to go to hell.”

How Israel’s Jews would actually react if they were put on notice that they would be subjected to complete isolation and truly effective sanctions if they did not require their government to become serious about peace on terms the Palestinians could accept can only be a matter for speculation.

My guess is that some, perhaps many, would pack their bags and leave to start a new life elsewhere. But left behind, in a walled-in, nuclear armed fortress, would be the zealots who would be prepared, as Golda Meir once said to me in a BBC Panorama interview when she was Israel’s prime minister, to take the region and the world down with them.

And they, I believe, are the constituency to whom Netanyahu was appealing from the General Assembly platform.

As I have previously written I also believe the prospects of the major powers using the leverage they have to try to cause Israel to end its defiance of international law and denial of justice for the Palestinians would be significantly improved if the Palestinians insisted on the dissolution of the corrupt and impotent Palestine Authority (PA) and handing back to Israel complete responsibility and full accountability for the occupation. (I know that’s a tough ask because many thousands of Palestinians would lose their jobs and pay).

In his speech to the General Assembly Palestinian “President” Abbas hinted that this could be a next step, but there’s no reason to suppose it will happen on his watch. He and his leadership cronies have too much to lose by angering Netanyahu that much.

As things are I am finding it more and more difficult to resist the conclusion that the story of the conflict in and over Palestine that became Israel can only end in catastrophe for all.