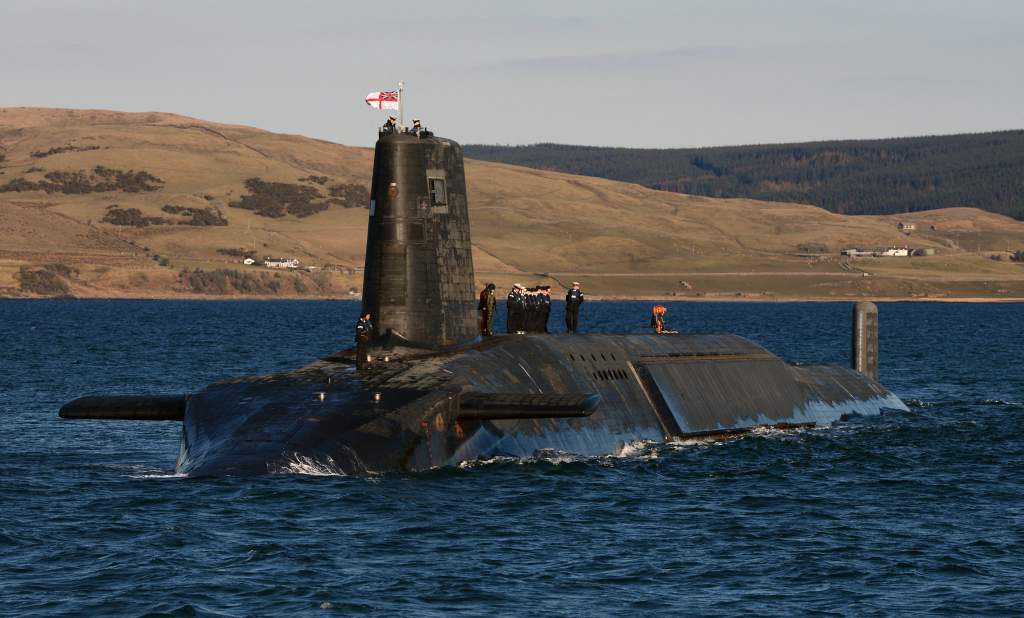 Next year Britain will decide whether to replace her four Vanguard-class Trident submarines. The Labour Party’s shadow defence secretary in April said his party would commit to renewing the entire WMD kit if it won the general election. They didn’t win, but the nuclear weapon pledge now puts new Labour leader Jeremy Corbyn in a tight spot. Corbyn is for nuclear disarmament, a key plank in his landslide leadership campaign.

So much so that he promised supporters a debate on Trident at last week’s party conference. But he had to U-turn after the unions blocked discussion. So it’s unclear where Labour really stands. And time is running out. Entrenched positions for and against spell confusion and self-destruction ahead.

They all seems to think Trident is “independent”. Or they are trying to kid us that it is. A number of states around the world have nukes and the means to deliver them. They all manufacture and maintain their own and have complete control over their use. Britain isn’t one of them. Our Trident missiles are manufactured by Lockheed Martin in the US and serviced by the US Navy. So if Britain detached herself America’s lunatic foreign policy what would our “independent” nuclear deterrence be worth… having spent £100 billion of British taxpayers’ money upgrading it at the expense of hundreds of essential social and industrial programmes that are crying out for the money?

And what is Len McCluskey, boss of the Unite union, talking about when he threatens to vote down any Labour Party motion to scrap Trident because “the most important thing for us is jobs”? How many British jobs will be lost if we don’t buy something that isn’t manufactured or serviced here? We’d still need a submarine fleet, with or without Trident. And the £billions saved should mean a far bigger investment in jobs here, not in the US.

The idea of a truly independent nuclear deterrent was dismissed in a 2006 White Paper, which said the substantial investment wasn’t worth it merely to insure against the unlikely event of a lasting breakdown in relations with the US. It therefore made sense to continue procuring the guts of the system from the US. As a result we have neither an independent nuke nor an independent foreign policy.

New Labour Party leader Jeremy Corbyn has caused consternation in Establishment circles by saying that if he became prime minister he wouldn’t press the nuclear button. Even if he did, it is true that the US could not stop us launching the missiles. But to target Trident accurately, I’m told, the launching submarine needs access to US systems at the time of launch. Besides, would the US really sell a WMD system even to a close friend without safeguards to ensure it was used strictly in the furtherance of US interests? Someone needs to come clean on all of this.

The Trident issue will be an early test of Labour’s integrity. It’s as plain as a pikestaff that the UK, staggering under a £1.5 trillion debt burden, not in control of its borders, its cherished national health service on the verge of collapse, manufacturing decimated and having little prospect of regeneration under EU procurement laws, lacking in skills, suffering deep slashes to benefits and other social programmes, and with countless thousands reliant on food-banks, simply cannot afford to splash out on such a cripplingly expensive new toy for its political and military poseurs.

The Labour Party was unelectable before Jeremy Corbyn and John McDonnell made their ‘outsider’ bid for leadership. Instead of having to recruit to their front bench people who fundamentally disagree with them, and being overruled by union bosses, Corbyn might begin to consider breaking away and, with his massive grass-roots support, building a new fit-for-purpose political organisation and leaving the passé Blairites to wallow in their failure. As things stand, they’ll never present a unified, coherent image to voters.

Such a wrench seems unlikely though, because both men are too much in love with the old Labour Party of Keir Hardie. Hardie was one of the first two Labour MPs elected to parliament in 1900, a small beginning from which the Labour Party grew to win power in 1924. Corbyn rounded off his conference speech by quoting Hardie: “My work has consisted of trying to stir up a divine discontent with wrong. Don’t accept injustice, stand up against prejudice. Let us build a kinder politics, a more caring society together. Let us put our values, the people’s values, back into politics.”

Fine words. But I doubt if the present Labour Party, with its Blair/Brown hangover and fatally corrupted views, will allow any of that. Another new beginning is needed if Hardie’s “kinder politics” and “more caring society” are to be realised. Corbyn’s appeal is not confined to what used to be called the working class. It extends well into the sensible middle class. ‘Labour Party’ is a 19th century brand name that brings with it too much unwanted baggage and negative vibes. It is an inappropriate vehicle in the 21st century.