Home Life Why would the US pick Turkey over the Kurds? 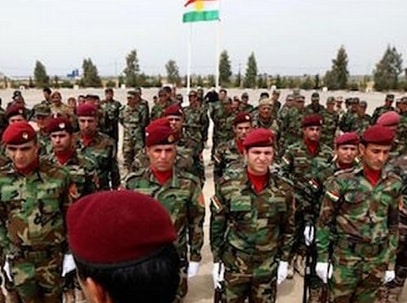 Kurdish Peshmerga at a graduation ceremony in Erbil, April 2015

There is an increasing distance between US interest and that of Turkey as well as between the EU and Turkey. Once the stalwart of NATO’s eastern defense the breakup of the Soviet Union and the subsequent removal of the Warsaw Pact nations as a threat, in fact many becoming NATO members, reduced the strategic leverage Turkey offered.

The current ruling party in Turkey, the Justice and Development Party (AKP) has been moving Turkey farther from its pro-western secular founding principles and closer to a single party dictatorship. The AKP has not however been able to totally subordinate the democratic system and there has been sufficient push back to hold somewhat to the rule of law and maintain an opposition, however tenuous those positons may be.

The Kurds have been, on the other hand, moving in the opposite direction. While there have been a number of obstacles in the transition from tribal to democratic government the Kurds continue to move forward, however slowly. In Iraq the Kurds are a self-governing semiautonomous part of a federal government with their own military and economic system. In Turkey following years of war the Kurds have found political power and currently are the third largest party in parliament. The AKP however is doing everything it can to reverse this, denying a coalition government and forcing a new election while instigating renewed fighting with the PKK. In Syria following the defeat of the Syrian Army by ISIS the Kurds began to administer the Kurdish region, now called Rojava, and have defended it against ISIS, while Turkey showed indifference and sometimes open support for ISIS. Only in Iran are the Kurds helpless before a tyrannical regime.

Why then does the United States, and the rest of the world for that matter, refuse to recognize the current facts. Why then does the west allow Turkey to subjugate its Kurdish population in ways that in any NATO country would be considered a crime?

The answer to this is historical inertia. People, nations, civilization resists change. Change has always preceded or followed a catastrophic event and comes with a high price that tends to destroy the civilizations in which it occurs. These events can range from the introduction of the Automobile to a World War. Today the world is changing and the United States is caught unprepared and unwilling to adjust its foreign policy. To add to the problem recent events conspire to turn the attention of the world to the past.

When ISIS burst upon the world with the swift capture of territory in Syria and Iraq it stunned and frightened the world. The capture of Mosul and subsequent victories followed by the collapse of the Iraqi army left only the Kurds as a viable force, that indeed faced up to the onslaught and after early reversals not only stemmed the tide but reversed it to recapture lost territory and gain additional area in the Kirkuk governorate.

This last was a watershed moment for Turkey since it was a combined Kurdish force of KRG Peshmerga, YPG and PKK fighters that had engaged ISIS. Turkey has always been paranoid about any sign of Kurdish unity and always sees it as a precursor to a move to independence. More recently the Kurdish HDP party won 80 seats in the Turkish Parliamentary elections. Following Syrian Kurds’ victory against ISIS in Kobane there was a bombing in Suruc, giving the Turks an excuse to end a truce between the PKK and Turkey. It was also an opening for Turkey to declare its intent to fully join the coalition attack on terrorists and allowed the US to use the airfield at Incirlik. While the US assumed it meant attacks on ISIS Ankara broadened the war on “terrorism” to include the PKK, to the consternation of the US. But other than making diplomatic noise nothing was done. Can the use of Incirlik mitigate the responsibility the US and the rest of NATO have to support the more stable and successful partner in the fight against ISIS, the Kurds.

Add to this the recent moves by Russia, not only into Syria, but the long range anti-aircraft defenses now in Kaliningrad, between Poland and Lithuania which can shut down air corridors over Poland, and the recent moves into the Crimea which now controls much of the Black Sea. “Essentially, their [anti-ship] cruise missiles range the entire Black Sea, and their air defense missiles range about 40 to 50 percent of the Black Sea” according to NATO commander Gen Breedlove. The movement into Syria includes long range anti-aircraft missile and sophisticated air intercept fighters, not needed to fight ISIS but, as pointed out by Breedlove, can set up a “layered anti-access/area denial system that could complicate US and allied operations in Syria and well beyond.”

What has all this to do with Turkey the Kurds and western foreign policy? Returning to historical inertia we know that the west holds a view of sovereignty that goes back to the mid-15th century, with the Treaty of Westphalia, which in part established the concept of boundaries of sovereign states and non-interference in their domestic affairs. Turkey, Iraq, Iran and Syria are sovereign states and the Kurds are not. We may see an inconsistency with this in Syria but the west is fighting ISIS and calling for Assad’s removal by diplomatic and political means. Anti-Assad fighters are being supported only so long as they fight ISIS.

With a reemerging Russia the strategic and tactical relevance of Turkey for NATO is reestablished. With a feckless US foreign policy and a struggling EU, Turkey is once again the anchor of the eastern NATO boundary. The Kurds will be supported in their fight against ISIS but Turkish attacks on PKK and YPG will be ignored for the larger perceived needs of the west.

What hope then for the Kurds? As I stated above, change is not an easy thing for nations and it will take a catastrophic event. We maybe there if the region continues in chaos and external forces break down the boundaries established and new countries emerge. Can the Kurds, especially the KRG, prepare the west for such a change? Time will tell, but time may be running out.

Paul Davis is a retired US Army military intelligence analyst and a consultant to the American intelligence community specializing in the Middle East with a concentration on Kurdish affairs. Currently he is the President of the consulting firm JANUS Think in Washington D.C.