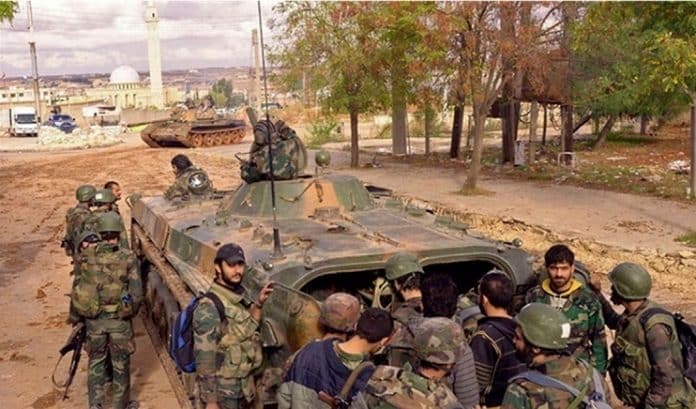 TEHRAN (FNA)- Military sources informed on Wednesday that the Syrian Army, with the aerial support of the Russian fighter jets, stormed the militant groups’ defense lines in the Northern flank of Hama and retook full control over three key towns.

The sources further added this has been the first major operation in the province since the summer of 2014.

The Syrian army’s 87th Brigade announced the recapture of Al-Mughayr, Ahaya, and Markabat towns after fierce clashes with the militant forces earlier this morning.

Following the capture of Al-Mughayr, Ahaya, Markabat, the Syrian Armed Forces stormed the towns of Morek, Qala’at Madayq, Latmeen, Al-Lataminah, Kafr Naboudat, and Kafr Zita, where they are currently engaging the terrorist groups in a series of intense firefights for control.

The primary objective of this offensive is to seal off the Northern Hama border with Idlib and build a buffer-zone around the city of Khan Sheikhoun. “Once they do so, they will be able to concentrate on the remaining pockets in the Hama governorate that are under the control of the militants,” military analysts said.

Khan Sheikhoun is strategically located on the important Aleppo-Lattakia Highway (M-4 Highway); it was lost last spring during a large militant offensive that forced the Syrian army to withdraw to the Northern Hama city of Mhardeh.

On Tuesday, the Russian warplanes conducted an air raid on the ISIL-stronghold of ‘Aqayrbat in the Hama governorate, where they struck a terrorist convoy on the road to the city of al-Salamiyah.