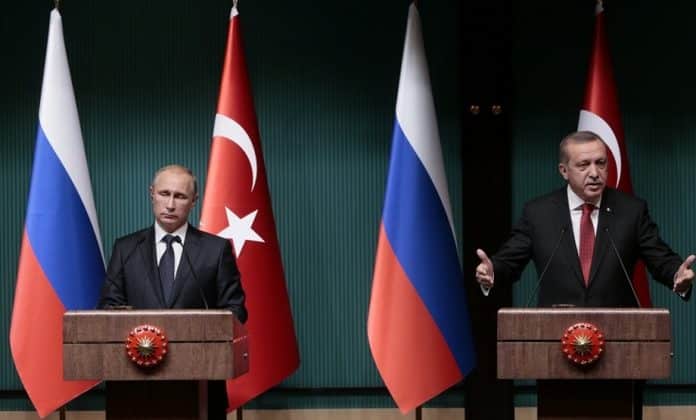 SOCHI, October 8. /TASS/. Russian President Vladimir Putin has been informed of the remarks of his Turkish counterpart Recep Tayyip Erdogan about the possibility to abandon the purchases of Russian gas. However, the Kremlin hopes to maintain mutually beneficial cooperation between the two countries, considering the operation in Syria to be the assistance to ensure security on the Turkish borders.

“The president, has, of course, been informed about such statements of Mr. Erdogan. We traditionally highly appreciate our bilateral relations with Turkey, we sincerely hope that these relations will continue to develop further in accordance with the plans outlined by President Putin and President Erdogan,” Russian presidential spokesman Dmitry Peskov told reporters.

The Kremlin spokesman added that “this cooperation was mutually beneficial and was in the interests of the peoples in the two countries.”

He noted that the military operation in Syria helped to ensure security on Turkey’s borders, something which the US-led coalition’s bombing raids failed to achieve.

“As for Russia’s actions in Syria, these actions are intended to promote the preservation of Syria’s territorial and political integrity, thus contributing to stability and security in the region, which, in fact, is adjacent to Turkey’s borders,” Peskov said. “In this regard, Russia is certainly contributing to ensuring more stability and security near the Turkish borders.”

The Kremlin spokesman said it was necessary to recall that,

“Before the operation of the Russian Armed Forces to support the Syrian army, the US-led coalition consisting of various countries has for a long time – more than a year – been carrying out strikes on the positions which were qualified as Islamic State positions. “The territories controlled by this and other terrorist groups has not shrunk a bit as a result these strikes. On the contrary, over the past year this area has increased many-fold, which is, actually, destabilizing the situation in Syria itself, and, of course, poses a threat to Turkey,” Peskov said.