Home World On Jews and Criminality 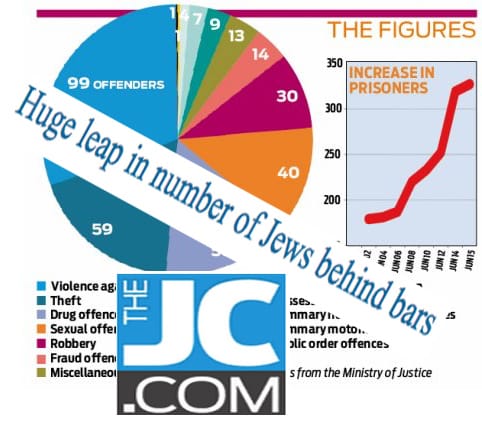 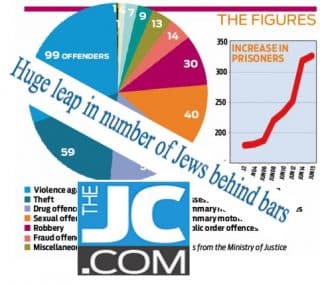 The Jewish Chronicle revealed today that the “number of Jews in prison has increased by 82 per cent since 2002, nearly four times more than the national rate.” The most common crimes Jews were convicted of were violence against another person, sex offences and drugs.

But, some good news – according to Rabbi Michael Binstock, director of Jewish Prison Chaplaincy, “the figures undermined the stereotype that Jewish offenders were more likely to be guilty of so-called white-collar crimes.” The Jewish assimilation project has at last prevailed.

As Rabbi Binstock asserts “the myth is they’re all there for fraud, which is untrue. We have a lot of sex offenders, paedophiles and abusers, and several serving life for murder — the full gamut of crime, in fact.”

It seems that in spite of the huge leap in the number of Jews behind bars, Jewish criminals are not over represented in British jails.  The most recent census in 2011 showed that Jews make up 0.47 per cent of people in England and Wales, while Jewish inmates constitute 0.38 per cent of the prison population.

And this is a relief, because the Jewish Zio-con elite is vastly over-represented in our media, finance and political lobbying. They are advocating and pushing our kingdom into more and more immoral interventionist wars. Their efforts are making our entire society into a criminal collective.

Britain is holding its breath for the trial of Lord Janner who allegedly fiddled with orphans in his marital bed at the time he was the official representative of British Jewry (as the President of the Board of Deputies of British Jews, 1978-1985). The new findings confirm that there is a serious issue with sex crimes within the community of the chosens- “though Jews committed proportionately much less theft than the wider population, three times more members of the community were convicted for sexual offences.”

Maybe one way to resolve this embarrassing surge in the number of Jewish sex offenders in the UK is to make an exception for the Jews; accepting that members of their community are slightly more titillated and should be exempt from laws against sex offences. I am sure that the forceful Conservative Friends of Israel (CFOI) together with its twin lobby group, the Labour Friends of Israel, know how to push for such a change in British law.  After all, the vast majority of British MPs are affiliated with these two ultra Zionist lobbies and committed to Jews and their interests.

Seemingly, the Palestinians, who have been seen their homeland robbed for more than a century, are not alone: twice as many Jews (in comparison with the rest of Brits) are imprisoned for robbery (theft by means of force or fear).

The Israeli Knesset has always been a shelter for Israeli and Jewish criminals.  Most Israeli political and military leaders are war criminals awaiting conviction.  And when it comes to the robbery and theft of Palestine, the entire Jewish state and the vast majority of world Jewry are complicit. I guess that the statistics published today by the Jewish Chronicle help us to grasp the Jewish cultural continuum.