Home Government Why a Third Intifada will not take place

In the last couple of weeks, with persistent Israeli aggression around the Al-Aqsa Mosque culminating in preventing “Palestinians” from entering the Old City of Jerusalem, the world saw a spate of violent confrontations, mainly between marauding armed Israeli settlers harassing and shooting young Palestinians, and young Palestinians retaliating by stabbing the settlers and members of the Israeli Security Forces.

While these “unscheduled” escalations and confrontations seem to lead to a more organized Third Intifada, it is a well-managed “venting of anger” by Mahmoud Abbas and his Palestinian Security Forces allowing young Palestinians to confront Israeli army and settlers, with limited Palestinians casualties.

Mahmoud Abbas and his Security Forces, seen by most Palestinians as “auxiliary” security forces for the Israeli Occupation, tried to polish up their image by staging a standoff with Israeli defense forces east of El-Bireh, when Israeli forces arrested a young Palestinian, and Abbas Security Forces came to the rescue. On cue, the Israeli forces retreated and let go of the young man. The news of this “staged confrontation” was all over Abbas media.

With so many vested interests in Political Ramallah and its partnership with Palestinian Oligarchs; with big investments in the Occupied Territories and Israeli settlements; large investments in Israeli-style “Palestinian Settlements” like Al-Rawabi; billions of consumer loans at risk; and with tens of thousands of Fatah operatives relying on the monthly dole from Mahmoud Abbas, it is unlikely that a Third Intifada will take place. There are too many financial and political vested interests to allow things to go out of control and see Abbas and Fatah go out of business.

Add to this the hundreds of NGOs, whose only function is to spew reports on the occupation with questionable value, which are fully funded by international governments and organizations as part of keeping the “peace process going”. No NGO dares to cross the red lines and promote, advocate, let alone manage a Third Intifada. All funding would dry up, and hundreds of NGO’s would go out of business.

The First Intifada broke out in December 1987, when an Israeli truck deliberately drove over a civilian car in Jabalia Camp, killing four civilians. It started as a demonstration, venting anger, and it escalated when Israeli forces started to use deadly force.

The late Yitzhak Rabin winner of the Nobel Peace Prize ordered his army to “ break the arms of any and every Palestinian who throws a rock” against the IDF or Israeli settlers. Bibi Netanyahu told his army to shoot and kill any one throwing a rock.

News of the First Intifada was all over the front pages of international media and television, pitting Palestinians armed with rocks and stones against the Israeli “Goliath” with tanks and armored vehicles.

Yasser Arafat and his not so intelligent “intelligence agencies” were taken by surprise, since the PLO and its leadership, while enjoying comfortable hotels and hot brothels, was not interested and had little knowledge nor concern about what was happening in the Occupied Territories.

The PLO, demoralized and broke with tens of billions looted, unaccounted for and marginalized after siding with Saddam Hussein in his invasion of Kuwait, saw the First Intifada as “Allah sent” gift to “reinvigorate” the PLO and its discredited leadership.

With what little money left, Arafat and Abu-Jihad injected a few million dollars, and were able to snuff out the First Intifada through “joint” Israeli-Palestinian agents, who later returned with Arafat to form and organize his security forces. Ending the First Intifada was the favor that drove Yitzhak Rabin to begin secret negotiations with Yasser Arafat in Oslo.

The Second Intifada, just like the First, did not fair well. It started when Jibril Rajoub, then head of Arafat Preventive Security Forces, gave assurance to then Minister of Internal Security Shlomo Ben-Ami that Ariel Sharon’s visit to the Al-Aqsa Mosque or Temple Mount (September 2000) would not create a problem, as long as Sharon does not enter the Aqsa Mosque.

Young Palestinians, angry at such a visit from a man seen as the perpetrator of the Massacre of Sabra and Shatila, began to throw stones and rocks at the Israelis surrounding the Mosque, and also at Israelis at the Wailing Wall.

The Second Intifada, unlike the First, which was characterized by its non-violent nature and use of boycott of Israeli Civil Administrations and products from Israeli Settlements, was more violent, leading to the death of 3,000 Palestinians and the death of 1,000 Israelis.

It was during the Second Intifada that the world saw the use of “suicide bombings” by Palestinian resistance movements targeting Israeli soldiers, businesses, buses and public places.

It also saw the deadly siege and attack of the Jenin Refugee Camp (April 1-11, 2002), when 55 Palestinians were killed and more than 140 homes were bulldozed and demolished. The US was able to prevent a UN board of inquiry into the attack on Jenin.

During the same period (April 2- May 11, 2002) was the siege of the Church of Nativity when Israeli forces laid siege to the Church holding Palestinians members of the resistance.

The world saw footage of Israeli tanks deliberate driving over parked Palestinian cars, and destroying light poles and sidewalks as added measures. Israel destroyed the entire infrastructure of the City of Bethlehem.

The US and Israel blamed Yasser Arafat for the Second Intifada, and he in turn took advantage of the Second Intifada to get rid of his potential rival, Marwan Bargouthi. With the help of Arafat intelligence services, Bargouthi was arrested and charged with multiple murders.

Arafat became irrelevant to both Israel, the US and the international community having delivered to Israel what it wanted most — full, unconditional recognition, a Palestinian Authority that is both an administrative and security contractor for the Israeli Occupation. Mahmoud Abbas took center stage.

The Second Intifada came to an end when Mahmoud Abbas, in a “summit” with Ariel Sharon in Sharm el-Sheik, gave his commitment to stop all acts of violence against all Israelis everywhere. Abbas kept his promise till today. Israel never stopped its violence against the Palestinians and never stopped expanding its settlements.

The Second Intifada once again showed the incompetency and recklessness of Yasser Arafat, who committed the same mistakes he did in Jordan and in Lebanon, with no exit strategy, not even as an afterthought. He paid for his “stupidity”, not his valor.

It should be noted here that Jibril Rajoub, then head of the notorious Palestinian Preventive Security, abandoned and ran from his post in the $8 million Preventive Security Forces headquarter funded by the US, a few minutes before the Israelis attacked the headquarters, killing members of his security forces and prisoners he kept locked up while he fled. 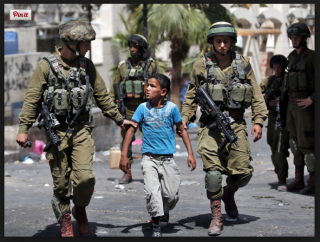 An Intifada will not be an Intifada to end the longest occupation in history if it is not a massive public movement, non-violent leading first to the disbanding of the Palestinian Authority and the PLO.

The Palestinians must forget about the two states and independence from Israel. Their independence and freedom come when they are full and equal citizens of the One State for all of its people.