We all know the Israeli and IDF drill already: you provoke Palestinians and then beat them up real bad for reacting to your provocation.[1]

You remember how the Israeli regime and their lackeys such as George W. Bush used this strategy in Iraq just a few months before America invaded the country?[2] You remember how they used similar methods during the USS Liberty incident?[3]

We have recently seen similar strategies at work. In a recent video that is going viral,

“undercover Israeli agents who had infiltrated [a] group of Palestinian stone-throwers suddenly pull weapons on the group they are throwing stones with, shooting and wounding three of them, one seriously. The incident occurred outside Beit El, near Ramallah, in the West Bank.

“Reuters correspondent Luke Baker witnessed how the armed undercover agents helped to incite the stone throwing and tweeted the video below with the text: ‘Footage in Ramallah shows undercover #Israeli police throwing stones at Israeli forces and inciting #Palestinian youth to do the same.’”

The Times of Israel itself reported that “One undercover Israeli even had a green scarf for Islamist terror group Hamas trailing from the pocket of his jeans.”[4]

How does Benjamin Netanyahu respond to the violence? Listen this genius:

“Israeli civilians are at the forefront of a war against terrorism and must also be on maximum alert. The goal of terrorism is to spread fear, and the way to defeat it is to maintain composure and resilience on both a national and personal level.

“We have known worse times than this, and we will overcome this new wave of terror by maintaining our determination, responsibility and unity.”

What did the violence have to do with Israeli civilians? Did the mad man in Tel Aviv even look at the location of the incident? When will this man start making sense? How much blood will he have on his hands when he leaves this earthly pilgrimage? And what will it take for members of the Dreadful Few such as Howard Stern to rise up and stand up for reason, morality, justice, human rights, and ultimately the truth? It really gets pathetic when Stern gets on his show and then comments:

“The Arab world has to be taught a lesson, that we are the boss and you are going to be our dogs… let Israel loose… it could be taken care of in an hour; you could wipe them off the face of the earth…I’d blow up… the Palestinians… blow them all up and be done with them, and you won’t miss a night’s sleep.”[5]

Wait a minute. Where are Sarah Palin, Michele Bachmann, and other political prostitutes and whores? Didn’t they pronounce ad nauseam that America needed to confront former Iranian president Mahmoud Ahmadinejad for allegedly saying that Iran wanted to wipe Israel off the map? Didn’t the Neoconservative mush-heads reproduce that lie ad infinitum? Didn’t the New York Times publish the lie again and again?[6]

Where is so-called conservative Michael Savage (real name Michael Alan Weiner), who writes that Iran “vowed to wipe Israel off the map, and sponsored terrorism and revolution all over the Middle East, including the Houthi revolt in Yemen”?[7] Where are the Christian Zionists such as John Hagee and David Jeremiah, who write the same thing in one book after another?[8] Where are Jewish historians Walter Laqueur and Barry Rubin, who perpetuate the same lie?[9] How about Hillary Clinton?[10] And Robert Spencer?[11] And Alan Dershowitz?[12] And Brigitte Gabriel?[13] And Joshua Muravchik?[14]

Honestly, if we count the books and articles that have been written on that lie alone, you would think that Ahmadinejad was out to destroy the entire world. Yet when a big Jew like Howard Stern says that Israel “could wipe” the Palestinians “off the face of the earth,” virtually the entire world is silent because it is a good thing. After all, the Goyim are donkeys, as the late Ovadiah Yosef reminded us.[15]

As the Palestinian Lebiberation Organization (PLO) rightly stated, what if another ethnic group were to make such comments about Jews or Israelis and their puppets? Wouldn’t they cry like babies asking for milk all over the media ad nauseam?

Where are the New York Times, the Washington Post, the New York Post, CNN, Fox News, USA Today, U.S. News and World Report, the Wall Street Journal, etc.? Do they mean to tell us that Stern is not a significant voice but some obscure Palestinian young man who throws rocks at an Israeli tank is to be taken seriously? How does that logic work? Did I miss something in my logic courses in college? And how can these people maintain such a vital and elementary inconsistency while their heads do not explode?

What Stern is telling us here is that Jewish racism is good racism. Stern even called former Pink Floyd member Roger Waters a “fu$khead” for his anti-Zionist activism.[16] According to this logic, we at VT are all “fu$kheads” because we stand against the Zionist machination of the West. Waters, said Stern, “can’t fu$king deal with”[17] the Israeli/Palestine conflict because Waters stands for the disadvantaged and weak and needy.

Stern continued to say that the Israel/Palestine conflict “bugs the shit of out Roger Waters” because he cannot see that “Jews are getting killed all over the world.”[18] Where is that happening? In Europe? America? Asia? Latin America? Israel? Gaza? Who really needs to clear his head here?

Rogers made it quite clear that he is not anti-Israel. In fact, he told Haaretz:

But defining the parameters is not enough for Stern. So long that you stand against potentates like the Israelis, then you are a “fu$khead.” Last year, while the Israelis were slaughtering Palestinians during Operation Protective Edge, Stern declared,

“Israel’s at no fault. Jews get enough shit all over the world … Jews are the indigenous people of that area. The Arabs don’t even want those Palestinians .. nobody wants them.  If you’re anti-Israel you’re anti-America. [It’s] the only democracy over there, the only friend we have .. who’s willing to fight and stand up for what’s right.”[20]

Stern justified his statements by saying that America “was founded on white people coming in and obliterating the native population.”[21] Once again, what we are seeing here is that Stern is indirectly and subtly making the case for survival of the fittest, a Darwinian ideology which is quite congruent or in competition with Talmudic discourse, which is basically “the center of Jewish worship.”[22]

Moreover, by saying crazy things like that, Stern could not realize that he was undermining his own mines. He cannot really criticize Hitler at all. If the Israelis are justified in literally obliterating the Palestinians, how can Stern say anything meaningful about Nazi Germany? Doesn’t he consider concentration camps bad? If yes, then what in the world is this guy saying here? Nazi concentration camps are bad but Gaza concentration camps are good? Stern said:

“I mean, if Hitler put out the greatest rock album of all time, if Hitler produced The Beatles Whit Album, I still don’t know that I could have stomached buying Hitler music.”[23]

According to this logic, Hitler could not do anything good at all. Everything he ever did was evil, despite the fact that the historical record tells us something different.[24] But Stern wants us all to stomach Israel’s indiscriminate killings of civilians? He wants us to go along with Israel’s blatant apartheid?[25] Well, we should send him an ultimatum: we are not going to buy this new chutzpah. He can send it to Israel. 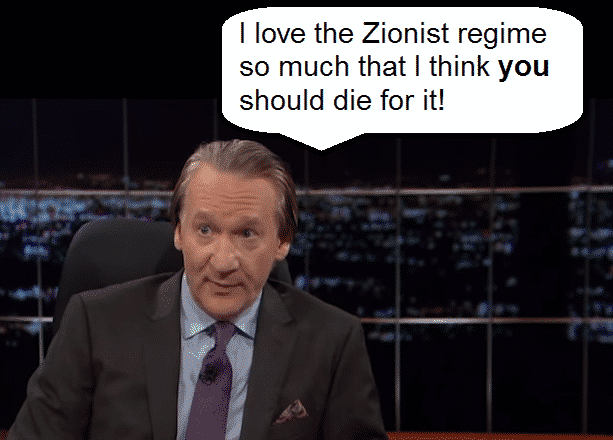 Both Bill Maher and so-called atheist Sam Harris support Stern’s madness. “I’ve never hid the fact that I don’t think it’s a conflict where both sides are equally guilty,” said Maher. “I’m more on the side of the Israelis.”[26]

Harris put his essentially Talmudic spin on this whole issue this way: “The truth is that there is an obvious, undeniable, and hugely consequential moral difference between Israel and her enemies. The Israelis are surrounded by people who have explicitly genocidal intentions towards them.”[27]

Ladies and gentlemen, this is the man who inveighs against Crusaders in the Middle Ages! And the same Harris thinks that his goal in life is “to demolish the intellectual and moral pretensions of Christianity in its most committed forms.”[28]

Well, thank God that Harris is getting a teaching moment from Vladimir Putin.

[6] See for example Nazila Fathi, “Iran’s New President Says Israel ‘Must Be Wiped Off the Map,’” NY Times, October 27, 2005. I must give the Washington Post some credit this time for dispelling the myth. Glenn Kessler, “Did Ahmadinejad really say Israel should be ‘wiped off the map’?,” Washington Post, October 5, 2011.