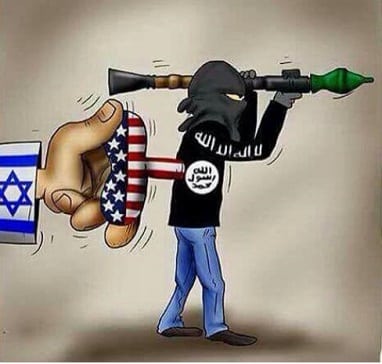 When watching the video above, providing YouTube doesn’t take this one down as well, you will see the bag of leaflets opened.  This is where they cut the video.  The image above depicting Israeli control of America and American control of ISIS is a very real image and was on the leaflets. 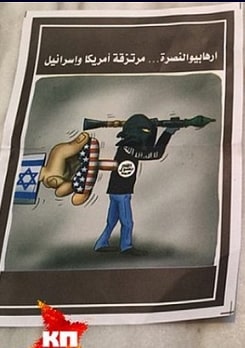 There were several leaflets included, one warning of impending Russian bombing, the other, the one with the image above depicted now in its entirety, may well be intended for unwitting jihadists who are simply too stupid to know they are fighting a “placeholder war” on behalf of economic interests that well informed and outspoken individuals cite as accurately depicted in the graphics now censored.

In discussions with a senior military intelligence source in the US yesterday, two issues came up:

As for the number, “800,” I was told that the Pentagon believes that figure to be low.

As for the air confrontation, they are looking into it but they believe it happened.

The scale of what is going on here is based on two major engines. First is the corruption in our political, military and security branches that have discovered that running an international anti-terror campaign to combat the terror campaign they are actually running to be the lotto prize of all time…one that pays off forever and the tickets for it are purchased with taxpayer debt financed funds.

And second is what can only be called a humiliating non reaction by the American people, who by doing virtually nothing, have doomed their children and grandchildren to live under this boot, because the longer it goes on the more it becomes effectively a “case law” situation where no one will even think of challenging this god awful sitation. It will “for practical reaons” just be considered a “done deal”, that only dreamers would think it could be changed.