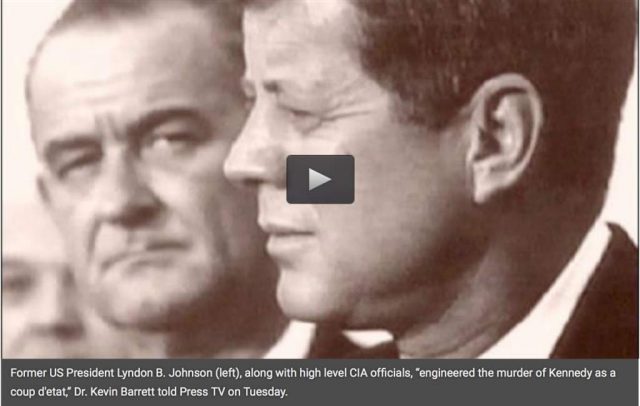 Former US President Lyndon B. Johnson, with the CIA’s assistance, was involved in a “coup d’etat” to assassinate former President John F. Kennedy, an American scholar in Wisconsin says.

Johnson, along with high level CIA officials, “engineered the murder of Kennedy as a coup d’etat,” said Dr. Kevin Barrett, a founding member of the Muslim-Jewish-Christian Alliance.

“This has been established by alternative historians because you can’t publish this in the mainstream [media], you can’t say this in the academic journals,” Barrett told Press TV on Tuesday.

Johnson served as vice president of the United States during the presidency of Kennedy from 1961 to 1963.

He was sworn in as president in Dallas, Texas on November 22, 1963, just 2 hours after JFK was assassinated in Dallas. This was interpreted by some that Johnson was too eager to assume power.

“We know that we had a coup d’etat on November 22, 1963, orchestrated by Vice President Johnson and top level CIA people, with the possible help of organized crime elements linked to the Israeli Mossad,” Barrett said.

Israel also had a motive to kill Kennedy because the president was opposed to the regime’s nuclear weapons program which he believed could instigate a nuclear arms-race in the Middle East, Barrett argued.

However, many researchers are unconvinced by the official government account and argue that Oswald was part of a conspiracy to kill Kennedy, perhaps in connection with Israel, Cuba or the former Soviet Union.