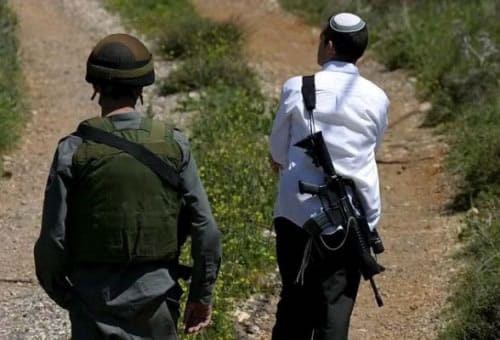 Are Israeli settlers in the West Bank technically speaking civilians? Or should they be regarded as military targets? My understanding of international law is that people have a right to resist occupation. This would not include killing innocent civilians, but do Israeli settlers, morally or legally, fit into that category?

The Israeli government has offered financial incentives in the form of housing subsidies to entice its Jewish citizens to move to the occupied West Bank, and the grants, at least in the past, have been quite substantial. Apparently this has been part of the effort to create “facts on the ground.”

How should we view people who took advantage of such offers, knowingly moving into illegal settlements built in an area internationally recognized as occupied territory? Do we view them as “innocent”?

Another pertinent question is who really rules the roost and calls the shots in the West Bank? Is it the military? Or the settlers? A couple of articles published recently by the International Solidarity Movement would suggest that settlers exercise at least as much authority, if not more so, than the army.

Last Sataurday, after the funeral of a 19-year-old Palestinian youth killed by Israeli forces in the West Bank city of Hebron (referred to as al-Khalil by Palestinians), people gathered in a section of the city for a demonstration. The protest was met by extreme violence from Israeli soldiers as settlers gathered to watch:

The Shamsiyyeh family’s home has long been the target of violence from Israeli settlers who have thrown rocks and other debris as well as poisoning their water tanks on several occasions and even cutting their water pipes on the roof.  Today, settlers again filed onto the family home’s roof to watch the Israeli military assault on Palestinians in Bab al-Zawwiya, some armed with machine guns.

Israeli occupation forces predictably did nothing to calm the situation or remove the settlers from the roof of the family home. One settler sprayed pepper spray from the roof, gassing the family and subsequently himself.  Israeli forces allowed him to leave with the pepper spray without asking a single question.

Just a few hours later, a settler armed with a machine gun, lightly slung around him just like an accessoire, came onto the roof. Soldiers close-by refused to ask the settler to leave from the private Palestinian family home’s roof. The settler then suddenly pointed his machine gun at Palestinians, including small children, on nearby houses roofs. Soldiers at first watched the events unfold only to join the settler on the roof, taking orders from him on what to do.

And here is a video of the incident:

The writer of the article goes on to comment:

In occupied al-Khalil, it has been apparent that settlers rule the military, both through demanding arrests and ID checks of Palestinians and through getting away with any transgression of Palestinian’s human rights by being handed total impunity by the occupying forces.  This is especially disturbing since a West Jerusalem mayor has publicly called for settlers to carry guns amidst a high pressure situation with exploding violence across the occupied Palestinian territories.

Another event, curiously also in Hebron on the same day, though later in the evening, is also worth relating:

The same evening, a group of about 50 settlers, armed with machine guns, surrounded the house of the local activist group Youth Against Settlement, hurling rocks at them. Israeli soldiers that arrived later on, invaded the house, searched every room, then forced everyone present into one room. One by one, everyone was brought out of that room, to be ‘shown’ to a group of settlers. One of the settler women then picked one of the youth out of the group, accusing him of attacking her.

Soldiers arrested the youth and took him to the police station in the illegal settlement of Kiryat Arba, where he was held for three hours before being released. Even though the settler accused him of an attack, she did not file a complaint at the police station, resulting in the release of the young man. Clearly, the accusation was false and not based on any evidence – still, the Palestinian youth was arrested on one settler woman’s accusation. Complaints by Youth Against Settlement members regarding stone-throwing by the settlers was completely ignored by both the Israeli army and the Israeli police.

This is yet another illustration of the total control settlers have over the actions and choices of the army and the police, who will not just follow settlers’ orders, but also condone and enable any of their illegal and violent behavior, be it stone-throwing or attacks on Palestinians.

What the settlers in the West Bank seem to exercise is a “religious authority” that, at least at times, overrides and supersedes the authority of the military. The settler movement is made up by and large of religious Jews who believe not only that they have a unique, divinely-given right to the land, but that to give up any part of it, even a single square centimeter, would be a violation of the commandments of their god of vengeance, whom they refer to as “Ha Shem” (literally “the name”).

This gives the whole conflict we are witnessing now a religious component, and indeed, in the view of writer/musician Gilad Atzmon it has become just that: a full blown religious war. From the Palestinian perspective, defense of the Al Aqsa Mosque has become a religious imperative, just as chosenness and Jewish sovereignty over the West Bank are imperatives from the Jewish perspective:

If the Israeli Palestinian conflict is a religious war then scrutiny of the Old Testament, the Talmud and other Judaic texts may reveal to us what the Jewish State is in its current form and where it is aiming. Armageddon is clearly a valid answer. This is the answer offered by the Jewish settlers who assault Al Aqsa. A state of total war is their mission. Not exactly an ecumenical peaceful empathic world view craving for universal tolerance and reconciliation. For the fanatical Jews who raid the Temple Mount, coexistence is not an option. For them celebration of choseness is the true interpretation of the Judaic call. I wouldn’t argue that this is the only interpretation of Judaism, but this is certainly the Judaic interpretation that shapes the conflict at the moment.

Atzmon goes on to describe Israel as “a cancerous element (that) has destabilized the entire Middle East” and issues a quite reasonable call for its peaceful dissolution. Whether such is possible I do not know. Certainly it is to be hoped for, but in the meantime, the people living under occupation have a right, or a religious duty if you will, to resist the occupiers.

Which brings us back to the question: if Palestinians shoot, stab, or otherwise commit acts of violence against settlers, even if the settlers are unarmed at the time of the attack, are they to be condemned for it? Or are the settlers legitimate military targets?

These are not easy questions to answer. Many of the settlers, men as well as women, are toting machine guns and are convinced that Jewish blood is sacred while holding the view that Gentiles are subhuman. Most of us probably would not shed too many tears upon learning that such people had met with a violent end. But what if, in the process, settler children are killed?

Most morally decent people would agree that deaths of children should be avoided at all costs. Yet in Israel there are people who seem to have no qualms whatsoever about killing children. Five hundred in Gaza last summer alone were slaughtered, and just within the past few days people have been shocked by release of a video showing a critically injured Palestinian boy lying in a pool of blood as shouts ring out calling for his death. You can read an article about the incident here and see the video here. An updated article can also be found here.

The UN Convention on the Prevention and Punishment of the Crime of Genocide gives a five-part definition of the term “genocide” and what exactly constitutes it. A party is guilty of genocide if it commits “any” of the five acts described. In my opinion, as I read the text of the law, Israel is guilty of four out of the five.

If, as Atzmon contends, we are watching a religious war unfold, then a question we need to ask ourselves is how many of the protagonists in this conflict hold the carrying out of genocide as part of their religious duty? Maybe the Old Testament can shed some light on that:

Now go, attack the Amalekites and totally destroy all that belongs to them. Do not spare them; put to death men and women, children and infants, cattle and sheep, camels and donkeys.’”
–I Samuel 15:3

It’s easy for us here in the West to sit back and condemn Palestinians for stabbing Israelis with screwdrivers, but few of us are facing a situation in which an organized group actively seeks to commit genocide against us. And the state of affairs in Occupied Palestine is complicated by the fact that those maintaining the occupation, and who go about committing acts “with intent to destroy, in whole or in part, a national, ethnical, racial or religious group,” are wholly convinced that rather than the Palestinians it is they themselves who are the victims.

Sixty seven years ago when the state of Israel was founded it was felt that by having a state of their own, Jews would find peace, amity with the rest of humanity, and validation of themselves as a people. Lots of people the world over felt compassion for Jews at the time, and truly wanted to see the Jewish state take its place among the civilized family of nations. It obviously hasn’t worked out that way, and as a result the compassion is running out.

Meanwhile the casualties continue to pile up: three Israelis are said to have been killed on Oct. 13, while more than 400 Palestinians were injured, at least 31 of them shot with live fire.