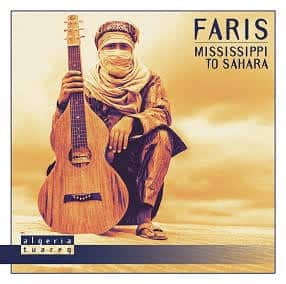 Guitarist FARIS, (who turned Blues classics into Tuareg style) was the opening act for Eric Bibb & Jean-Jacques at L’ Alhambra Théatre in Paris.

Christo Lynn, a guitarist in Paris,known as “the Blues Man”, founder of the Church of Blues and I attended this concert thanks to the invitation from his press agent, Yazid Manou. Christo has played with many famous guitarists including Mickey Finn and Hank Williams Jr.

Faris played to a full house who enjoyed his performance.

Faris has performed in several countries:

“this is the most amazing movement to happen with this great music! The welcome return home to Africa!Faris is amazing! And he is playing a Wiessenborne square neck guitar!“

Here is what Ben Harper said about Faris :

“Mississippi To Sahara is a great record. I love it, and I love how it sounds. I can only imagine the wonderful songs to come from Faris in the future”.

According to Christo Lynn, Faris’ Blues brought out an Oriental style.

We both enjoyed him playing slide and would have liked to have heard him play accompanied by his band.

His latest recording “Mississippi to Saharra” is available now.

It was a very enjoyable evening.