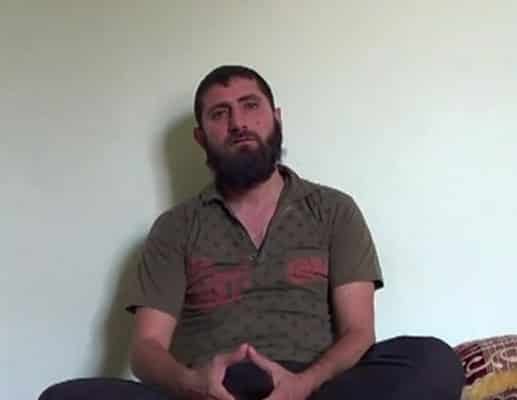 TEHRAN (FNA)- A former Syrian Army officer that defected to the Free Syrian Army (FSA) in Dara’a province in 2012 has returned to Damascus after completing his three-year long espionage mission for the Syrian Military Intelligence.

The Army officer, Lieutenant Hussein Al-Ahmad of Lattakia City, was originally captured by the Free Syrian Army in 2012 – he became famous for publicly defecting to the aforementioned rebel group following his capture; this led to Lt. Ahmad’s acceptance among his fellow defectors.

Lt. Ahmad would participate in a number of battles in 2014, including the rebel victory at Tal Al-Harrah in the Western parts of Dara’a province; this prompted the Free Syrian Army’s Central Command to appoint him as commander of Dara’a tribes.

Lt. Ahmad conducting an interview with Al-Jazeera as an FSA commander

Unbeknownst to the Free Syrian Army’s Central Command, Lt. Ahmad was actively communicating with the Syrian Air Force Intelligence in Damascus and providing them with specific locations of rebel military installations and rebel military intelligence.

Lt. Ahmad in an interview with Al-Jazeera as a commander of FSA

Three days ago, Lt. Ahmad abandoned his new post in West Ghouta in Damascus province and returned to the Syrian capital, where he was greeted warmly by his peers after his three-year-long mission.

When Lt. Ahmad entered Damascus, he was seen driving a vehicle fitted with a heavy machine gun – he also possessed important rebel documents that were handed to the AFI upon his arrival.

Treated as a hero in Damascus, a number of Syrian news outlets have already ran his perilous journey through the rebel ranks and his experience with the Syrian Opposition.

Lt. Ahmad’s espionage mission proved invaluable to the Syrian Armed Forces protecting the provincial capital of Dara’a, as they were provided with vital detailed intel about offensives and those participating in the attacks.