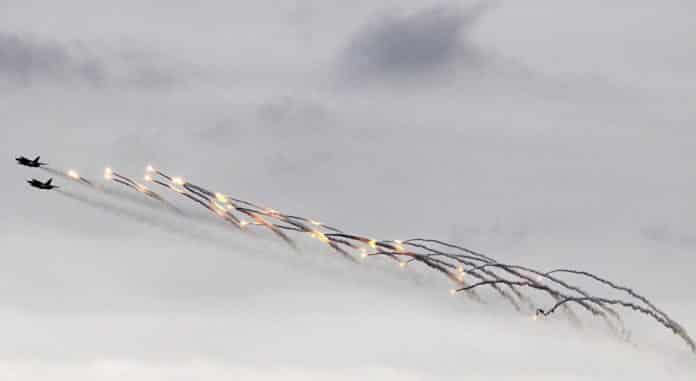 The Russian Aerospace Force has conducted 36 sorties over the past 24 hours, hitting 49 ISIL targets in the Syrian provinces of Hama, Idlib, Latakia, Damascus, Aleppo, the Russian Defense Ministry said on Saturday. As a result, 11 ISIL command and operation centers have been destroyed.

Russian Su-25 attack aircraft take off from the Khmeimim airbase in Syria. © Dmitriy Vinogradov / RIA Novosti
Russian warplanes have bombed a training camp in Syria where foreign instructors trained potential suicide bombers, the Russian defense ministry said. It was one of 49 terrorist targets hit by the Russian Air Forces over the day.

“Not far from Salma in Latakia province, a Su-24M bomber delivered a strike at a building, which was used as a terrorist training ground. According to intelligence, there were ISIL foreign instructors, who were training people, including suicide bombers, for guerrilla warfare in areas liberated by the Syrian army,” ministry spokesman Maj. Gen. Igor Konashenkov said.

He added that the facility had its own explosives workshop, which was also destroyed by an airstrike.

The general said that the terrorist group Islamic State (IS, formerly known as ISIS/ISIL), which suffered serious damage from Russian bombings, is working to rebuild its infrastructure.

“The militants’ new tactics is to spread their supply and command facilities, but it does not work. All their new infrastructure objects are being identified and destroyed,” he said.

Konashenkov said the civilian population in the areas under terrorist group’s control are aiding the Russian airstrikes by providing intelligence about IS to the Syrian government.

“This information is double-checked by our aviation group with various technical means of reconnaissance. Following this, a decision is made on which objects we should target,” he said.

Russia is providing air support to Syrian government troops, which are currently undertaking an offensive to retake villages and cities captured by terrorist groups. Moscow says its goal is to stabilize the situation in the country enough to allow political dialogue between Damascus and moderate opposition to start.

“All Russian planes returned to the Hmeimim aerodrome after performing combat missions. Also, I want to emphasize that Russian drones over Syria continue to monitor the situation,” Maj. Gen. Igor Konashenkov said.

The Russian Aerospace Force has destroyed a terrorist camp where foreign instructors had trained suicide bombers in the Latakia province. The facility also housed a workshop for manufacturing improvised explosive devices.

“Near Salma in the Latakia province Su-24M bomber hit a separate building, which housed a base for training terrorists. According to intelligence data, foreign instructors trained ISIL militants there to conduct diversionary war in areas liberated by the Syrian army, as well as [trained] suicide-bombers.”

He added that the terrorists were also taught to be legalized among civilian population and refugees.

Russian combat aircraft have hit and destroyed a command center responsible for terrorist attacks in the Syria’s provinces of Homs and Damascus, according to the Syrian intelligence, the Russian general said.

“The new tactic of the militants to spread out munition warehouses and command centers of the group is not bringing effective results. All reconstructed objects of the ISIL terrorist infrastructure are efficiently identified and destroyed,” Konashenkov said.

After the missions were over, all the Russian aircraft returned to the base aerodrome, drones continue monitoring the situation

“In the Homs Province was destroyed an ammunition depot,” he said. “The air strike was launched at the moment, where another portion of mortar shells and cartridges was delivered. After the strike, the ammunition began to detonate. Three trucks were destroyed at the facility.”

In Aleppo, Su-25 destroyed shelters and several tanks and armoured vehicles, belonging to the terrorists of Islamic State.

“The data received from a drone proves destroyed IS two tanks and five infantry fighting vehicles,” the spokesman said.

“After the missions were over, all the Russian aircraft returned to the base aerodrome,” he said. “Russian drones continue monitoring the situation.”

“I would like to say specifically, much assistance comes from the people living in regions, which are controlled temporarily by the militants, as they inform the Syrian reconnaissance about terrorists,” he said. “As the Russian commanders receive this information, they verify it and only later on make decisions on destroying of facilities mentioned.”

The spokesman said near Salma (Latakia Province) “bomber Su-24M made a pinpoint strike on a separate building, where the terrorists had their base.”

“There foreign instructors trained IS militants for subversive war in regions liberated by the Syrian army, and also trained suicide terrorists,” he said.

The instructors taught students how to legalise themselves among civilians and refugees.

“The building had a special shop, where the terrorists produced explosive devices,” the spokesman said. “An air bomb destroyed the building completely.”

Over the past 24 hours, the Russian air-space grouping made 39 flights targeting 49 facilities of the terrorists in Syria, the defence ministry’s representative said.

“The new tactics of the militants to decentralise ammunition depots and control centres does not bring positive results – all newly organised facilities of the IS terrorist organisation are found and destroyed without delay,” he said.

Russia’s air and space force started dealing daytime pinpoint strikes against facilities of the Islamic State terrorist group, outlawed in Russia, on September 30. The air group in Syria incorporates more than 50 planes and helicopters, including Sukhoi-24M, Sukhoi-25, and multi-functional Sukhoi-34.