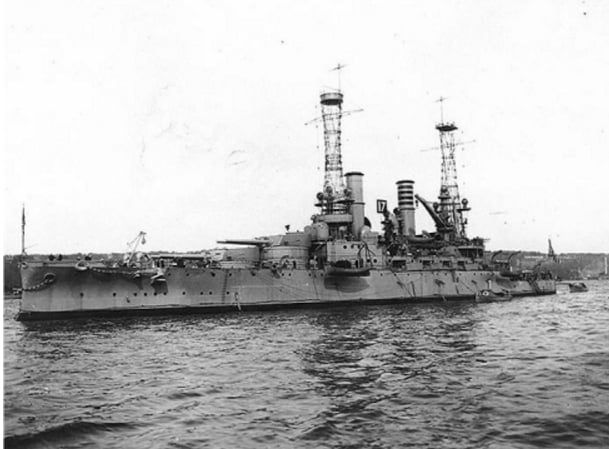 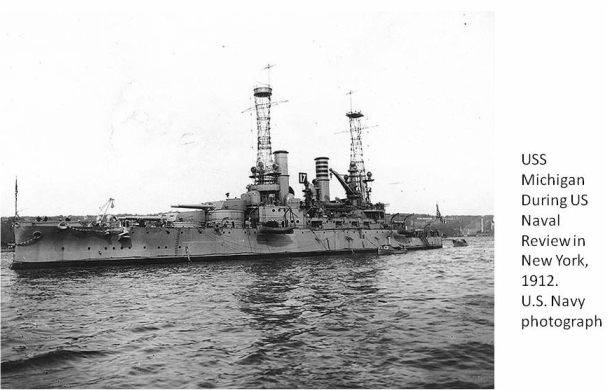 The story of the U.S.S. Michigan begins in Erie, Pennsylvania. On her launch day, December 5, 1843, the Navy gunboat U.S.S. Michigan became stuck on the ways in the harbor at Erie. Most of the Erie populace had gathered to see her go straight to the bottom. They knew she would sink because she was a first in the shipbuilding industry of the 1800s- she was made of Swedish wrought iron.

The United States Navy had become painfully aware of the fact that a new kind of ship was needed during the Canadian Rebellion of 1837. Attacks on Canada from the United States by bands of rebels (or patriots, depending on which side of the lake you favored) motivated the British government to build two steam gunboats to defend the Canadian side of the Great Lakes.

Understandably, the United States didn’t like the idea of a gunboat on the Great Lakes. The British move was so unpopular that Secretary of State Daniel Webster sent a protest to the British Minister in Washington.

The British reply bristled. “It being unfortunately notorious that her Majesty’s provinces are threatened with hostile incursions by combinations of armed men, unlawfully organized and prepared for war within the frontiers of the U.S. and it being found by experience that the efforts of the United States government to suppress those unlawful combinations are not attended with the wishes for success, the vessels are obviously necessary to protect Canada.”

The USS Michigan is Built at Pittsburgh, Cleveland, and Erie

This reply did not turn away the wrath of Mr. Daniel Webster of the United States. In 1841, Congress earmarked $100,000 for the construction of armed vessels on Lake Erie. The Michigan’s construction proceeded slowly in 1842 and1843. She was designed by naval constructor Samuel Hart and built in sections at Pittsburgh. Contractors were Stackhouse and Tomilinson and her specifications were drawn according to an agreement between the United States and Canada. Many of the ship workers who helped build her sections were also positive her wrought iron hull would sink her.

The Michigan’s engines were another dubious first and radical departure from the tried and true. She carried two direct acting condensing steam engines, later placed side by side. The cylinders were 36 inches in diameter with an eight foot stroke. She had two iron boilers that were to last for 50 years. The various sections of the U.S.S. Michigan were built in Pittsburgh and made ready for assembling. Then they were sent to Cleveland for additional work and transported back to Erie overland through the forest by ox teams.

Read more at:  http://magicmastsandsturdyships.weebly.com/the-uss-michigan—the-first-iron-ship-of-her-age.html
ATTENTION READERS
Due to the nature of independent content, VT cannot guarantee content validity.
We ask you to Read Our Content Policy so a clear comprehension of VT's independent non-censored media is understood and given its proper place in the world of news, opinion and media.