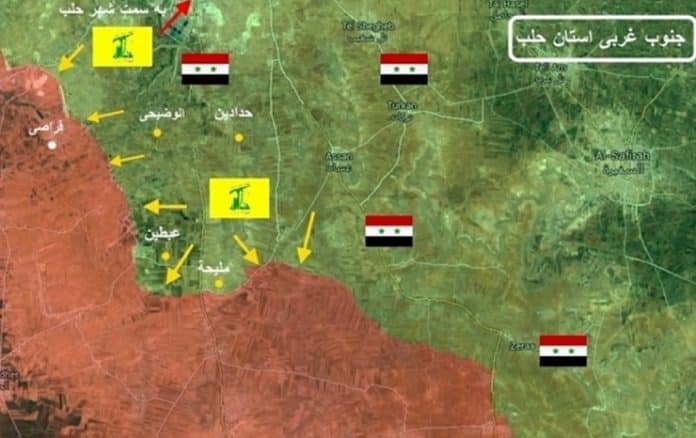 TEHRAN (FNA)- A commander of Syria’s National Defense Forces elaborated on the objectives of the large-scale army operations in Aleppo, and explained the latest gains made by pro-government forces in the strategically important province, including the latest conditions of the besieged Kuweires military airbase.

“The goal of these operations is to purge these regions of terrorists and continue advances towards the Lattakia province; if these operations succeed, the route connecting the terrorist groups in Aleppo to Lattakia and Idlib provinces will be cut off and supply of aids to them through the Turkish border will grow fully impossible,” the Syrian field commander, who spoke on the condition of anonymity for security reasons, told FNA on Monday.

Another goal of the operation is Kuweires airbase. The Syrian forces backed by Hezbollah forces have started operations in the Eastern countryside of Aleppo since two years ago in a bid to break the siege of Kuweires military airbase.

Hundreds of Syrian forces have been fully besieged at the Kuweires airport as a result of the occupation of vast areas surrounding the airport by the terrorists in the past two years.

The Syrian army troops advanced towards Kuweires airbase, and are now only less than 6 kilometers away from the besieged airport as mentioned above.

On Sunday, battlefield sources said that the Syrian armed forces, backed by the Russian warplanes, were pushing back the Takfiri terrorists from areas adjacent to the Kuweires military airport.

The march towards the strategic airbase started on Saturday. Following a series of battles, sources said yesterday that “the army had inflicted heavy casualties on the militants in areas near the Kuweires airport, killed tens of the terrorists and wounded dozens more”.

The Russian warplanes launched heavy airstrikes on ISIL positions in Al-Jaboul village to open the path for the Syrian ground forces to win back the village.

The Syrian troops killed dozens of the militants and took full control of the village which is close to the Kuweires military airbase.

The ISIL Takfiri terrorists have besieged the Kuweires airport for over 2.5 years now, but the airport itself is under the Syrian army’s control.

The Syrian army’s helicopters supply foodstuff and other needs to the Syrian troops defending the airport.

As seen in the above map, the Syrian army and Hezbollah should go through regions that are under ISIL occupation from both sides before they can shake hands with their comrades and friends in Kuweires military airbase; and this has resulted in their inch-by-inch advance towards the rendezvous point.

The Syrian army backed by resistance forces continued their advance in Southwestern Aleppo province and managed to capture the strategic Senobarat hilltops located to the Northwest of Al-Vazihi village; Senobarat hilltops overlook movements in areas under terrorists’ control, including Qarasi town.

On the other hand, the Syrian army and resistance forces backed by Russian fighter jets managed to purge Tal Qabli hilltops and al-Jaberia village of terrorists at midnight on Sunday.

Also on Sunday, the Syrian army and the resistance forces in their house-to-house search managed to arrest 10 terrorists who had hidden in several houses.

The Syrian army and resistance forces have also been making continued gains in the Eastern countryside of Aleppo since Sunday midnight and managed to seize Tal Naqmous hilltops and Tal Sab’een village as well as the town of al-Moflesa. The Syrian forces are currently fortifying their positions in the newly-purged areas.

The Syrian forces also managed to seize the towns of al-Nasseriya, al-Howeija and al-Boqja on Sunday.

Militant groups in the province of Lattakia acknowledged on Tuesday that three of their senior commanders have been killed in clashes with the Syrian army.

The terrorist groups said on their social media pages that Kafi Fahd and Abu Libia from the so-called “Asifet al-Hazm Battalion” and the leader of “Sayyed al-Shuhadaa Hamzeh Battalion”, nicknamed as Abu Hamza, were killed during clashes in the Northern countryside of Lattakia.

Earlier reports said the Russian fighter jets’ air raids on the terrorist positions across the coastal province of Lattakia left at least 40 militants dead, including Basel Zimmo (Abu Hamza) a senior commander known as the King of US TOW antitank missiles.

The Russian warplanes, on Monday midnight and early hours of Tuesday, targeted the hideout of the militant commanders in Jabal al-Akrad area in several missile attacks in which, at least 40, terrorists were killed and many others were injured.

Abu Hamza, a defected captain and Chief of Staff of Coastal Division, was trained by the US forces in Turkey to operate the US-made antitank missiles against the government forces in Syria.

Zimmo targeted many army tanks in Syria by TOW missiles and trained many militants to work with the TOW missiles.

On Sunday, the Syrian fighter jets bombed several headquarters, concentration centers, and vehicles of the terrorists in Qaraqfi mountain, North of Salma, Marj Khokha and Tertiah in the Northern countryside of Lattakia.

Scores of terrorists were killed in the air raids. A number of the militants’ hideouts and machinegun-equipped vehicles were also destroyed.