Home Government Putin: No need to distinguish between ‘moderate’ and ‘other’ terrorists 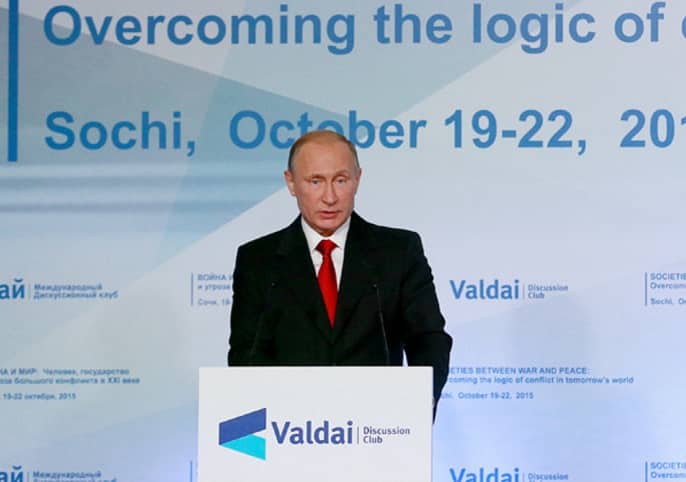 President Vladimir Putin speaking at the closing plenary session of the International Valdai Discussion Club’s 12th annual meeting in Sochi, October 22, 2015. © Anton Denisov / RIA Novosti
There can be no “moderate” terrorists, President Putin said, speaking about the situation in the Middle East at the Valdai discussion forum.
“Why play with words dividing terrorists into moderate and not moderate. What’s the difference?” Putin told the forum.

A whole “snarl” of terrorist groups act in the region, who fight also against each other for “sources of income” and not for ideology, Putin said, adding that the weapons provided to “moderate” opposition in the region had ended up in the hands of terrorists.

Some countries are playing a double game, the Russian president said, adding that while they fight against terrorism they also “place figures on the board” in their own interests.

“Success in fighting terrorists cannot be reached if using some of them as a battering ram to overthrow disliked regimes,” Putin told the forum, saying that this way the terrorists would not go anywhere. “It’s just an illusion that they can be dealt with [later], removed from power and somehow negotiated with,” he added.

Saying that the efforts of the Russian military in Syria will positively affect the situation in the country, helping to provide conditions for political settlement, the Russian president also stressed that defeating terrorists will not solve all the problems in Syria.

“I’d like to stress once again that [Russia’s operation in Syria] is completely legitimate, and its only aim is to aid in establishing peace,” the Russian president said in Sochi, adding that the decision to deploy the Air Force was made following a request from the Syrian government.

Moscow has been seeking to exchange data about the positions of Islamic State militants in Syria with western countries for weeks, and now such cooperation is close, Putin said.

Countries should perceive one another as “allies in a common fight, and act honestly and openly,” Putin said, adding that only in this way can victory against terror be guaranteed. “Syria… can become a model for partners… of how to solve problems that affect everyone.”

The main task is “not to let terrorists move their activity into other regions,” the Russian president said, adding that to prevent such an outcome all forces in Syria and Iraq, including state armies, Kurdish militia and various opposition groups, should be united.

US ‘deceived’ the world about Iran’s nuclear program
The “hypothetical nuclear threat” allegedly posed by Iran has never existed, the Russian leader told the Valdai Discussion Club. Washington was just trying to “destroy the strategical balance,” Putin said, adding that the US aimed “not to just dominate, but be able to dictate its will to everyone – not only geopolitical opponents, but also allies.”

Russia and the whole world have been “misinformed” and even “deceived” by the US regarding Iran’s suggested nuclear threat, Putin said. Even after Tehran has agreed with the world on the peaceful nature of its uranium enrichment program, missile defense systems are still being tested by Washington far away from its borders – now in Europe.

“We had the right to expect that work on development of US missile defense system would stop. But nothing like it happened, and it continues,” Putin said, adding that the international security system has been destroyed under the pretext of the Iranian “threat.”

There is a possibility that US anti-missile shield bases in Eastern Europe might be used for offensive weapons, the president said, adding that it may be regarded as a threat to Russia. A dialogue on limitation of strategic nuclear forces should be continued, Putin added.

“This is a very dangerous scenario, harmful for all, including the United States itself,” the Russian president told the forum. “The deterrent of nuclear weapons has started to lose its value, and some have even got the illusion that a real victory of one of the sides can be achieved in a global conflict, without irreversible consequences for the winner itself – if there is a winner at all,” Putin said.

There can be no winner in conflicts involving nuclear weapons, the Russian leader said.

Trade and sanctions wars show “unfair competition” on the US side, the Russian president said, commenting on current political and economic relations in the world. Moral norms should be considered in international, political, military and economic rivalry, Putin said, adding that otherwise the competition could get out of control.

“Russia could also declare the necessity to democratize the USA, but that would, at a minimum, be impolite,” Putin told the discussion forum.

Formation of economic blocs based on conspiratorial principles will not make the world a safer place, but rather produce a basis for future conflicts, the President said. Pointing out that European companies have also suffered from sanctions the US has imposed on other nations, he concluded that these kinds of measures taken by Washington demonstrate that it treats other countries “like vassals who are being punished, rather than allies.”