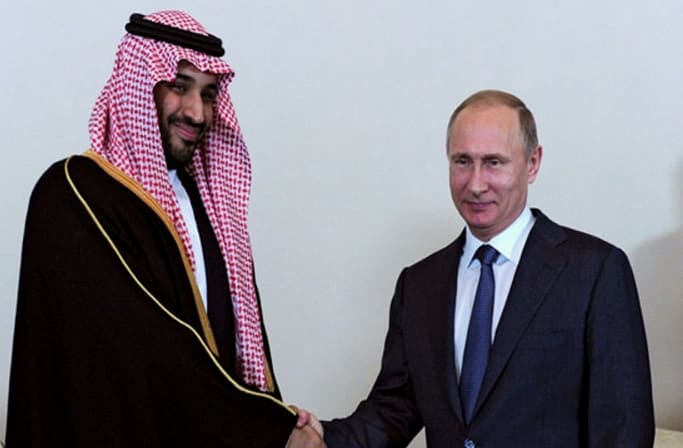 The Saudi deputy crown prince gave his proposal to President Putin in a meeting in Moscow on June 19, the Arabic-language Al-Akhbar newspaper wrote.

It was revealed two weeks ago that Saudi Arabia and Jordan had planned to conduct a blitz on the capital Damascus through the Southern provinces of Daraa and Quneitra after coordinating with the Saudi-backed terrorist Leader Zahran Aloush who is in Eastern Ghouta, the newspaper added.

The Russians who had been informed of Saudi Arabia’s plan and after checking with the Lebanese Hezbollah resistance movement’s field information, the Russian fighter jets changed their direction from the North to Southern Syria and pounded the terrorists’ positions in Jobar and Eastern Ghouta of the Damascus countryside, specially the towns of Marj al-Sultan and Deir al-Asafir, it said.

Al-Akhbar wrote that the Russian airstrikes resulted in the destruction of terrorists’ command centers and foiling the terrorists’ attempt to capture Damascus.

The Syrian army also carried out attacks on the strategic hilltop of Tal al-Alaqiya in Daraa countryside and managed to fully destroy the terrorists’ positions in the region. The Tal al-Alaqiya hilltop is surrounded by three other strategic areas of Deir al-Adas, Kafar Nasej and Kafar Shams in Northern Daraa.

Political observers believe that he Russian fighter jets’ attacks have an important message for Israel while Tal Aviv is trying to pretend that it has reached an agreement with Moscow on Syria’s Southern skies. Also on Monday, Russian fighter jets razed to the ground a number of the positions of the terrorist groups in the Syrian Province of Aleppo.

The Russian air raids also hit positions of terrorists from The Levant Front or Jabhat al-Shamiyya in al-Sheikh Saeed neighborhood in Southern Aleppo and al-Sheikh Issa in the Southern countryside of Aleppo.

Russian warplanes also pounded Takfiri militants’ positions in the vicinity of the Air Force Academy in Kuweires airport in the Eastern countryside of Aleppo.