…and editor of We Are Not Charlie Hebdo: Free Thinkers Question the French 9/11

21st Century Wire just ran a terrific exposé on the French “satirical” magazine Charlie Hebdo and its unfunny cartoons mocking the victims of the Russian air disaster in Egypt:

“It’s important for people to remember that before last January’s GLADIO-style false flag,  the religious-baiting staged ‘terror’ attack on Charlie Hebdo, the French magazine was hugely unpopular. France’s once revered ‘satirical institution’ began losing money fast due to its plummeting subscriber base. Things were so bad that subscriptions had fallen well below 20,000. In other words, the magazine was so bad that you could hardly give it away. Here’s just the latest example of why…

“Desperate to score some cheap points off the back of an international tragedy, they ran a new ‘cartoon’, this time poking fun at the 227 deceased Russian passengers and crew on board Metro Airlines Flight 7K9268 which crashed last week in the Sinai Peninsula in Egypt.

“It seems that the sad middle-aged, alcoholic Lotharios at Charlie Hebdo weren’t satisfied with all the unwarranted attention they received this year on the back of the fake Islamic terror event, and as well receiving a $1.2 million bailout from the French government.

“Just as they did last January, the magazine has been once again used as a tool – as a geopolitical agent provocateur. If you haven’t figured this out by now, this latest PR stunt should leave little doubt that the publication is part of a NATO media operation…” 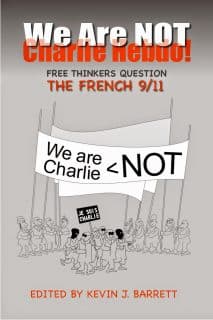 In the groundbreaking book We Are Not Charlie Hebdo: Free Thinkers Question the French 9/11 my 21 colleagues and I did a pretty good job of exposing the lies, deceit, manipulation, bad faith and chicanery surrounding last January’s PR stunt in Paris. But we did leave one thing out: None of us offered a deep, thoughtful analysis of why Charlie Hebdo’s approach to humor and satire is so morally and esthetically bankrupt.

To do that, one might turn to the work of  French philosopher-anthropologist René Girard, who passed away last Wednesday.

“Girard was interested in the causes of conflict and violence and the role of imitation in human behavior. Our desires, he wrote, are not our own; we want what others want. These duplicated desires lead to rivalry and violence. He argued that human conflict was not caused by our differences, but rather by our sameness. Individuals and societies offload blame and culpability onto an outsider, a scapegoat, whose elimination reconciles antagonists and restores unity.”

Check out my conversations about Girard with scholar Tom Breidenbach here, here, and here.

The moral implications of Girard’s discoveries are profound. To boil it down to the simplest possible terms, the starkest bottom-line moral choice we are faced with throughout our lives is:

William S. Burroughs offers an amusing description of a man who chooses the latter:

“Somewhere in the shadow  of the Titanic disaster slings a cur in human shape, today the most despicable human  being in all the world. In that grim midnight hour he found himself hemmed in by the  band of heroes who watchword rang out across the deep – ‘women and children first.’  What did he do? He scuttled to the stateroom deck put on a women’s skirt, a women’s  hat and a women’s vale and picking his crafty way he filled a seat in one of the lifeboats  and saved his skin. His identity is not yet known though it will in good time. This man  still lives – surely he was born and saved to set for men a new standard by with to  measure infamy and shame.”

Indeed, this man still lives. His name is Larry Silverstein – who avoided death on 9/11 by failing to show up for his customary breakfast at Windows to the World restaurant atop the North Tower, claiming later that his wife reminded him of a nearly-forgotten appointment with his dermatologist. Silverstein is a man who walked away from the murder of 3,000 people with billions of dollars in his pockets.

Today, it is truthful, not anti-Semitic, to point out that a band of powerful atheist Jews, the neoconservatives, has decided that it is time for the Jews, those perennial sacrificial scapegoating victims, to start sacrificing others to save themselves and their Zionist entity…and to do so “by any means necessary,” up to and including mass human sacrifices like 9/11 and Charlie Hebdo. (Naturally the vast majority of Jews does not agree; but by its silence, its reluctance to follow W.C. Fields’ advice and “take the bull by the tail and look the facts in the face,” that majority participates in the crime.)

René Girard points out that in non-monotheistic mythology, killing the other to save and exalt the self is heroic. It is what heroes do.

Then along comes monotheism, and suddenly the hero is the oppressed, truth-telling underdog, i.e. the sacrificial victim. For Girard, this culminates in the sacrifice of Jesus.

Now that monotheism has had its word, there are two kinds of people in this world: Those who embrace the anti-sacrificial morality that monotheism brought (many of whom do not consider themselves monotheistic or even religious); and those who do not.

The Charlie Hebdo “satirists” are morally and esthetically as well as financially bankrupt because they have no sympathy for sacrificial victims, be they the humiliated, oppressed and “othered” French Muslims, or the butchered Russian air passengers. On the contrary, they gleefully participate in the torture and human sacrifice of the weak, powerless and oppressed. 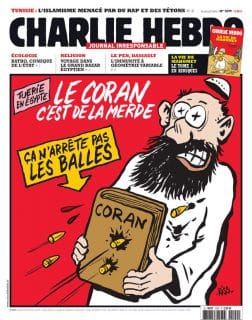 The legend reads: “Killing in Egypt: The Qur’an is shit, it doesn’t stop bullets.”

This cartoon mocks the murder of thousands of peaceful pro-democracy demonstrators in Egypt. These demonstrators were demanding the return of Egypt’s first and only democratically-elected leader in its 5,000-year history, President Mohammed Morsi, who is supported by the poor, weak, pious segment of the population (which collectively constitutes a large majority).

Morsi was removed from power in what amounts to a human sacrifice – a sacrifice not just of Morsi himself, but of democracy and monotheistic morality. The rich, powerful, corrupt, selfish, amoral and vicious segment of the population – the ruling elite – orchestrated a media campaign demonizing Morsi and “othering” him and his followers so they could be rendered sacrificial victims.

And Charlie Hebdo was there, torturing and mocking the victims and cheering on the sacrifice.

The people who think Charlie Hebdo is funny are not-quite-grown-up versions of those kids who think it is funny to torture small, helpless animals.

They are the people who think it is funny to climb Israeli hilltops and watch children being blown to bits in Gaza.