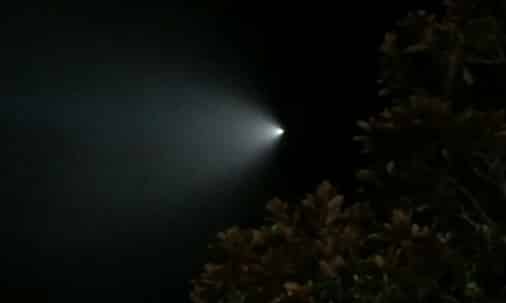 The US Navy has confirmed that the mysterious “meteor” was a scheduled Trident II ballistic missile test flight. Cmdr. Ryan Perry of the Navy’s Third Fleet said in a statement that the rocket was launched from the Kentucky Ohio-class submarine in the Pacific Test Range off the coast of Southern California.

The test range in question is a large area off Point Mugu, Ventura County, northwest of Los Angeles. The Navy does not usually issue warnings or disclose the nature of their activities ahead of such tests, the spokesman said.
There was, however, a forced diversion of nighttime flights from Los Angeles Airport – the second-busiest in the US – due to unspecified “activated airspace” in the area, Reuters reported.

Initial media reports did suggest that the object was in fact of earthly origin. The Orange County Sheriff’s Department tweeted that “Light seen in OC sky was confirmed through JWA [John Wayne Airport] tower to be a Naval test fire off the coast. No further details.”

Furthermore, Los Angeles County Lost Hills Station issued a traffic alert saying that “lights and lasers can be seen from beach and coastline” due to “military exercises off of Catalina Island.”

This didn’t stop experts from suggesting that the object might have been a comet or a meteor. An astronomer at Griffith Observatory told local broadcaster ABC7 that the phenomenon could be considered “normal” – and could be a “comet”passing as a precursor to the Taurid meteor shower, which is peaking this week.
The alerts were also all too late for the majority of observers, whose reaction, captured on dozens and dozens of devices, ranged from surprise and amusement to sheer terror.

“Oh my God! It looks like a UFO! What is going on?!” cried a frightened female observer in a clip posted by @sav_hilde on Twitter.

“It look like a planet opening up the sky or some… this is like zombie apocalypse,” commented a man in a video published on YouTube channel Jet 2.

While another witness was quick to nail the nature of the event saying “This is Donald Trump!”

Watch the longest video of the ‘LA UFO’ taken by Julien Solomita:
ATTENTION READERS
Due to the nature of independent content, VT cannot guarantee content validity.
We ask you to Read Our Content Policy so a clear comprehension of VT's independent non-censored media is understood and given its proper place in the world of news, opinion and media.