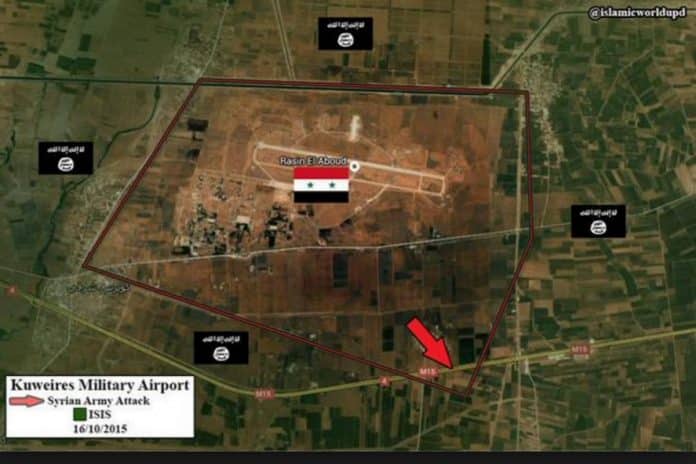 At first, America claimed Kuweires Airbase had fallen to the Free Syrian Army.  That wasn’t true, but the base was surrounded by forces of Jabat al Nusra, the al Qaeda franchise supported by the likes of John McCain and the “Fox News Fatass Generals.”
To members of congress, this base, first its imaginary fall and later, the siege that was lifted minutes ago, were the only rationale for supporting “moderate terrorists” that had fought no better than the trained monkeys the US had recruited in its several failed programs.
Yes, you hear it right, the latest failed Turkey program is only one of many, there is the massive and totally failed CIA program from Jordan and, oh yes, the programs in Iraq and Afghanistan that didn’t cost $500 million but $1.5 trillion.
____________
… from Fars News Agency, Tehran
TEHRAN (FNA) – The Syrian army, popular forces and Hezbollah forces, backed up by Russian air force, lifted the two and half-year-long siege of Kuweires military airport after killing hundreds of ISIL terrorists on Tuesday, as some unconfirmed reports said the offensive was led by Iran’s famous Commander Major General Qassem Soleimani.

The Syrian troops and Hezbollah forces rolled into the Kuweires airport at the end of their daylong last phase of massive operations. Heavy clashes were underway around the Kuweires airport since early this morning and the Syrian army was defusing ISIL’s minefield before they could reach their friends in the base.

There are unconfirmed reports from the battlefield about witnessing Iran’s Major General Qassem Soleimani leading the battle.

Sources from both sides of the war said General Soleimani was the top field commander and has been leading the CentCom of the Syrian army-NDF-Hezbollah at least for the last two days. FNA is unable to confirm or reject these reports independently.

The Syrian army, the National Defense Forces (NDF) and Hezbollah combatants, backed up by Russian warplanes, launched the last round of their over one-month-long joint operations against the ISIL terrorists’ positions in Eastern Aleppo near the Kuweires airbase this morning, and won full control over the strategic Aleppo-Raqqa Highway.

In addition to the Syrian and Russian airstrikes, the artillery and mortar units of the army also shelled the ISIL strongholds to weaken their defense lines as much as possible to lay the ground for the combatants of Hezbollah, the army soldiers and the National Defense Forces to launch the final phase of their joint operations to lift the nearly 2.5-year-long siege on Kuweires airbase.

Intelligence sources said hundreds of ISIL militants were fleeing the Kuweires region to safer areas to save their lives after suffering heavy casualties in the joint massive attack of the Syrian Army and Hezbollah with the Russian air backup.

After cleaning the region, the pro-government troops had to defuse a minefield planted by the ISIL before they could reach the gates of airbase.

The ISIL Takfiri terrorists have besieged the Kuweires airbase for over 2.5 years now, but the base itself is under the Syrian army’s control.

Hundreds of Syrian forces are under a tight siege at the airbase as a result of the occupation of vast areas surrounding the airport by the terrorists. The Syrian army’s helicopters supply foodstuff and other needs to the Syrian troops defending the airport.