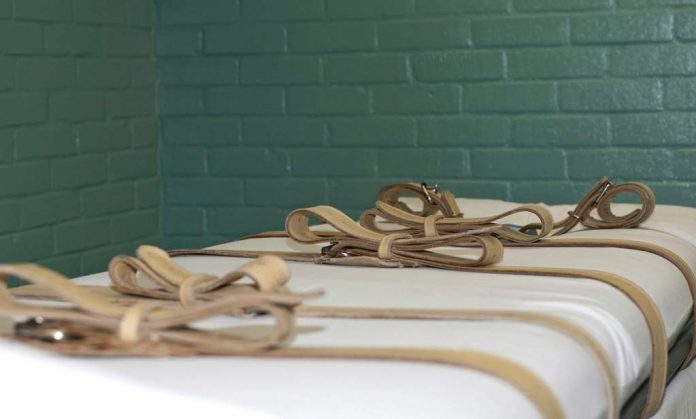 Lauren Gambino UK Guardian
‘The government shouldn’t be taking the life of people who spent part of their life serving the government and were wounded mentally in that process,’ said Richard Dieter, the report’s author.

For a fleeting moment in 2009, James Davis was a wounded war veteran belatedly receiving his Purple Heart four decades after he fought in Vietnam. But after the medal was pinned, it was removed, his shackles were snapped back on, and he was escorted back to his cell on death row, where he remains to this day.

One spring day in 1995, Davis had walked into a tool company in Asheville, North Carolina, and opened fire. With a rain of bullets, Davis killed three people, including two of his bosses who had fired him earlier that week.

As his murder trial progressed, testimony showed that Davis was mentally ill, that he suffered from post-traumatic stress disorder, and that he had been abused as a child. But this was not raised until late in his trial, a misstep that advocates say led to Davis’s death sentence.

Davis is one of hundreds former service members condemned to death at the hands of a government they risked their lives to protect and serve, according to a report, Battle Scars: Military Veterans and the Death Penalty, published by the Death Penalty Information Center on Tuesday.

“The government shouldn’t be taking the life of people who spent part of their life serving the government and were wounded mentally in that process,” said Richard Dieter, the center’s senior program director and the author of the report. “Their service should exclude them from being treated as the ‘worst of the worst’. It’s a mitigating factor, the same as age or disability might remove them from part of the death penalty. It’s an exemption from part of the punishment, certainly not all of it.”

As the US prepares to honor its citizens who have served in the armed forces on 11 November, Dieter said he hopes the report will act as a “wake-up call” for the criminal justice system and the American public, warning them that they have failed a small but significant population of veterans.

Though the exact number of veterans on death row is not known, the report estimates, based on a variety of surveys, that at least 10% of the condemned population in the US, at least 300 inmates, had prior military service – and more have already been executed.

“In a country that is proud of its renewed respect for veterans, and that is using the death penalty for a dwindling number of offenders, capital punishment stands out as a questionable punishment for those who have served in the military …” he wrote in the report. “The country owes its veterans a thorough examination of the use of the death penalty in their cases, even when their offenses are especially grievous.”

Military service is often overlooked, discounted or presented as an aggravating factor in capital cases.
Decades of studies on former servicemen and women have established ties between combat in war zones and increased rates of unemployment, substance abuse, domestic violence, homelessness and criminality.

The report includes several recommendations for keeping veterans off death row, including “mental health assessments for capitally charged veterans by professionals with experience in military health issues; mandatory training and assistance for defense teams handling such litigation from military experts; education about PTSD and related matters for prosecutors, judges, and defense attorneys who may be involved in such cases; allowance of mitigation testimony regarding military culture at capital trials; questioning of potential jurors regarding their views about the military; and allowing VA therapists to testify in capital cases”.

Most surprising, Dieter said, was how often a veteran’s military service was overlooked, discounted or even presented as an aggravating factor in capital cases.

“Defense attorneys failed to investigate this critical area of mitigation; prosecutors dismissed, or even belittled, their claims of mental trauma from the war; judges discounted such evidence on appeal; and governors passed on their opportunity to bestow the country’s mercy,” he wrote in the report.

A defendant’s military history is a “double-edged sword”, said Ken Rose, a defense attorney with the Center for Death Penalty Litigation in North Carolina who represents clients sentenced to death, including Davis, because lawyers, juries and judges can interpret it as both a mitigating and an aggravating factor.

“On the one hand it shows a commitment to the country. It’s patriotic and sometimes even a heroic service to the nation,” said Rose, who represents Davis. “But at the same time it can be seen as an indication that their client is a mad dog – a person who is totally out of control, who may get out and kill again.”

Rose agrees with the report’s suggestion that defense attorneys should receive training when handling a case involving a veteran. To properly present a person’s service as a solely mitigating factor, rather than an aggravating one, and sharply draw a connection between trauma suffered in combat and the act of violence takes a deep understanding of the military and mental illness, he said.

Otherwise, Rose said, “defense attorneys don’t bring up this very valuable mitigating evidence for fear that it be turned against them”.

The American public is starting to recognize the unique pressures veterans face when they return home from war, but the legal system has been slow to accommodate them, said Art Cody, the legal director at the Veterans Defense Program of the New York State Defenders Association. (Cody does not represent veterans in capital cases as New York does not have the death penalty.)

But in exchange for a more lenient punishment, Cody said he believes judges and prosecutors disregard testimony that is related to a defendant’s combat experience and mental illness.

“We haven’t reached the point yet where we’re fully understanding the conditions that our troops are going through,” Cody said.