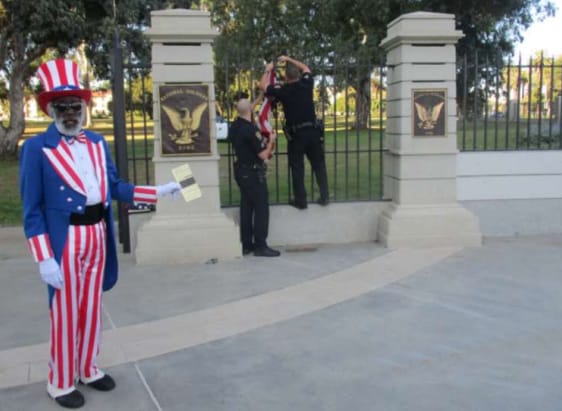 LOS ANGELES – Just when you thought the VA couldn’t swim any deeper into the cesspool of crime, corruption and retaliation, they plunged to even lower depths when they issued a falsified arrest citation to “Mr. Patriot” (Ted Hayes) for hanging two American Flags on the front fence outside the VA’s National Veterans Home and then forcefully removed and confiscated them as “evidence.”

Ted Hayes is a legendary civil, human and homeless rights activist as well as a public icon for promoting American Patriotism in honoring our American Flag and the men and women who defend it, particularly those who are convalescing from their war injuries.

This past Sunday, Ted hung two American Flags — one 13 and a 50-Star Flag — in honor of America’s Military Veterans during the 399th  consecutive Sunday Rally of the Veterans Revolution to “Save Our Veterans Land” and to “Bring Our Homeless Veterans HOME.”

Two weeks ago, the VA bureaucrats sent out the VA Police to retaliate against me for my relentless exposing the biggest land-fraud scandal in American history and the VA’s criminal and inhumane treatment of homeless Veterans.

The VA Police issued a falsified arrest citation against me for “displaying placards” and then illegally confiscated my two American Flags, one that I’d purchased on September 11, 2001 because of its historic significance

Ever since President Obama appointed Robert A. McDonald as Secretary of the VA more than a year ago, the crime, corruption, cronyism and retaliation at the Los Angeles VA has escalated to new altitudes while he plunges to new depths of pathological lying, cheating and stealing from America’s Veterans for the benefit of his rapacious and elitist friends who illegally control this sacred land in our nation’s capital for homeless Veterans.

This Sunday will be our 400th consecutive Sunday Rally of the Veterans Revolution led by the Old Veterans Guard.

We have steadfastly assumed the responsible duty to resist the VA’s gross injustice that is compounded by out-of-control crime, corruption, cronyism.

Correspondingly, even though we have been repeatedly harassed, intimidated, lied to and lied about, stalked and spied upon, threatened, retaliated against and falsely arrested by an out-of-control federal bureaucracy with the support of corrupt politicians who answer to wealthy and powerful special-interest groups that never have the best interests of Veterans in mind.

While the years may have weakened our bodies, they have also strengthened our spirit and resolve.

We will not retreat nor will we surrender.

Nor will we desert our fellow war-injured and impoverished homeless Veterans who need permanent housing and healthcare.

Thomas Jefferson rightfully proclaimed: “To remain silent when they should protest makes cowards of men.”

Correspondingly, we will continue with our peaceful, patriotic and non-violent protests.

Join us this Sunday and bring your American Flags.