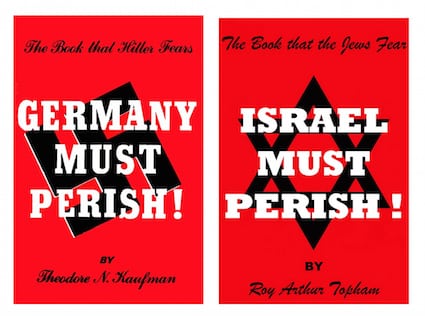 Arthur Topham, the man behind Radical Press, was found guilty yesterday on one count of communicating statements that “wilfully promote hatred against an identifiable group.”

Some Canadians such as Harry Abrams, former B.C. representative for the League of Human Rights for B’nai Brith Canada, were thrilled. “Canada says that you should be able to walk in peace and not be fearful to be victimized, to be vilified, because of who you are or who you were born as,” Abrams told CBC News. But Topham, who has been married to a Jewish woman for over 37 years, doesn’t criticise or vilify Jews for who they are or the family into which they were born. He actually criticises some Jews, like Abrams, who subscribe to some particularly noxious tribally exclusive politics and ideology. Topham must have wrongly assumed that in a Western society, all forms of politics and ideologies, including Jewish ones, must be subject to criticism.

Topham’s case is full of surprises. Topham was found guilty on ‘count one’ but not guilty on ‘count two.’ But the two counts are pretty much identical in meaning, content and context. Both counts refer to “communication of statements, other than in private conversation, that wilfully promote hatred against an identifiable group, people of the Jewish religion or ethnic origin, contrary to Section 319(2) of the Criminal Code.“ The two counts differ only in the dates they cover.

Some commentators and legal experts speculated yesterday what led the jury to form such an inconsistent ruling.  The documents, books and texts disseminated by Topham on his site (The Radical Press) within the period covered by both counts are all widely available to the Canadian public on many on-line outlets including amazon.ca. The one document on Topham’s site that has not been widely available recently is: ‘Israel Must Perish!’

Topham’s satire, published in 2011, was obviously intended to make Israelis and Zionists reflect on their politics following a decade of extensive Jewish lobby advocacy of more and more immoral interventionist wars (Iraq, Syria, Libya, Iran etc). ‘Israeli Must Perish!’ is a mirror placed in front of the forgotten Kaufman’s ‘Germany Must Perish!’ Presumably, Topham saw some applicability of a critique of Germany in 1941 to Israel and global Zionism today.

If history is the attempt to narrate the past as we move along, then the return to Kaufman’s text couldn’t be more timely and essential. In an interview in the September 26, 1941, issue of The Canadian Jewish Chronicle, Kaufman attempted to justify his plan for the “sterilization of all Germans”. He said:

“I believe, that the Jews have a mission in life. They must see to it that the nations of the world get together in one vast federation. ‘Union Now’ is the beginning of this. Slowly but surely the world will develop into a paradise. We will have perpetual peace. And the Jews will do the most to bring about this confederation, because they have the most to gain. … Let us sterilize all Germans and wars of world domination will come to an end!” (Harold U. Ribalow (September 26, 1941). “Hitler Will Be Nothing But A Rosebud Says Author ‘Germany Must Perish!’. One Man’s Plan For Peace Forever”. The Canadian Jewish Chronicle. p. 5. Retrieved December 4, 2011.)

At the time, Kaufman’s book was widely quoted in Germany as evidence of a Jewish plan for genocide against the German people. Goebbels wrote,

“Thanks to the Jew Kaufman, we Germans know only too well what to expect in case of defeat.”

American journalist Howard K. Smith was in Germany when Germany Must Perish! became known. He wrote:

“No man has ever done so irresponsible a disservice to the cause his nation is fighting and suffering for than Nathan Kaufman. His half-baked brochure provided the Nazis with one of the best light artillery pieces they have, for, used as the Nazis used it, it served to bolster up that terror which forces Germans who dislike the Nazis to support, fight and die to keep Nazism alive …”( Howard K. Smith, Last Train from Berlin (London: Phoenix Pr., 1942), 134)

When the Jews of Hanover were evicted on September 8, 1941, the local authorities cited Kaufman’s book as one of the reasons. The well respected German philosopher and historian Ernst Nolte argued recently that the German reaction to ‘Germany Must Perish!’ supports his view that WWIIwas a genuine response to German knowledge of a worldwide Jewish plot.

And yet, Kaufman’s book was concealed for 7 decades. It didn’t fit into the Zionist Shoah narrative. It was, in fact, Arthur Topham and his crude satire that brought Kaufman’s hateful text to our attention.

Topham’s crime is obvious, the radical man is guilty of unveiling some shameful corners in Jewish past, exposing some documents Jews would prefer to keep deep under the carpet.

If Topham has to be penalised for contextualizing Israeli present within a Jewish historical continuum, we may have to accept it. Within the western ethos often enough the brave truth teller pays heavily for other people’s sins. But we should never forget that that within the same Western ethos, the truth has the unique capacity to resurrect itself.

Make sure to save a copy of Germany Must Perish! onto your HD before it is removed by the Canadian thought police: http://www.radicalpress.com/?page_id=1314