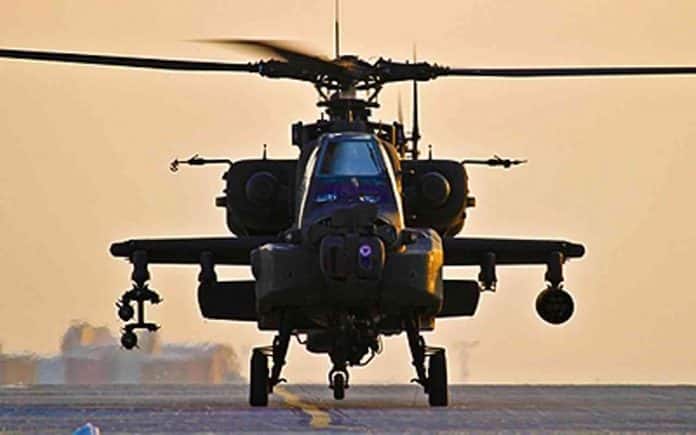 Editor’s note:  The trucks are ISIS.  The helicopter is an American apache though some of these were given to the Kurds in a secret deal in 2007.  I was there at the time and tried to photograph them and was prevented. This video has NOT been debunked, was posted November 12 and we are told has location tags showing Syria.
We now have reports that the video exists without the helicopter but with no link supplied.  If this is true, post a link. The source is Russian and this video was published on Iranian media today.
____________
TEHRAN (FNA) – A movie displayed by an Arab news website showed that a long convoy of the ISIL terrorists’ military vehicles was going on a Highway towards battlefronts with the aerial back up of a US military Apache helicopter.

The UAE-based al-Sa’a displayed a video clip of over 200 Toyota vans carrying the flag and members of the ISIL terrorist group driving on one of the main highways of Syria while an Apache chopper of US military was accompanying them in a friendly manner.

The Arab media reported that the ISIL convoy did not open fire at the US chopper, which was flying in a very low altitude.

The FSA is an armed Syrian opposition faction, considered “moderate” by the western countries, fighting the Syrian army loyal to President Bashar Assad since the beginning of the war in 2011. In 2014, the US Congress allocated $500 million to create FSA force of more than 5,000 men by the end of 2015.

According to him, ISIL forces in Syria had been able to capture and use modern US equipment from the FSA just as their counterparts in Iraq enjoyed the use of huge quantities of US equipment they had captured from fleeing US-trained Iraqi forces.

The US idea of “a liberal, democratic freedom-loving, peace-loving opposition”, an alternative to Syrian President Assad, was just nonsense, Kiriakou said. The US should have stayed out instead of making the situation worse, he added.