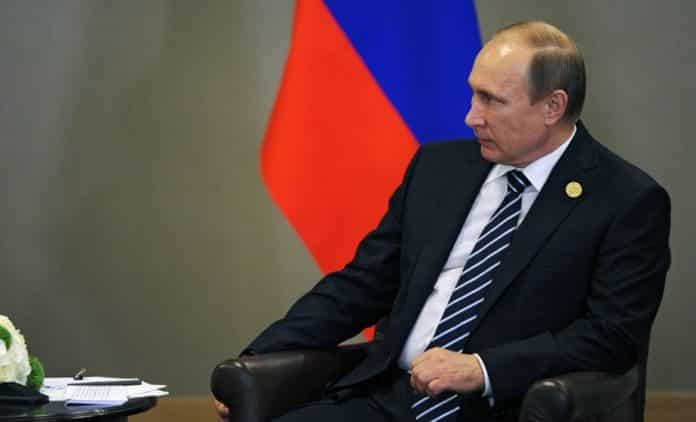 Russian President Vladimir Putin during a meeting with Italian Prime Minister Matteo Renzi on the sidelines of the Group of 20 summit in Antalya, Turkey. © Michael Klimentyev / RIA Novosti
President Vladimir Putin says he’s shared Russian intelligence data on Islamic State financing with his G20 colleagues: the terrorists appear to be financed from 40 countries, including some G20 member states.

During the summit, “I provided examples based on our data on the financing of different Islamic State (IS, formerly ISIS/ISIL) units by private individuals. This money, as we have established, comes from 40 countries and, there are some of the G20 members among them,” Putin told the journalists.

Putin also spoke of the urgent need to curb the illegal oil trade by IS.

“I’ve shown our colleagues photos taken from space and from aircraft which clearly demonstrate the scale of the illegal trade in oil and petroleum products,” he said.

“The motorcade of refueling vehicles stretched for dozens of kilometers, so that from a height of 4,000 to 5,000 meters they stretch beyond the horizon,” Putin added, comparing the convoy to gas and oil pipeline systems.

It’s not the right time to try and figure out which country is more and which is less effective in the battle with Islamic State, as now a united international effort is needed against the terrorist group, Putin said.

The meeting was constructive however. ATALYA, November 16. /TASS/. The meeting between Russian and US presidents Vladimir Putin and Barack Obama, held on the sidelines of the G20 summit on Sunday, was constructive, Russian presidential spokesman Dmitry Peskov has said. At the same time he warned against expecting a breakthrough in bilateral relations after such a brief meeting.

“It would be absolutely unrealistic to expect a 20-minute meeting might herald a U-turn in bilateral relations,” he said.

“These relations are what they are. So are the disagreements. But there is also the understanding the Russian-US dialogue has no alternative. That’s a hard fact,” Peskov said.

“It would be wrong to think that twenty minutes is enough to overhaul bilateral relations, but the conversation was constructive, indeed,” Peskov said.

Vladimir Putin and Barack Obama had a 20-minute informal conversation. The two leaders used a break between the meeting of the BRICS heads of state and the summit’s working session to have separate conversation. They took seats in front of each other and spoke tete-a-tete in the presence of their interpreters.

Putin and Obama had a full-format meeting in late September in New York on the sidelines of the UN General Assembly. That was their first meeting face-to-face over two years.

Yuri Ushakov said earlier Putin and Obama had not planned a meeting during the G20 summit, though could not rule out their contacts on the sidelines.