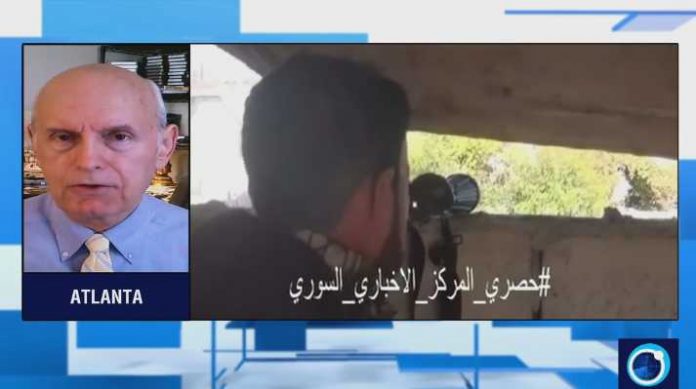 [ Note: This Kuwayris air base recapture could be the lynchpin move for taking Aleppo if it can be quickly set up as a forward ground support facility. But it would have required a lot of logistics planning to have the resources ready to move in quickly.

Initially the attack helicopters could be used but the Russians did not bring many of them in, and their primary use has been for base protection. We will find out over the next week or two if that is in play. A back up to that would be making it a command center and transportation hub for bringing in critical supplies and evacuating wounded.

A forward airbase “light” option would be having rearming crews to allow some bombers to land and reload to run multiple attack missions faster during a major battle or when during an enemy rout while they are on the roads so you can bring maximum fire power down on them to prevent them from fighting another day.

When you have a static fight your artillery is the weapon of choice as you can keep pounding away on a target. But is a fluid battlefield your air power can make the big difference, not only in winning and losing, but keeping your causalities lower. Infantry, of course, always prefer having both… Jim W. Dean ]

Syrian soldiers celebrate the liberation of an air base in Aleppo province which was under the siege of Daesh terrorists for nearly two years.

According to the Syrian state television, the army has secured the Kuwayris air base and freed hundreds of soldiers and personnel. It also inflicted heavy losses on ISIL terrorists. This is considered the most high-profile victory for Syria since Russia started its air campaign against the terrorists on September 30. Syrian media say President Bashar al-Assad has congratulated the commander of the offensive that broke the siege.

The Syrian army and allied Hezbollah fighters have also liberated the village of Rasm al-Aboud near the Kuwayris air base. Reports also say airstrikes and artillery shells have also targeted the town of Hadhir on the southern outskirts of Aleppo.