Home Government Is Cameron a Chamberlain pretending to be a Churchill? 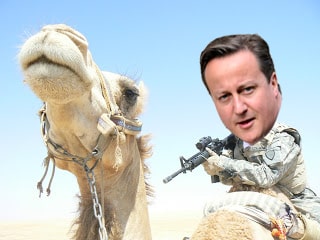 Following the massacre in Paris, Cameron vowed “to ramp up the fight against ISIS” and to destroy the “fanatical extremist state at its source.” Impressive stuff, no doubt. The British PM even sat a time frame for his apocalyptic vision.

He promised to deploy the RAF in the region before Christmas. Come on Mr. Cameron, we are not talking here about a 19th century cavalry schlepped through Europe on a sluggish steam engine train.

Cameron well knows that the RAF’s Jaguars can be in the region within less then two hours. An RAF squadron can become operational within a day. Cameron is obviously trying to buy time.  He hopes that by Christmas the incompetent François Hollande will get himself into so much trouble that Britain will have to come to the rescue as a peace envoy. Not bad, I like the idea.

Being a curious person I decided to ask my friends in the MOD why it takes the Brits ten years to build a ‘strike brigade,’ a task every other army around the world can easily accomplishes within two to three months.

Apparently, the British army decision makers do realise that victory in a possible future desert war against Isis is dependent on a new breed of camels that are faster than a Toyota 4×4.
Creating such a genetic hybrid between a camel and an ostrich is not a simple task. It takes time and as it seems Cameron and the MOD are not prepared to take any risks. The British military elite learned their lesson in Dunkirk. This time they are going to be ready.