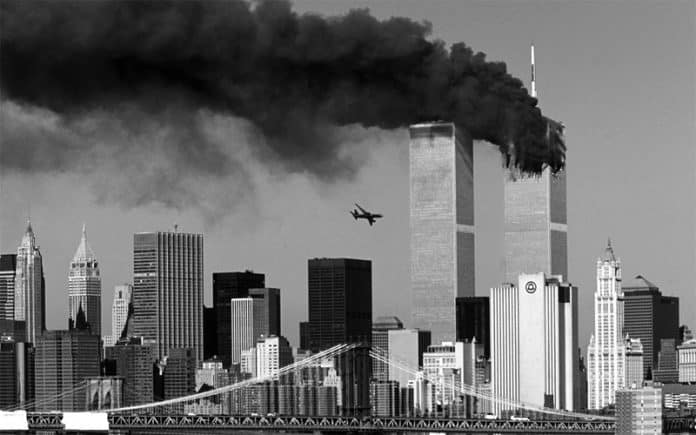 The Zionist regime was the prime force behind the 9/11 attacks, and Israeli spies working for Mossad were celebrating the burning Twin Towers on September 11, 2001, not Arab Muslims, an American scholar and journalist in Wisconsin says.

Dr. Kevin Barrett, a founding member of the Scientific Panel for the Investigation of 9/11, made the remarks in an interview with Press TV on Monday, a day after an international Jewish organization based in the US denounced Republican presidential candidate Donald Trump’s claim that dozens of Arab Muslims cheered as the World Trade Center collapsed on September 11 as unsubstantiated.

“It is unfortunate that Donald Trump is giving new life to long-debunked conspiracy theories about 9/11,” the Anti-Defamation League (ADL) said in a statement on Sunday, after Trump said in an interview with ABC News that there were “people over in New Jersey that were watching it, a heavy Arab population that were cheering as the buildings came down.”

The ADL statement said there is no basis for Trump’s claim, calling it irresponsible and factually challenged. “This seems to be a variation of the anti-Semitic myth that a group of Israelis were seen celebrating as the Twin Towers fell.”

Commenting to Press TV, Dr. Barrett said the Anti-Defamation League is “correct that Trump is factually challenged when he talks about the Arabs celebrating the destruction of the World Trade Center on September 11th.”

“But he in fact is referring to a true story, which is that Israeli spies working for the intelligence agency Mossad were in fact arrested after they were caught celebrating the September 11th attacks,” he added.

“They were set up to film the World Trade Center attacks before the first plane hit. They wildly celebrated the flaming and then exploding Twin Towers. They photographed themselves flicking cigarette lighters in front of the burning and exploding buildings,” he stated.

“And then they were arrested. They were held for forty or so days. They failed lie detector tests, and they then returned to Israel. They went on television and admitted that they were there to ‘document the event’, that is Israeli spies led by Sivan Kurzberg are on record in the Israeli mainstream media, bragging that they were sent to New York to document the event,” he said.

“And that means that the people they were working for, namely the Israeli government, were complicit in the event. Apparently the Anti-Defamation League doesn’t know that, because they are saying that Trump’s comment blaming the Arabs appears to be a mixed up version of what they are calling the ‘myth’ of the dancing Israelis celebrating their success on 9/11. But that’s not a myth,” Dr. Barrett emphasized.

“It’s been reported reliably in all kinds of mainstream media, including the Bergen New Jersey Record, which first exposed the story. The leading Jewish newspaper in the United States, The Forward, and Israeli media – including the television show in which Kurzberg brags about being sent to New York to document the event, that was coming up on September 11th,” he pointed out.

“So, the Anti-Defamation League, which is actually an Israeli propaganda outfit, is essentially running a misdirection ploy. They are trying to discredit ‘conspiracy theories’ about 9/11, because they know full well that the government of Israel was the prime force behind the attacks on September 11th,” the analyst explained.

“The Anti-Defamation League is lying when they are calling it a myth. It isn’t a myth.  And every place from the Jewish newspaper The Forward to the Israeli media, even to Fox News, which ran an investigative series by Carl Cameron, admits that this actually happened. Mossad agents were caught red-handed celebrating the success of their destruction of their World Trade Center by controlled demolition on September 11th, 2001,” Dr. Barrett concluded.

The September, 11, 2001 attacks, also known as the 9/11 attacks, were a series of strikes in the US which killed nearly 3,000 people and caused about $10 billion worth of property and infrastructure damage.

US officials assert that the attacks were carried out by 19 al-Qaeda terrorists but many experts have raised questions about the official account.

They believe that rogue elements within the US government, such as former Vice President Dick Cheney, and foreign intelligence agencies orchestrated the 9/11 attacks in order to accelerate the US war machine and advance the Zionist agenda.

Dr. Barrett and other eminent scholars have argued that the 9/11 attacks were carried out through a “controlled demolition” technique by placing explosive material inside the twin towers, causing the structures to collapse on themselves in a matter of seconds.