Home Life Théâtre de la Huchette has been showing 2 Plays by Ionesco for... 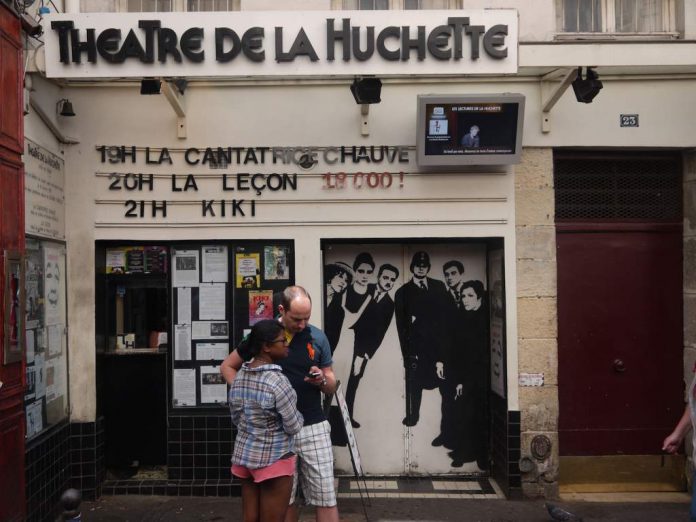 In the well known Latin Quarter near Notre Dame and the Sorbonne in Paris, the famous Theatre de La Huchette at 23 rue de la Huchette attracts tourists and locals who stand in line to buy tickets and wait for the doors to open to see some interesting plays. The small theatre which has only 100 places was founded in 1948  in its present location by Georges Vitaly.  Jean-Nöel Hazemann, the manager of this great theatre, is often seen at the entrance door greeting the audience.

In February 1957 two plays “La Contatrice Chauve” and “La Leçon” by French-Romanian playwright Eugène Ionesco (1912 -1994), were performed at Theatre de la Huchette with great success. These two plays have been playing here for over 56 years and hold the record for the longest run of any theatrical production in the same theatre. “La Contatrice Chauve” (The Bald Soprano or Bald Prima Donna) was the first play written by Ionesco. It is, by far, the more popular of the two and it presented Tuesday through Saturday at 7:00 p.m. followed by “La LeÇon” (The Lesson) – a French one-act play. A third play starts at 9 p.m. Tuesdays to Fridays and at 4 p.m. on Saturdays.

In 2000, Theatre de la Huchette received the Molière de L’honneur award for its fidelity to Ionesco.

We enjoyed “La Cantatrice Chauve,” a comedy in the British tradition, about two couples. Ionesco wrote the play in 1950 and it has been a success ever since due to the actors and actresses who use gestures and reactions in a spectacular way. The night we saw this play there were not enough seats and so they accommodated the audience by bringing in extra chairs so all those in attendance could stay to see the play.

“La Leçon” is a play about a student getting a private lesson. The student, her tutor, and a housekeeper play their roles well.  There were not many people who stayed for this play the night we saw it but those who did applauded the cast.

Until January 2, 2016 a superb musical “Kiki”, written by Milena Marinelle and Hervé Devolder starring Milena Marinelle is playing at Theatre de la Huchette. This musical comedy is a story of a lady named “Kiki” of Montparnasse in Paris during the” années folles”  (the crazy years) of the 1920s. Based on a true story, Kiki, dressed in a the roaring 20s costume recounted the life of a famous lady who grew up as a poor girl and became  a model for famous painters of the Ecole de Paris such as Modigliani, Soutine, and Man Ray. She also enjoyed entertaining audiences at caberets. Milena Marinelle played the role well and acted, sang and danced with enthusiasm.  Andrian Cadier played the piano. It was an uplifting experience that we enjoyed and noticed that the audience also were enthusiastic. 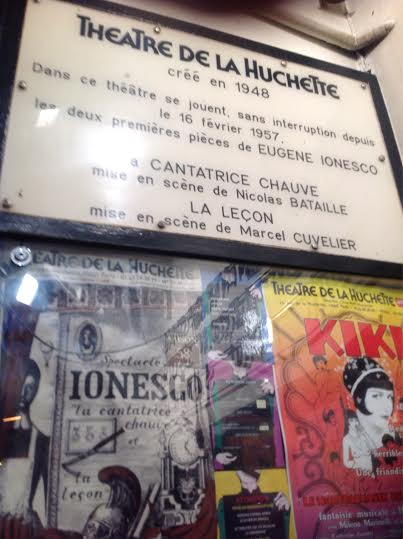 For those visitors to Paris who speak French, and local theatre patrons, these three plays at Theatre de la Huchette are must sees. It is recommended to reserve tickets in advance.