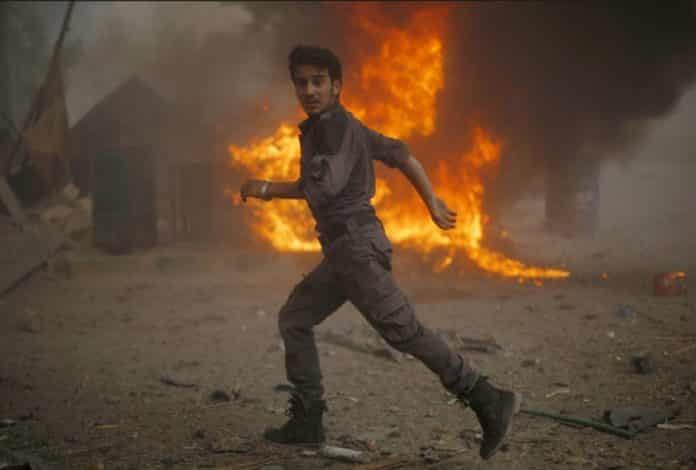 When you see a video of an ISIS beheading or perhaps a “barrel bombed” Syrian school, you are seeing the results of the media partnership, a multi-million dollar one, between ISIS and her sister terror groups and media organizations like Reuters and AP.  Working closely with “sockpuppet” rights groups and NGO’s who have long been a front for that other partnership between ISIS and Turkish/Saudi intelligence services and rogue CIA factions, “stringers” by the dozen serve alongside ISIS terrorists.

It isn’t just ISIS media groups, like the one Russia destroyed yesterday after receiving coordinates from Anonymous through media personality Jeff Rense, it is the major media as well.  The money flows in from stories and photos, from beheading videos whose rights are vigorously defended though the funding flows directly into the coffers of the terror groups whose barbarous acts are being depicted.

Worse still are the hoaxes and planted or “seeded” false stories through AP and Reuters, picked up by media like the Washington Post, CNN and the Guardian, staged photos and false stories of gas attacks and “barrel bombings,” always of schools, hospitals, mosques, kindergartens and senior citizens homes.

The stories that come from this partnership, ISIS and the western media, are parroted by President Obama, Britain’s Cameron and others as “gospel.”

When tracing the background of those involved, the western media that live so comfortably among the ISIS “beheaders” with no fear whatsoever, we find a common history.  Most are from Radio Liberty or Radio Free Europe, CIA fronts with many others having worked in the Israeli media, particularly the Jerusalem Times.

The other partnership that adds feigned legitimacy to the stories is the channel they are distributed through.  ISIS sends all propaganda to the press through the Syrian Human Rights Observatory, a UK based “group” of one person with no background or qualifications but who is able to place stories on the front pages of dozens of major newspapers, stories which are universally unsourced, unconfirmed and almost invariably, only days later, proven to be utterly false.

It has long been a goal of “black propaganda” operations to be self funding.  ISIS makes millions in partnership with the Erdogan family selling oil, not just in Turkey, but around the world, as Russian has proven.

What isn’t being noted is the funding for propaganda photos like the one featured above maintain a veritable army of disinformation specialists who exist alongside the most dangerous criminal elements perhaps in world history, living among them with impunity, selling their stories and helping fund their bestiality.

Where innocent aid workers are beheaded, seemingly for amusement, where mass graves of women and children are discovered weekly, “certain members of the press” move without fear at all.  No one asks why.  It is time that Reuters and their associates are brought before an international tribunal just as Julius Streicher was for publishing Der Sturmer in Nazi Germany.