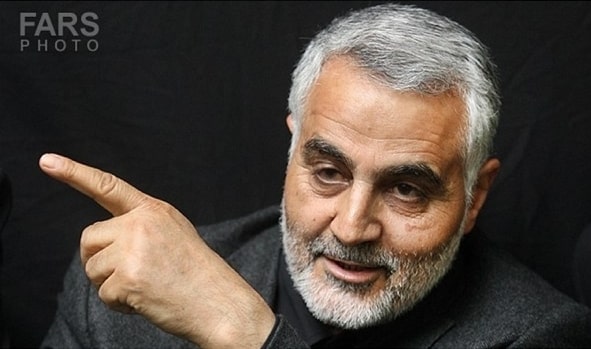 TEHRAN (FNA) – The Russian media hailed Iran’s globally renowned IRGC Qods Force Commander Major General Soleimani for leading the successful operation which resulted in rescuing the pilot of Russia’s Su-24 jet that was shot down by Turkey over the Syrian airspace on November 24.

Other Russian media also covered the article published by ‘A Group of Fans of Putin’.

Last Thursday, Russian sources revealed that the pilot of the Russian Su-24 jet that was shot down by Turkey over the Syria on November 24 was rescued in an operation led by General Soleimani.

On November 24, a Russian Su-24 bomber jet crashed in Syria. President Putin said that the plane was downed by an air-to-air missile launched by a Turkish F-16 jet over Syrian territory, falling 4 kilometers (2.5 miles) from the Turkish border.

The crew of the plane ejected and one pilot was killed by fire from the ground, according to the Russian General Staff. The co-pilot Captain Konstantin Murahtin survived. But the story of how he survived in a land surrounded by various types of terrorist groups for tens of kilometers was unknown until today.

Emad Abshenas, a reporter for Russia’s state-run Sputnik news agency, wrote a piece in the Persian-language website of the Russian agency quoting the entire story from a senior Syrian officer, and FNA gave out the English version.

Here is the story again:

“I contacted one of the Syrian officers who is my old friend and is stationed in Lattakia and asked him to tell me the story, and here is what he said,” Abshenas mentioned.

After the downing of the Russian fighter jet, the Russian helicopters took off immediately to save the pilot but they faced the heavy fire power of FSA (or the so-called moderate opposition, the Free Syrian Army, supported by the West) and the Turkey-back Turkmens who targeted the helicopter with missiles and advanced weapons that they have gained recently. During the operations one Russian aid worker was killed.

Credible information was obtained that a number of special Turkish units had been sent to the scene to take the Russian pilot captive to blackmail Russia later. While the Russians were planning for another operations to free the pilot immediately, General Soleimani contacted them and proposed them that a special task force unit be formed of Hezbollah’s special forces and Syrian commandos who have been trained by Iran and are fully familiar with the geographical situation of the region to be tasked with the ground operations and Russia provide them with air cover and satellite intelligence.

Soleimani promised them to return the Russian pilot safe and sound; a promise that was kept in the end, according to the Syrian officer.

After tracing the place of the Russian pilot using his GPS, it was revealed that the pilot was being kept in a place 6km behind the frontline of the clashes between the Syrian army and the opposition.

Six fighters of Hezbollah’s special operation unit and 18 Syrian commandos approached the frontline to carry out the operations and the Russian air force and helicopters concurrently created hellfire in the region and destroyed the terrorists’ headquarters in a way that most of the enemy forces deployed in the region fled the scene and the ground was paved for the special unit’s advance.

The Syrian officer added that every move of the special units was monitored and covered precisely by the Russian satellites in a way that the slightest moves made 100 meters away from the area of operation was reported to them and every moment of the operation was reported to a very high-raking official in the Kremlin (that he thinks was president Putin) and it was clear that he was monitoring the entire operations through satellites from Moscow.

According to the officer who called for anonymity, the operation later turned into a hunt of the terrorists in the operation zone by the Russian air force from the sky and by Brigadier General Soleimani’s operations units on the ground.

Finally, the special unit saved the pilot after infiltrating 6km behind the enemy lines, killing the terrorists operating in there and destroying their hi-tech equipment.

The interesting point is that all the 24 members of the special units along with the pilot returned to their base without even one injury after fulfilling the dangerous mission.

According to the senior Syrian officer, one of the reasons for the success of these operations was the difference between Turkey and the terrorists over the fate of the Russian pilot as the Turks wanted him alive to use him for political blackmailing against the Russia. While the terrorists stationed in the region intended to burn him alive like what did to the Jordanian pilot to fill the hearts of other Russian pilots with fright. And this rift paved the ground for rescue operations some golden hours. Since the opposition never imagined that such a rapid planning and action by the rescue squads would be possible, given the complicated nature of such operations.

The Syrian officer said that General Soleimani insisted to supervise the details of the operations at the head of his forces and stayed in the operations room until he came to rest assured of their success.

Abshenas then comes out of the report with a number of interesting points, saying:

1.General Soleimani is fully healthy and is actively commanding operations in the frontline of the war against terrorists and responds rumors about himself with action and not by words and slogans.

2.There is no extremist and moderate oppositions in Syria; all of them are terrorists appearing in the public in different clothes and under different masks.

3.The Group 4+1 cannot trust other countries in any field and they should rely on themselves to eliminate the terrorists in the region based on their own specified plans.

4.Iran and Russia’s operational coordination in Syria is highly integrated and can break all enemies’ fronts.

5.Most of the FSA’s Syrian members had withdrawn from the region after they came under Russia’s airstrikes and the commandos fought non-Syrian forces who were using classic military tactics and not guerilla warfare and therefore, they could well be Turkish militaries or army forces of other countries. The commandos, of course, had no other choice but to kill them given the importance of rapid action in the operations and they didn’t had enough time to hold them captive.

6.The terrorists present in the region possessed very modern and advanced military equipment for ground-to-ground and ground-to-air warfare which are not even supplied to a large number of countries which are Washington’s NATO allies.

7.According to informed sources who had traced the wireless contacts between the opposition forces, the Arabic, Turkish, Russian and French are respectively the most frequently used languages by the terrorists, revealing that the countries which are mostly posed to the danger of the return of these terrorists and shows that Russia is forced to continue fight until the complete annihilation of the terrorists in Syria to safeguard its own national security.