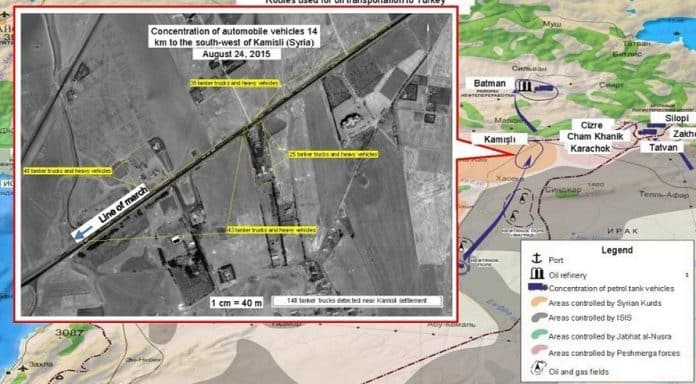 The routes of alleged oil smuggling from Syria and Iraq to Turkey © Ministry of Defence of the Russian Federation
[ Update: FARS news is reporting that Turkey has blinked, and is pulling Turkish troops out of Iraq where they have been helping to provide security with ISIL for the oil truck routes. Kurdish troops don’t need to be “trained” by anybody. They have been fighting for ages. The idea of their needing training is ridiculous and should be an embarrassment for any media that would publish it without a qualification.

FARS: Turkey had dispatched a battalion comprising 130 soldiers to an area near the city of Mosul on the pretext of providing military training to the Kurdish Peshmerga fighters. Mosul is now under the control of the ISIL Takfiri terrorist group.

“The Turkish forces have left Nineveh province,” the Arabic-language al-Mayadeen TV quoted an unnamed high-ranking official as saying today.The Turkish government claimed that it has sent troops to the Northern parts of Iraq in a bid to train the Kurdish Peshmerga fighters.

There is a lot more to the story have involves the Erdogan family and the Kurds in a long history of stolen oil, something they have been doing for so long their attitude has been that they will use the stolen oil revenue to finance the cost of taking over the area completely eventually…Jim W. Dean ]
____________
– First published  …  December  05, 2015 –
Iran has evidence of illegal oil trade between Turkey and Islamic State (IS, formerly ISIS/ISIL) – and is ready to deliver the information to Ankara and the public, a state official said. Tehran has gathered photos and video footage of oil trucks entering Turkey.

“If the government of Turkey is not informed of Daesh [derogatory term for IS] oil trade in the country, we are ready to put the information at its disposal,”Iran’s official Islamic Republic News Agency (IRNA) quoted Expediency Council Secretary Mohsen Rezaie as saying on Friday.

Rezaie elaborated that Iran is in possession of photo and video evidence of IS oil entering Turkey in trucks, adding that Iran is ready to broadcast the information.

“Soon important news will be brought to the information of the public about the removal of Takfiris and Daesh,” he said. Rezaie also called on all countries fighting IS to concentrate on eradicating terrorism.

The comments were made as the official visited victims injured in Syria.

Earlier this week, the Russian Defense Ministry released maps and satellite imagery it said proved that Turkey is the main consumer of oil smuggled out of Syria and Iraq by IS. The ministry also claimed that the Turkish president and his family are involved in the criminal dealings.

Deputy Defense Minister Anatoly Antonov, who hosted the briefing, said: “A united team of criminals and Turkish elites, involved in stealing oil from its neighbors, is acting in the region. This oil is being supplied to Turkey on a large industrial scale via improvised pipelines composed of thousands of oil truck tankers.”

Meanwhile, many Turkish citizens question Erdogan’s denial and appear not to be surprised by the evidence presented by Moscow.

RT’s Harry Fear asked people on the streets of Istanbul what they made of the report presented by Russia’s Defense Ministry.

“I believe that Erdogan and ISIS have some [contract] between them,” one man said. Another Istanbul resident told RT that“the rumors have been circulating for a long time and everyone knows what’s going on, but nothing has been done about it.”