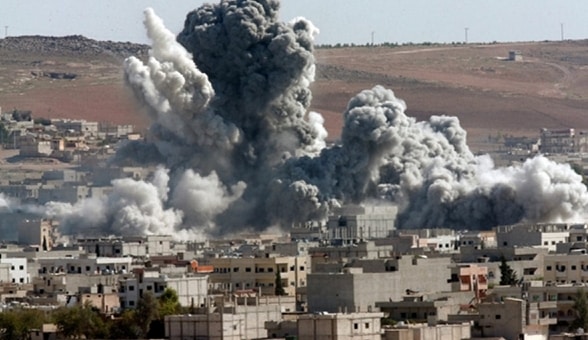 TEHRAN (FNA)- Twenty civilians were killed in a US airstrike on Syria’s Northeastern Hasaka province following another US air raid on the Syrian army base in Southeastern Deir Ezzur province that killed several soldiers earlier today. (British planes have been identified as responsible for the Syrian army raid and may well have done this one also.)

The US-led airstrikes hit al-Khan near al-Hawl town in Hasakah, killing 20 civilians and injuring 30 others.

Earlier this morning, four US-led coalition warplanes targeted the Syrian army camp with 9 rockets, claiming the lives of 4 soldiers and injuring 16 others.

Both dissidents and government sources confirmed early on Monday that the US warplanes struck the military camp of the Syrian army’s 137th Artillery Brigade (17th Reserve Division) in the Southern part of ‘Ayyash’ village, killing 4 soldiers instantly and wounding 16 more. Six of the wounded soldiers are in critical condition.

They further added that the ISIL terrorists stormed the bombed camp a few hours after the air attack.

The Syrian army’s 137th Brigade has been protecting the civilians in ‘Ayyash’ from the swarming ISIL fighters that are attempting to break into the provincial capital of the Deir Ezzur province from the Northern side; this airstrike only boosted the ISIL positions inside this village and the nearby broadcast tower.

The sources further added that the ISIL launched an offensive against the government forces’ positions in Ayyash village 10 kilometers Northwest of Deir Ezzur city.

The Syrian army and its allies have gained upper hand in the Eastern province of Deir Ezzur in the recent weeks, after new recruits of popular forces joined the army and won back new lands across the province , and meantime fended off the ISIL attacks on their positions, mainly the Deir Ezzur airbase.

TEHRAN (FNA)- Battlefield sources announced on Monday that the Syrian Army’s offensive on the Free Syrian Army’s (FSA) gathering centers in the Southern territories of Aleppo province claimed the lives of many terrorists, including a top commander.

Yasser Abu Saeed, commander of FSA’s Sham Brigades, was killed alongside a number of his forces in the army attack in the Northern province of Aleppo, the sources said.

“The FSA military hardware also sustained heavy damage in the Syrian government forces’ attack,” they went on to say.

The Syrian forces have won back several villages and towns of the Aleppo province from the militant groups in the recent weeks.

Military officials said earlier today that the Syrian Army and popular forces are advancing on militant positions in the Southern part of Aleppo province and have thus far forced the terrorist groups to withdraw forces from vast territories.

The Syrian army and its allies’ operation forced the militant groups to retreat from al-Hamra village, the sources said.

“Tens of the militant groups were killed or wounded in the army’s operation, and the remaining of the terrorists fled the battle zone to evade further casualties,” the sources added.

Also sources said today that the Syrian army captured two more villages in Aleppo province amid reports of the arrival of Syrian reinforcements to Southern Aleppo.

The Syrian Army’s 43rd, 82nd, and 155th Brigades of the 4th Mechanized Division, backed by Hezbollah, Harakat Al-Nujaba (Iraqi paramilitary), and the National Defense Forces (NDF) of Aleppo city, retook full control of the villages of Zeitan and Al-Qala’jiyah near the strategic city of Khan Touman after a series of firefights with the terrorists from the al-Qaeda affiliated al-Nusra Front, Harakat Nouriddeen Al-Zinki, and Harakat Ahrar Al-Sham.

The villages of Zeitan and Al-Qala’jiyaj are situated to the South of Khan Touman and approximately 1km East of the strategic Aleppo-Damascus Highway.